A romp through Final Fantasy XIV: A Realm Reborn

First hands-on with the upcoming MMO

I’ve been dying to get my hands on A Realm Reborn. But, being an MMO, you need other people to really get a feel for the gameplay. It wasn’t much, but we’ve finally had our first hands-on for E3.

I was joined by several other members of the games media in a short romp through the world of Final Fantasy XIV: A Realm Reborn. We jumped into pre-rolled mid-level characters (about level 35 or so) to try our hand at some of the game’s new FATE battles. These Full Active Time Events have Square Enix jumping on the bandwagon with other recent MMO titles, giving players randomly generated public events that they can group together to tackle.

For example, a herd of Cactuar could invade a town, requiring all players to band together to fight them back. How great does that sound?

Our FATE battles were a bit less prickly. I chose to play as a conjurer, playing a healing/support role for a lancer, a gladiator, and and a couple of air-headed archers. We first teamed up to mow down some giant tortoises with ease for practice, but soon found ourselves in our first FATE event, where we stood on a shore, fending back waves of Marlboro (remember these bastards?) and other poison-happy creatures.

Wave after wave of these bastards kept us on our toes; I kept busy on the status front, throwing out an Aero or Stone spell when the opportunity arose to help keep them down. 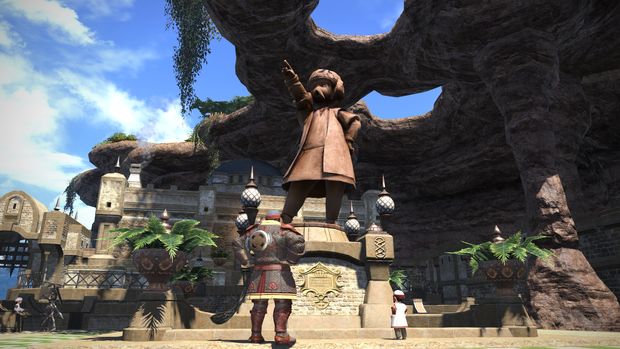 After finally fending off the last of them, we headed out into swamps toward another FATE event that had us going up against a huge rock golem. This creature had mountains of hit points, so it took us quite awhile to wear him down. I piled on the protect and healing spells while trying to watch my back from the wandering giant tortoises wandering around the area.

This battle gave us a chance to try out one of A Realm Reborn‘s new features, the Limit Break. Final Fantasy fans will remember this ability from Final Fantasy 7; just like in the classic RPG, Limit Breaks can be used after a meter is filled. The MMO version has the entire party sharing a meter, which becomes filled as you explore and fight. There are three levels to the Limit Breaks, with the greatest attacks being rewarded to parties that stick it out until level 3 is maxed out.

The actual Limit Break move is dependent on party composition as well as the party member that initiates it. For example, a Dragoon brings an Omnislash attack, while a Black Mage could summon Meteor. Our lancer made a huge dent in the rock golem’s HP bar with its level 3 Limit Break, but it still took us awhile to wear him down. While it was only a short taste, these FATE events were pretty fun to play through. 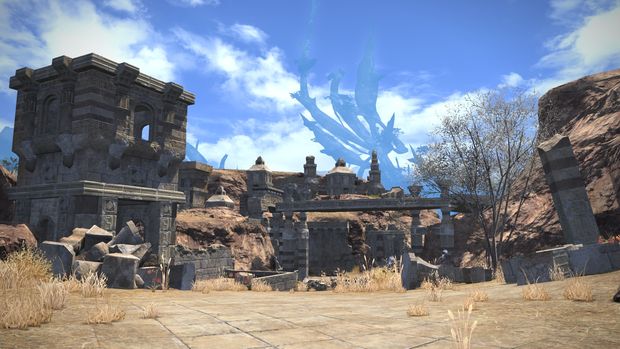 A Realm Reborn looked fantastic on what I am guessing were some pretty high end PCs; these things were spitting out some serious heat. But that’s not to say that it won’t look great on the PS3 — here’s hoping. While we didn’t have a chance to check out the PS3 version for this test, Square Enix says that they’re pushing the system to its limits with visual effects and total number of onscreen characters. Expect full dynamic lighting and particle effects as well.

And while we didn’t get to try it out, we did see a bit more of how the PS3 version will be controlled. Square Enix worked to make sure that A Realm Reborn felt similar to other console Final Fantasy games. The left analog stick controls movement while the right controls camera, as you’d expect. The UI across the bottom of the screen shows two groups of controls, with their placement corresponding to the d-pad directional buttons and face buttons. By using the L2/R2 buttons, players can swap through these groups, much like you would with hot bars. Square Enix says that this control scheme will also be available in the PC version for those that don’t feel like using a keyboard and mouse.

A Realm Reborn looks to be exactly what Final Fantasy fans would want from a franchise MMO. We’ve had just a small taste, but with Square Enix digging around in their past to bring back things like Limit Breaks, it feels like they’re on the right track. Expect to do battle with classic summons like Odin, Levithan, and Bahamut, and then earn the ability to use them as your own. Even things like Magitek armor and Chocobo AI pet companions will make an appearance.