Garages are passé now, it seems. Where once indie game developers would steal precious space from cars, lawnmowers, and bikes, they can now be found living up in a tree or, in the case of Danish developer BetaDwarf, squatting in a classroom.

“Fuck it, we’re going to skip [our] apartments and literally live at university,” Steffen Kabbelgaard and his team decided during development of their colorful co-op arena game, Forced. Risk, sacrifice, and no small amount of good fortune characterize the story of Forced‘s birth, a story that’s nearing its end as the team gears up for an October 24 launch.

It’s 2011 and two teaching assistants in Denmark’s Aalborg University are holding a secret meeting. One of the duo is Steffen Kabbelgaard, now CEO of BetaDwarf, and he and his partner gather the best artists and programmers from their classes to ply them with t-shirts and present their game idea. The presentation ends with the foundation of BetaDwarf and a team size of nine.

Six months on, development proves to be slower than anticipated. BetaDwarf is now spending most of the day at university, working on the game, and is struck with a cunning plan to focus the team and reduce its cost of living.

“We realized that during the summer vacation, nobody really used the class locales, and we moved in there, but we knew that after the summer people would probably use the teaching room,” Steffen tells me. But then BetaDwarf was the recipient of a second bout of good luck.

Nobody books BetaDwarf’s secret home and workplace for the semester, and the developer continues to live there, working on Forced amid their beds, fridges, microwaves, and sofas. With access to a gym, laundry facilities, baths, and internet, the team decide to get rid of their apartments and move in full-time. 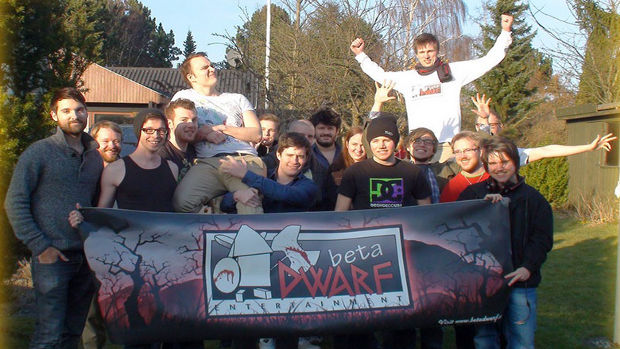 The semester of fortune comes to an end, and BetaDwarf are discovered — in their underwear, no less. “It was so insane. We had been so deep into the game and had forgotten all about what would happen,” Steffen says. “One random morning, a teacher went into the class locale and we were sitting there, brushing our teeth in our underwear and programming. It was extremely awkward. She just walked out without saying anything, and I felt I should run after her, but I was in boxer shorts and I couldn’t run down the hallway.”

BetaDwarf’s staff are evicted, and essentially homeless. Not a great situation to be in, but the University doesn’t press charges, indeed it actually promotes the studio’s ingenuity to tempt prospective game design students to study at the institution.

2012 finds the young studio in dire straits, absent either homes or an office. This might have been the closing chapter in BetaDwarf’s story, but an unexpected call from the Danish Film Institute acts as a life raft. The DFI awards BetaDwarf a $40,000 grant. “We went upstairs with all our gear and basically googled ‘the cheapest place in Denmark to live,’” Steffen says. “There was like three options. Two of them were ridiculously far away, and one was also ridiculously far away, but not as far away as the others, and we chose that.” Eight people crammed into one house, and development on Forced continued without any distractions.

BetaDwarf’s unusual path to finishing their game has paid off, with Forced almost being ready after a stint on Steam Early Access and a successful Kickstarter, but it’s not a route Steffen would recommend for everyone. “It’s been really risky, and it’s been really hard as well. We don’t really regret it, but we made really huge sacrifices to be part of this, and we didn’t have time for family or anything else.” 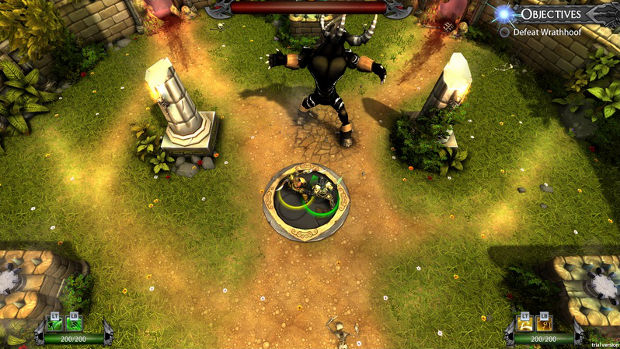 The studio’s penchant for “doing its own thing” comes through in Forced as well. A brief glimpse throws up all sorts of comparisons, from Diablo to Dota, but neither are particularly accurate, even though both of those franchises have inspired BetaDwarf. “Usually people look at the game and think it’s a MOBA, but then they realize that there’s no PvP, so they think it’s like aDiablo-style dungeon crawler,” Steffen explains. “But Diablo is really loot focused, whereas Forced is extremely skill focused. Basically, every single enemy attack can be avoided, and it’s your job to find out how. So in that way, it’s like an arcade game like Mega Man.“

Ostensibly, Forced is an arena battle game with a focus on co-op. Players are imprisoned, and must fight their way through multiple worlds and 25 arenas filled with enemies, environmental hazards, trials, and a variety of objectives. But that description doesn’t really do it justice, because it’s also a strange game of reverse football and comes with a full single-player campaign separate from the co-op mode.

The single-player mode sees players fight against different enemies and poses different challenges, so while the co-operative mode is undeniably the heart of Forced, there’s still plenty to do beyond that. Progress made in single-player is also separate from the co-op component. Levels won’t transfer over, offering more opportunities to experiment with new roles and start fresh.

Perhaps the most curious feature of Forced is the spirit mentor (check out the exclusive feature trailer slapped somewhere on this article to see it in action), a glowing orb that mocks and teaches combatants while also activating and deactivating shrines that provide buffs and also spew out environmental hazards — it’s also key to defeating boss enemies. “You control it by a button click, and then it floats towards your character and you have to utilize the path that it takes,” Steffen says. “It becomes like a reverse football: instead of kicking it, you call it. And that dynamic becomes hugely different from one, two, three, and four players.” 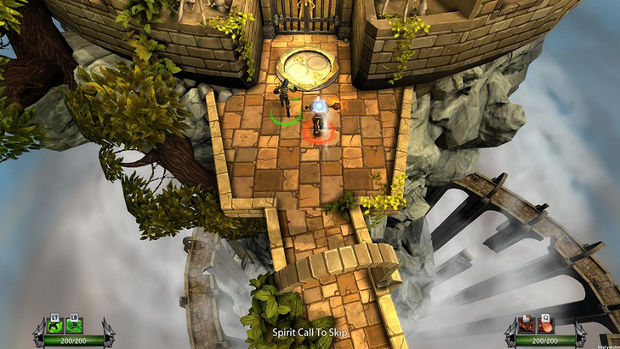 Not only does the spirit mentor dynamic change when different numbers of players are involved, BetaDwarf have also attempted to balance the game for co-op or single-player in more interesting ways than simply tweaking health or artificially increasing the difficulty. “We’ve seen too many co-op games where the developers decide to ramp up health to balance the gameplay, and we didn’t want to do that. So instead we invented a few new enemies that you’ll mostly see in multiplayer… and in that way some of the trials are totally different.”

One such enemy is the armored swarmer. Normally swarmers are weak enemies, easy to dispatch alone, but they can become quite dangerous in groups. The armored variation is much tougher, as the name suggest, but is a bit slower. When not near players, the armored swarmer gets a speed boost, propelling it towards its foe, ensuring that groups can surround players rapidly.

Online co-op is joined by a couch co-op mode, which thankfully doesn’t restrict players to tiny segments of the screen. The view zooms all the way out, and each participant shares the same view rather than squinting at one of four sections. And since couch co-op really requires a couch, BetaDwarf have designed Forced with controllers in mind and not just mouse and keyboard, so no desks required.

The 25 arenas, all with different objectives and themes, become progressively more challenging. Unlike a MOBA, abilities and perks do not suddenly vanish when a new match begins. When you unlock something, that’s it unlocked for the rest of the game, but these abilities do not make characters instantly more powerful — instead they provide utility and new synchronicities. It’s the slots that abilities and perks can be placed in that make combatants more deadly. As players progress, they unlock new slots, and new options for builds. 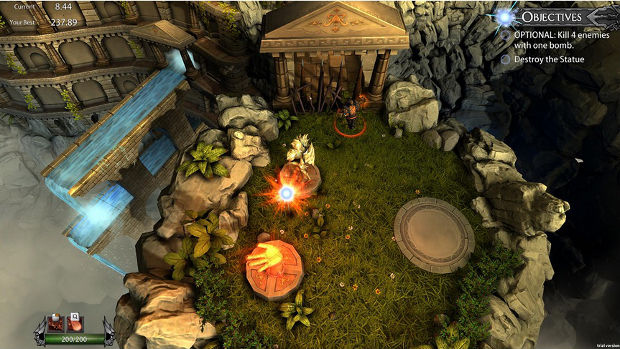 Four classes make up Forced‘s roster — the Frost Shield, Volcanic Hammer, Thunder Bow and Spirit Dagger — but they don’t conform to a specific role or restrict players to any given style. “The Frost Shield is what people usually think is the tank class… but he can definitely be the damage-dealer instead, where he chooses a perk and instantly that changes him completely because suddenly the shield becomes an offensive thing.” Steffen also notes that every character has a heal ability as well, so just as anyone can deal damage, they can all play a support role too.

Having all this utility will surely benefit a party of gladiators when faced with the diverse and deadly challenges arenas throw their way. BetaDwarf didn’t want to make players endlessly slaughter monsters, and as a result built an abundance of unique obstacles tied to different arenas. In one instance, Steffen explains, a gigantic grinder chases players across the arena, forcing them ever forward into a horde of foes.

It doesn’t sound like players will be able to get by being silent, as communication will be a necessity as parties juggle multiple obstacles. While hacking away at enemies they might also have to imbue the spirit mentor with explosive powers, throwing it between them and positioning it near statues that need to be blown up, and the whole time they’ll need to get to the right place, avoid the explosions, and keep fighting monsters.

Surprisingly, Steffen cites Valve’s Left 4 Dead as a major inspiration for Forced, mainly for the way that the cooperative experience is tackled. Teamwork is absolutely key to success, even to the point where BetaDwarf has removed features because they weren’t conducive to working together. In an earlier build of the game, the spirit mentor gave a bunch of buffs to the carrier, leading to players hogging the orb and not working together.

While I confess that my initial interest in BetaDwarf stemmed from its punk beginnings, I came away from my chat with Steffen fascinated by the game. Forced is a lot more ambitious than it seems at first glance and has the potential to provide a unique, dynamic cooperative experience. Also, I’m a sucker for gladiatorial combat.