BioShock Infinite's first DLC is out on Steam today

Clash in the Clouds is an arena-based combat game

We’re here folks! Breathe that big ol’ sigh of relief because by midday you’ll see BioShock Infinite‘s first piece of downloadable content, Clash in the Clouds, available for download on the PC through Steam.

Clash in the Clouds is an intense combat-oriented DLC where players can climb the leaderboards by beating up various enemies from BioShock Infinite. For some it’s been a long time coming, but I had patience and I certainly wasn’t disappointed with the time I spent playing Clash. 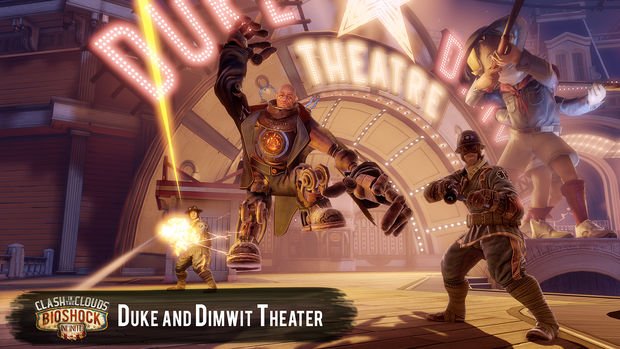 Clash in the Clouds does not tie into the storyline specifically but rather is a standalone arena-based combat game. You continue to play as Booker Dewitt with Elizabeth at your side, tearing the fabric of space and time to obtain useful items in battle (as usual).

The DLC consists of four maps (The OPS Zeal, Duke and Dimwit Theater, Raven’s Zone, Emporia Arcade) with each containing 15 encounters, or waves, of enemies. The waves get progressively more difficult and sometimes require a lot more strategy vs combat in the main game, especially as the enemies grow in number. 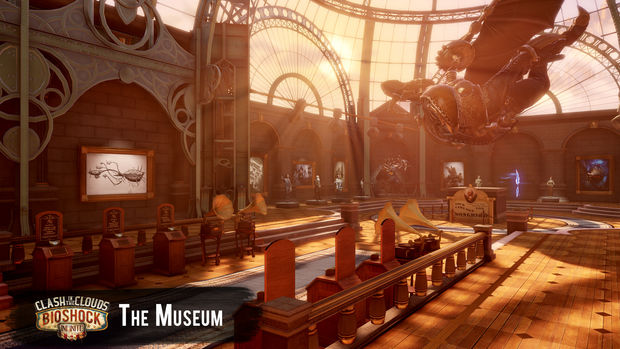 The beauty of Clash is that it can be fun for both hardcore arena players or for gamers who want a bit of challenge without the need to be ranked. If players can successfully beat all 15 waves without dying, they’ll be placed on the glorious leaderboards for all to see. If the player dies at any point, they can resume the game to continue collecting cash but won’t make it onto the rankings. Extra lives can be purchased at the office door in between waves, which allow players to spawn at the door with no penalty and at full health.

Players earn Silver Eagles at the end of each wave, and can also get bonus Eagles by killing enemies in various ways (headshots, vigor combos, etc). “Blue Ribbon Challenges” can also be attempted to earn cash bonuses throughout each wave. For example, a few of mine were to defeat enemies only with the hand cannon, or defeat enemies only using the skyline. At the end of each wave, health and salts replenish and you have the opportunity to stock up on new guns or buy upgrades with your money.

Silver Eagles can also be used to purchase artifacts from the Columbian Archaeological Society, a really neat-looking atrium with a giant bronze statue of Songbird hanging above. This was actually my favorite part about the DLC — you can buy character statues, individual songs playing on their own phonograph, Kinetoscopes, Voxophones, and concept art to fill out the space. There’s even something waiting for you when a certain duo is unlocked … but I won’t spoil the surprise. 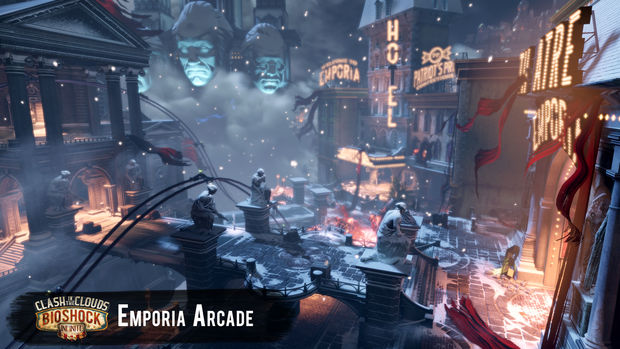 Overall I enjoyed my time with Clash in the Clouds. For $5, or included in your Season Pass purchase, you can’t really go wrong. It’s honestly worth it just to unlock some really cool story items from Infinite and test your combat skills when shit hits the fan.

Clash in the Clouds is coming at you later today on Steam, and will be released for the PlayStation 3 and Xbox 360 by the end of the week.

Burial at Sea, the next two downloadable content packs for BioShock Infinite, were also revealed to us, and this will be story-driven content that is set on the eve of Rapture’s downfall. Rapture being the setting of the original BioShock. You’ll even get to play as Elizabeth here. Check out the trailer and our impressions of that here.