It seems like yesterday when we were all huddling around the mysterious WebM videos floating around the internet. Showing a strange and unknown game resembling a Souls title, many people didn’t know what to make of it. The character looked unlike anything from Dark Souls or even Demon’s Souls, and the weaponry looked even more bizarre. But the more we saw, the more intrigued we all became. Tentatively called Project Beast, the footage showed a world in chaos, very much like the previous Souls titles.

During Sony’s E3 press conference, we finally got the official reveal of the game, now called Bloodborne, and what we saw was something far more bleak and depressing than anything the previous Souls titles could muster. Once more details began to surface, fans were curious to find many changes to standard gameplay.

But was this still a Souls game? Well, Destructoid was invited out to PlayStation HQ in San Mateo to play some of their gamescom offerings, and we got to spend some quality time with From Software’s next title.

Set in the city of Yharnam, players must trek through a plague ridden metropolis with its inhabitants driven mad by a mysterious disease. Somewhere inside the city houses a miracle cure for the affliction. Though many have tried, none have successfully found the cure and lived to use it. As a newcomer to the city, you must find your way through the labyrinthine streets of this Victorian nightmare. All the while slaying powerful foes and strengthening yourself in order to find the cure for the curse.

If you were worried that Bloodborne would deviate from the Souls formula, then you were mistaken. Based on my time with the game, From Software’s next is a Souls title through and through. Having said that, it manages to create a style that channels the best of Souls‘ foreboding and bleak atmosphere, while upping the level of dread considerably.

The new setting, moving beyond medieval fantasy, is now a nightmarish and even more depressing take on Victorian era Europe. The buildings and architecture are packed together while stretching far into the sky, carriages are strewn throughout the streets, and advanced mechanisms and clockwork technology power much of the city’s infrastructure. Yharnam is dark, dank, and not a kind place to be in. But it also offers the most visually impressive and interesting places From Software has created yet. The power of the PS4 has been put to great use here. This brief demo left me wanting to spend more time to explore the city, to see all the horror and madness that is waiting to come out.

Before our session began, we got the chance to choose between two different archetypes. The standard type utilizes the Saw Blade and Blunderbuss (as seen in the trailers and screenshots), while the heavy type uses an Axe and pistol combo. The ability to cover both distance and short-range combat is a blessing, and allows for some flexibility right out the game. With more focus on flexibility, this gives players more options, allowing them to switch things up on the fly. 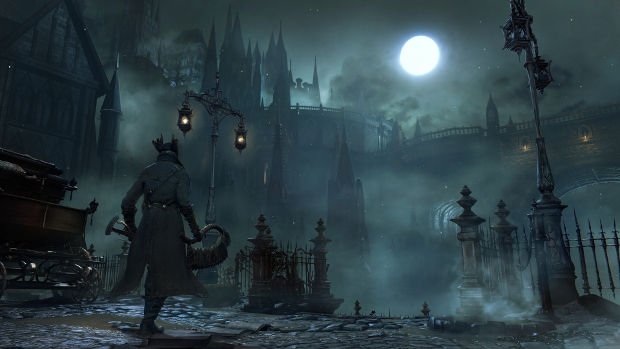 Wanting players to be more aggressive, From Software created a more agility focused combat system to put them on the offense. Shields and heavy armor are almost non-existent, so opting for a turtle fighting style is not really an option. When locking-on to an enemy, your dodge roll will turn into a dash maneuver, allowing you weave in and out of the fray with ease. If an enemy is about to attack, and you time your dash right, your character will evade directly to the side or even behind the opponent, leaving him open to devastating damage.

The left-handed items now offer more usefulness during combat, and some of which can be used effectively in tandem with your melee attacks. The firearms play a large focus in combat, and while it may seem like they can make situations easy for players who want to stay at range, know that ammo is limited and scarce, which forces players to make smart use of their guns. If you have the blunderbuss equipped, you can bunch enemies together with your melee attacks and finish them off with a close-range shot. Pistols have greater range than the blunderbuss, but greatly lack the attack power. 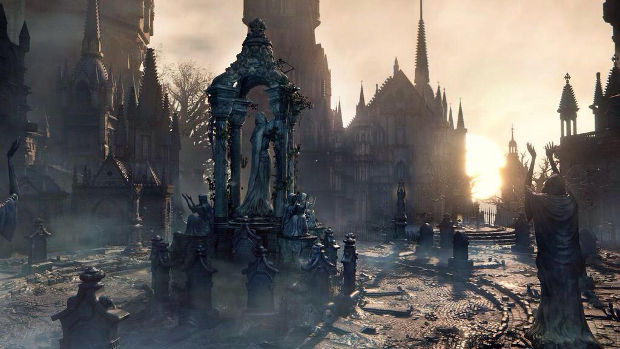 Moreover, firearms can stun enemies and open up their defenses. Called the Counter-shot, when you shoot an enemy about to attack, you’ll stun them and leave open to a devastating counter-attack. Think of this as Bloodborne’s take on the parry, but it’s way more brutal and satisfying to pull off.

To accommodate the more action oriented style, the controls have been altered slightly. The triangle button is now a dedicated healing button, which uses Blood Vials found throughout the city. Pressing L1 activates the weapon transformation, which alters the style of your right-handed weapon. For the Saw Blade, the blade extends out, giving you greater reach but slower attack speed and more stamina drain. For the Axe, the handle extends and changes the Axe into a Polearm weapon with greater reach. While one style is definitely more useful than the other, I found myself switching between the two in order to conserve stamina and maintain speed.

While the crazed individuals populating the city may seem like the mindless dreglings or the undead from previous Souls games, they’re far more intelligent and cunning, but also surprisingly sympathetic. Though they were once normal people, they’re still very much alive and can even communicate with the players. During several points in my session, some of the mad townsfolk shouted “Go Away!” as they charged at me with their weapons. This gave me some context to the situation, many acts of violence are because of the disease, which makes having to fight them somewhat conflicting. 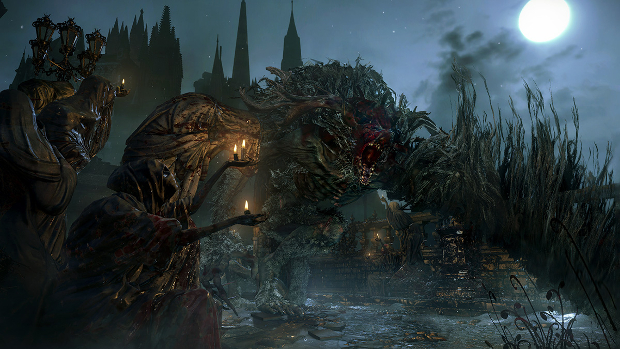 Unfortunately, pity won’t help you in your quest, and the diseased must be dealt. But they won’t go quietly. They’re far more intelligent and organized than common enemies, and they prefer to stay in numbers. In one of the more difficult parts of the demo, a courtyard filled with more than twelve townsfolk proved to be a challenge to get through. Five of them patrolled the alleyway near the courtyard in a pack, which forced me to take the stairs off to the side. Once I got the high ground, I was ambushed by two riflemen, which alerted the townsfolk on the ground.

Just when I was feeling pretty confident in my abilities (the true Souls curse), this situation put me on the ropes. I had to make several retreats, using several Blood Vials in the process, but eventually I cleared the group and proceeded to the upper levels of the city. While clearing through packs of large crippled crows, and a hulking behemoth wielding a cinder block, I eventually met my end at the hands of two werewolves guarding the way to the boss.

While my time with Bloodborne was brief, I found a lot to like about my trek through a Souls game set in a Victorian era nightmare. Bloodborne’s environments are both haunting and exciting. I’m curious to see what this game has in store for us. While many of the Souls staple oddities are still intact, like the crazy ragdoll for instance, breakable objects are oddly not. While things in the environment are breakable, smaller objects could not be broken for materials like in previous games (chairs, carriages, crates, etc). While it is not a deal breaker, it is a bit weird to say the least.

It’s very surprising to see how close the release date is. With an expected launch sometime in Q1 2015, we can explore the world of Bloodborne sooner than we think. With that said, Sony is still keeping things tightly under wraps, as we’re still in the dark about many details. But that’s likely for the best because if the full game is anything like what I played, then it’s best that we all go in not knowing what will come next.