Charging wildly into War of the Vikings

…Will get you killed. If you suck. Like me.

War of the Vikings, the close-quarters Vikings-versus-Saxons bloodbath, is in Early Access on Steam. Yesterday, it saw its biggest patch leading up to its early March release window. With it comes the content I got to test out last week.

To go along with the murder, there is now a persistent progression system (which will be reset at launch) and character customization, so everyone can fear the beard, or know of your reckoning by the brand on your bright pink shield.

It’s fun as hell. I didn’t want to stop playing it. I’d like to be playing it right now.

War of the Vikings let’s you play as the Vikings (the proper choice) or the filthy Saxons (the bad choice). They are mostly the same outside of aesthetic (and Saxons being dumb jerks) and feature three classes made distinct by their primary weapon (sword, axe, bow). Now, your standard warrior can pick up a bow in battle, but he wouldn’t be very effective with it. At the same time, an archer that picks up a shield has just made itself a much more formidable target.

This isn’t quite arcade/arena-style gut ’em up, either. This is a skill-based game, which extends down to the controls that have a bit of a learning curve. Either mouse button are used for either parrying or striking. Holding whichever you’re trying to do and mousing left, right, or down will yield a variety of blocks or blows. Just hammering away at an enemy with the same move isn’t going to do much, as your sword must meet meat — not metal or shield — to do any real damage.

If you’re feeling intimidated (perhaps it’s the beard?), this recent update also has a training mode to help acclimate you to the combat system. 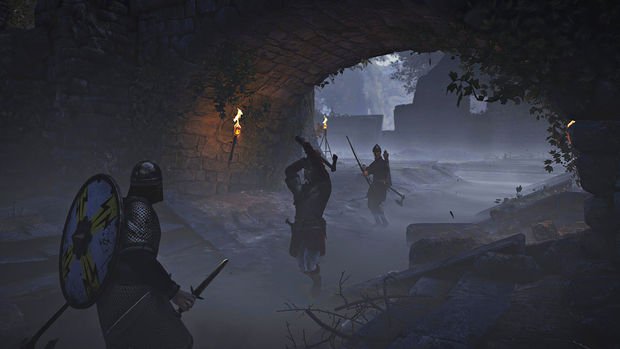 In my first few LAN matches I tried valiantly (yes, let’s go with valiantly) to show off the skills I’d rushed through learning in the training mode. My strikes were awkward, more probing than expert, as if I were fumbling around in the dark. I struggled to line up the charged special strikes, while my basic blows glanced off shields.

I would tend to employ my secondary weapon, a throwing axe, in the hopes of getting some damage done before I would clash with other players. Eventually, I settled into a fitting role as an archer, which carries a much more familiar shooter interface.

There, I would reign, arcing 80-yard bow shots like I was Kobe, finishing off downed opponents before they could be revived, and occasionally leading the team in kills. I will need more time to hone my axe and sword skills, but nailing a Saxon in the knee as he charges towards you, bringing him to the ground, was mighty satisfying.

Oh, and small-stage, no-respawn team deathmatch is the best. 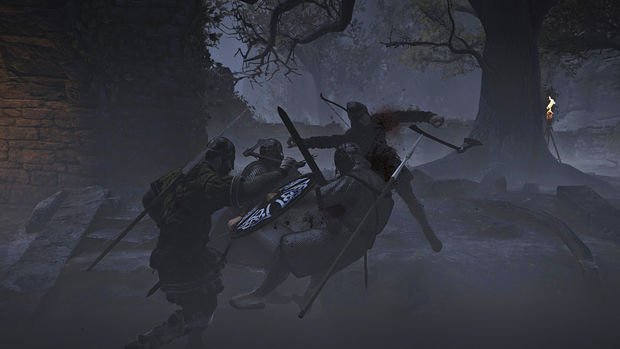 The easiest way to tell friend and foe apart was the different-colored names, but once we all got into the customization page, things got a bit easier. I outfitted my viking with a flowing green cloak (which keeps your head from rolling away upon decapitation) and a shield modeled after the Italian flag. Oh, and a beard. I acquiesced to beard hype just this once. It felt right.

Women warriors are also on their way, though they only exist as unplayable assets for the moment. The utilitarian Viking culture allowed women to solider and they will look similarly dressed as their male counterparts. On the Saxon side, the women are mildly more ornate, presumed to have come from monied backgrounds that would afford them the opportunity to go out a’killing.

War of the Vikings is technically pick up and play. You can buy it and play as an archer or swing limply about the battlefield and occasionally land some good hits. You can, at the least, serve as a warm body to help capture nodes in the more strategic levels. But there’s enough depth to keep you playing and to keep one-on-one battles an exciting, evenly-matched, back-and-forth affair.

It always sort of bothered me in action games when you’d do damage by basically phasing a weapon through an enemy, rather than making solid contact and it having a reasonable effect. It’s why Bushido Blade was so cool. Every time I loosed an arrow and it ineptly plunked on a shield, I had to remember I was trying to shoot (and kill) my opponent, not just a character model.

Whether you want to dive into the tail end of early access of wait until the full release, War of the Vikings is damn good, different multiplayer fun.