Capcom are showing their upcoming next-gen game, Deep Down, to the public for the first time here at Tokyo Game Show. This game captured our imaginations following a brief tease during February’s PS4 announcement in New York with its flashy visuals and mysterious concepts. Perhaps that’s why the booth had wait times of 3 hours or more at Tokyo Game Show today.

I didn’t have to wait, but if I did I would have been a bit disappointed by the TGS demo for Deep Down. It’s not…well, deep at all. And it’s short. It’s a tease for a game that I’m hoping will be pretty good. 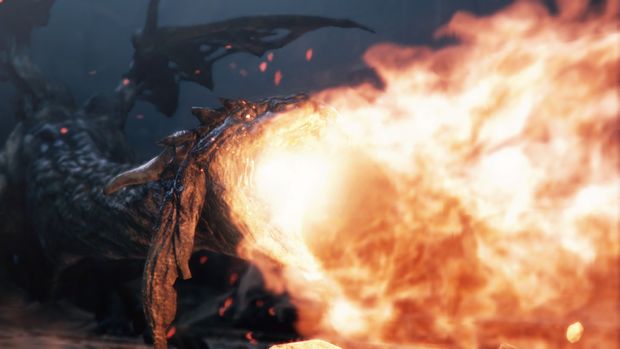 At least it’s beautiful. Stupid beautiful. From the very first screen — which had me choosing one of two heroes — I was impressed. High quality textures, crazy realistic lighting (the sunlight is gorgeous), detailed animations — this will end up being one heck of a looker when it’s all said and done.

I was quickly swept away to some world that materialized before my eyes after setup. In this place, which I assume was procedurally generated, dark caverns hid secret passageways filled with treasure. They were also filled with pig-like orcs that had gross skin that glistened in what little sunlight managed to shine through the cracks on the cavern roof. Even the ugliest things are pretty in Deep Down.

The short demo centered entirely around exploration and combat. Movement is slow and deliberate, which fits when you’re creeping around grounds populated with huge beasts. I did my best to avoid encounters, but when countered I relied on my only weapon, a spear. 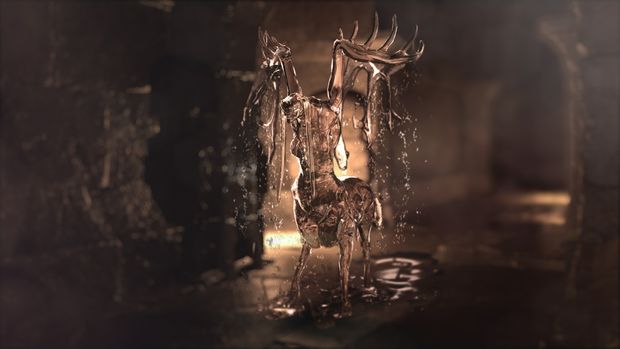 Combat with this spear is slow, but still satisfying. Shoulder buttons have your character stabbing forward with a lunge or cautiously pulling back while defended. Attacks feel heavy and powerful, but the movement is slow, which has you vulnerable after a jab. Oh, and there’s nothing in the way of shields. Those that only have patience for hack and slash type games need not apply.

One other shoulder button lets you move between a few of the bonus moves you pick before entering the world. I picked a strong half-circle weapon swing early on, and that ended up saving me in the first few battles. Careful spear stabs and evades had me poking off only about 100-150 hit points at a time — not enough to feel like I would survive the battle. But the half-circle swing connected beautifully when I used it out of desperation, taking off 575 hit points the first time. Too bad I only had three instances of these moves to use.

Farther in the cave I managed to climb a ladder and move behind a flame-throwing obstacle to uncover a treasure chest. But when I opened the chest another flame outlet blasted me in the face, knocking me back. Someone at Capcom has a sense of humor. 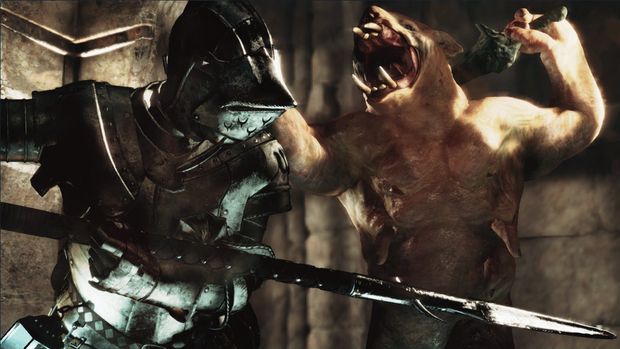 I pushed back when orcs managed to find me later on, using my spear and the few magic attacks (flame balls) I had left. Things were fine until I ended up turning a corner to find myself in a room with three of the beasts. I felt like I was doing a nice job of moving around and stabbing to wear them down, but when cornered I lost control. I enjoyed that the camera shifted from third-person to first-person when I was cornered. This added to the tension nicely.

And if that’s too much tension for you, there’s an optional “casual mode” available.

This was fun, but it was all over before I knew it. As much as I dug the slow, careful combat and the stunning environments, there wasn’t enough to the TGS Deep Down demo to go off of. Only one enemy type and a very short time in a dungeon served as little more than a tease.

There’s a kind of Dark Souls thing going on with Deep Down, which is fine by me. Somewhere deep down (excuse the pun) I was hoping for something more like Dragon’s Dogma. Not even close, though. But this is neat too. I just hope that there’s a bit more depth than what was shown at TGS this week.