Disney Infinity 3.0 expands with the Star Wars and Inside Out playsets

It’s a small world after all

Who knew that Disney’s strange and bizarre mishmash of characters into one large game would turn out to be such a big hit? I know, a Disney title with a bunch of Pixar, film, and legacy characters would’ve sold regardless, but this experiment seemed totally out of left field when it was first unveiled, and it was a certainly a gamble on part of Disney Interactive. But since its debut in 2013, Disney Infinity has steadily become a pretty popular title among longtime fans of Disney, and with younger audiences experiencing the universe of the iconic mouse for the first time.

But the developers behind this mash-up haven’t been resting on their laurels, and they’ve been gradually updating and releasing expansions for Infinity. With the launch of Disney Infinity 3.0 set for this August, the folks at Disney Interactive have been steadily showing off what to expect with the next major expansion for their massive playground.During a recent visit to Pixar Animation Studios, I got the opportunity to watch an advance screening of the upcoming Inside Out, and spent some time with John Vignocchi,the vice president of production for Disney Interactive, and the general manager of Avalanche Software John Blackburn to discuss the evolution of Disney Infinity and what to expect with the launch of 3.0.

If you thought that the current roster of characters in this title was large enough, then you haven’t seen anything yet. 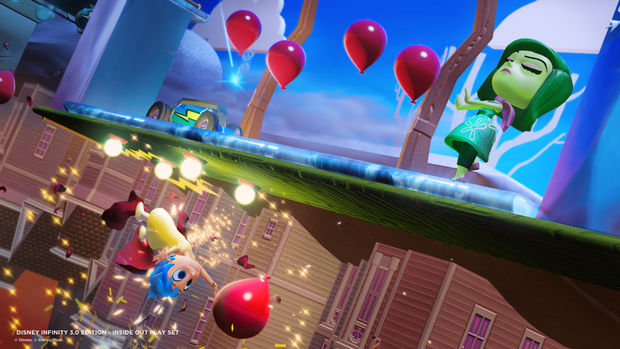 For those who aren’t familiar, or maybe just a bit confused about what Disney Infinity is, this title brings players into an open world and unified experience to craft unique and original playgrounds for Disney characters from the past and present. Much like the Skylanders series, characters are acquire by purchasing actual figurines that can be uploaded into the game via a world disc, a real world scanner. While you can create levels and unique scenarios and share them with others online, you can also dive into unique playsets centered around specific Disney films and television shows.

In its third year now, Disney Infinity has seen a number of upgrades and additions. With last year’s expansion introducing Marvelcharacters, they’ve also spent some time upgrading the gameplay and general design. In order to do this, they recruited help from independent developers such as Ninja Theory, Sumo Digital, and United Front Games where they worked on the key areas of combat, racing, and additional character support respectively. With general development handled by Avalanche Software (note: not the same Avalanche behind Just Cause), they’ve found the creation of Disney Infinity to be a rewarding and satisfying experience.

“The two words that come to mind are ‘humbling’ and ‘gratifying,” said the GM of Avalanche Software John Blackburn while reflecting on his work on Disney Infinity. “I feel so fortunate to work with all these brands, and it’s a dream come true in a lot of ways[…] I’m pretty happy that people have responded to it in the way that have, and have accepted it and are looking forward to the new versions right now. I want to make sure we’re doing a good enough job that we’re really trying to make high quality kids and family entertainment, because that’s been more and more difficult as a business to do. So it’s very gratifying to see that we’re doing it right.” 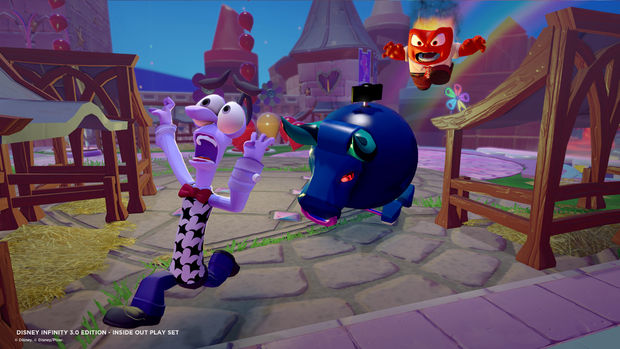 With the 3.0 expansion, new environments and characters will be added to the core game, such as the recently announced Star Wars: Twilight of the Republic (based on the prequel trilogy), Rise Against the Empire(original trilogy), The Force Awakens,and also Pixar’sInside Out playsets. While Star Wars will be largely combat and vehicle focused experiences, Inside Out will experiment more with platforming in surreal environments. Much like the film, the gameplay centers around the emotional state of a young girl named Riley and her changing perception and feelings.

Set sometime after the film, players take control of Riley’s emotions Joy, Sadness, Disgust, Anger, and Fear, when she experiences a nightmare after falling asleep during a scary movie. The playset focuses on platforming gameplay through Riley’s dreamscape, where environments and enemies take on a variety of different properties, such as warped gravity and the ground turning into hot lava. Each character has their own unique abilities and skills which will serve them throughout the adventure.

After seeing the movie, I was itching for another trip into the bizarre and evocative world from Inside Out, and the Disney Infinity playset serves a great follow up to the film as it’s basically the sequel to the film. Moreover, it fleshes out many of the settings and areas from the film, such as the dream productions studio where Riley’s subconscious craft her dreams by way of old school film production. It’s a very colorful and imaginative world, and it’s likely the most unique playset Disney Infinity has had yet. The devs at Disney Interactive were very excited about what the new playsets can offer. 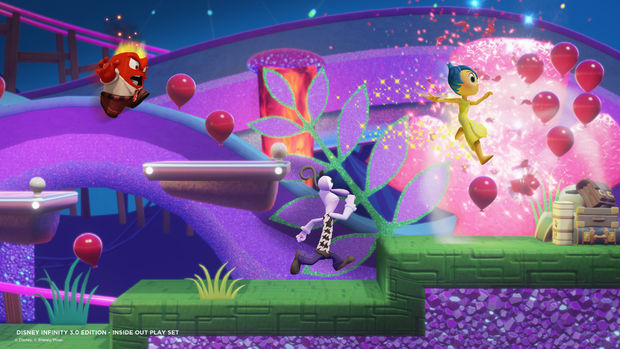 “Every year a new fan is born,” explained the VP of production John Vignocchi. “We’re sitting here in the hallowed halls of Pixar, and everyone there will be someone who sees Toy Story for the first time, and we want to make sure that when they pick up Buzz Lightyear, or another favorite character, and when they play with them inside of Infinity, that he is just as cool as he was in the film.”

Even though I’ve only had some minor experience with Disney Infinity, I was quite surprised with the creativity found in these playsets. Perhaps this was coming off of my high after seeing Inside Out a month early, but I was very pleased with the translation from film to game. With the writers and directors from the film working with the devs, along with the same voice cast including Amy Poehler and Bill Hader, they wanted to ensure that it would be as faithful as possible.

It’s pretty crazy to see how much Disney Infinity has grown over the years. What was once a strange experiment trying to catch on to the Minecraft and Skylanders craze, has now turned into a title that’s really come into its own. It’s pretty impressive to see how much detail and content is packed in the title already, and with the new 3.0 expansion hitting this Fall, the Disney universe is about to get a bit bigger for fans to explore.