Driveclub has the best dynamic weather engine I've ever seen

At E3 yesterday, Evolution Studios showed off a brand new build of Driveclubthat highlights their impressive weather simulation system. This build was so new that it needed to be streamed over from the art director’s computer to a PS4 development kit. They showed some stunning, absolutely photorealistic visuals running in real time in both Scotland and Norway.

Driveclub already looked great, but this weather system takes it over the top.

Loch Duich’s track is in a rocky valley. At the set early morning time, clouds covered the sky, and haze set into the mountains. Rays were beginning to peek through the clouds, filling the sky with a warm light, despite the heavy clouding. But that changed quickly when Evolution gradually introduced rain in the simulation.

Seeing how the rain naturally progressed from a slight drizzling to a heavy downpour really showed the power of their weather system; it looked as real as any rainstorm starting that I’ve ever seen. As the moisture picked up, the lighting began to change through the clouds. Realistic drops started to spatter on the car’s hood and run up toward the windshield as the car continued down the track.

As the rain became heavier, tire marks cut into the fresh road wetness. Rain drops flew directly toward the windshield in a believable way. 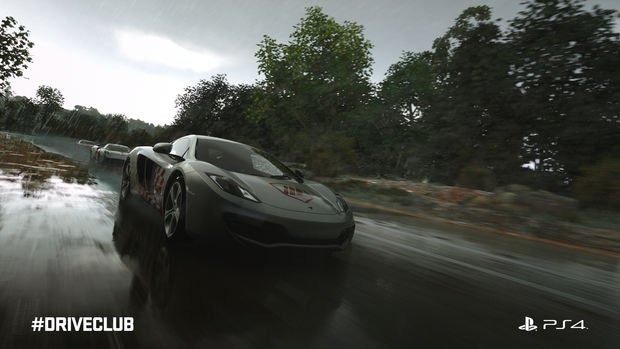 A paused flyaround made the race scene look like a frozen scene from a movie. Surfaces and grass on the mountains were wet, puddles showed ripples, and water sat around rocks naturally. I couldn’t believe how real the mountains in the distance looked, cutting through the haze and backlit by the sun. Rain water from the pack ahead sprayed backwards.

Evolution switched the scene to nighttime and we got to see how the rain picked up the headlights and taillights. Drops flying at the windshield heightened the sense of speed. Each drop took light and reflected it a bit. Even roadsigns reflected light convincingly. 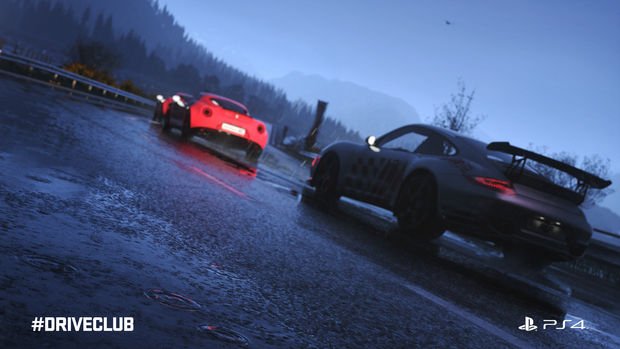 We also saw snow in both daylight and at night in Norway. Ominous dark skies changed to a soft blue-purple as snow began to fall. Piles built up on the sides of the road, and the melting snow made the street shine with a reflective gloss.

Evolution says that the variety that the weather system of Driveclub lets players revisit tracks over and over again, seeing it in new ways every time.

This weather system won’t be on the disc at launch, but it’ll come soon after as a free update.

Unfortunately, all I have are are pictures. They do a great job of showing how realistic the weather system makes the scenes look, but seeing it in action is a real treat. Let’s hope they release a video soon.