Half as good as you remember

Half-Life was like a magic trick. It was a game you could show to people who weren’t gamers and they’d get into it, a gateway drug. A real game (not some glorified puzzle book like Myst) that had the cinematic flair and presentation to suck all sorts of people into it. It was that train ride at the start of the game, casting Gordon Freeman as a dude with an interesting, but ultimately mundane job.

It was how you didn’t get a gun in your hand until almost an hour deep into the game. It was the semi-believable lab environment that relied on you looking around for clues and direction in the world, finding vents and trying to worm your way through a building given over to chaos. These ideas are old hat now, but in 1998 they were all groundbreaking.

For all my praise, I never actually finished it. I petered out on the game about two thirds of the way in because, well, Counter-Strike. I was a teenage boy who just discovered the joys of online multiplayer and I dove headfirst into the swimming pool of guns, hostages, bombs, and constant unending smack talk that made Counter-Strike what it was. Then Day of Defeat came out and I lost a year or more of my life storming beaches and saying “Bren gun” more times than anybody should ever have cause to and never quite got back to the New Mexico laboratory and Freeman’s adventures. I left the colorful, weird, just askew of reality world of Half-Life to go shoot people in muddy brown and gray maps. In the years since that decision always made me feel a little ashamed. 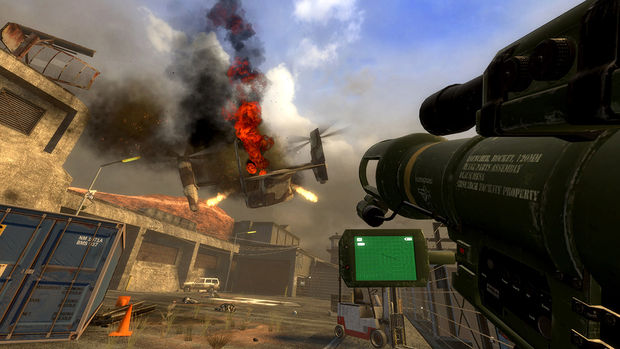 Now that I’ve had a chance to replay the original (selectively edited)Half-Lifethrough the incredible reproduction effort ofBlack Mesa(which had its first part released roughly three years ago), I’m not sure that choice was so wrong. In the end I think I broke even.Half-Lifewas a monumental game that will always be rightfully remembered as a masterpiece for its time, but its probably not as fun as you remember it (headshots on the other hand are, and forever will be, a timeless source of joy).

First thing’s first, the Crowbar Collective has done an astounding job of dragging Half-Life into the modern age. This is not a mere port like Half-Life Source which used all the same assets as the original with a bit of spit and polish added in the form of a higher resolution and some dynamic lighting. Black Mesa is a remake, built from the ground up to fully realize the vision of what Half-Life could be on modern machines.

More than a straight remake, the Crowbar Collective has played with the nuts and bolts of the game. Black Mesa rebuilds, trims, and expands different parts of the original for a smoother experience, while still staying true to what fundamentally made Half-Life what it was. There are new puzzles to work through, new and expanded areas to explore, and the availability of ammo and supplies has been bumped and nudged by a team that has spent ages agonizing over the pacing of the game.

Action scenes are frantic and aggressive, with plenty of ammo doled out to deal with the additional enemies and larger set-pieces provided by Black Mesa. But when the action slows down and Gordon is guided towards evasion and caution, supplies dip to an almost survival horror level of scarcity. The push and pull of tension and action, going from a rat in the walls to a one-man army was one of the most intriguing things about Half-Life, and Black Mesa nails it better than the original. 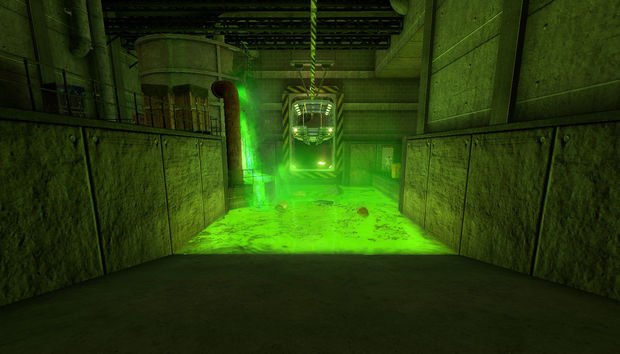 Some areas like the On A Rail sequence that infamously overstayed its welcome in the original, benefit from editing. Sometimes more isn’t always better and Black Mesa makes some smart cuts getting rid of the fluffier and more frustrating aspects of the original. All of the edits are an improvement to the game. In fact, I’d say they could have probably brandished the razor around a bit more.

Maybe we were just more tolerant of rampant amounts of bullshit back in 1998. Or, I suspect our memories of Half-Life benefit from a healthy helping of nostalgia and a lofty appreciation for everything that game did for modern game design. Half-Life basically wrote the book on immersive storytelling, first person exploration and strategically minded A.I for enemies, it had to be fun, right?

There are great times to be had in Black Mesa. When the game works, you can easily tell why Half-Life is so highly regarded as a classic. But then there is a looming dark side; a great number of hours when the game stubbornly refuses to be fun. The overly long underwater sequences that have you searching about in the darkness for some nook or cranny you missed as the last of your oxygen bubbles out of your lungs. The obnoxious clunkiness of trying to just MOVE around on physics enabled debris, let alone when the game demands you try to make a specific jump or escape from a screen rattling auto-turret under those conditions. The arbitrary insta-kill traps and monsters that force you back into loading screens and more than a couple “gotcha” moments that you couldn’t hope to avoid without active precognitive abilities.

Even with careful editing and a mind towards evening out the pace of the original, Black Mesa still traffics in an almost unconscionable amount of backtracking and finagling. There were several sequences where the solution to the predicament I was in was so awkward and stilted that I was sure I was doing it wrong. Of particular disdain was a protracted sequence set in a waste disposal facility that merged all the “joys” of water exploration, insta-death traps, pinpoint jumping between moving conveyor belts and confusing map design into a single ultra dense black-hole of anti-fun so terribly dark and spirit crushing that I’m still not sure I fully escaped from it. 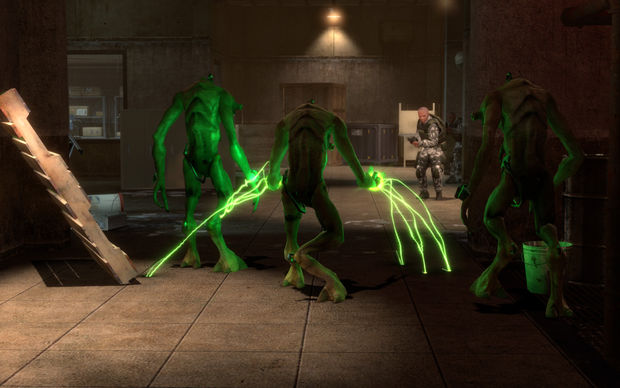 Maybe I’m being tough on it, but I remember Half-Life being smarter. I remember liking its world and characters better. Maybe it’s age or maybe games have just moved on, but this time around I was more exasperated than amused by the shenanigans of the Lambda research team. The game has one joke — you wander up to some poindexter in a lab coat, he says something silly/smug/abrasive, then immediately runs headlong into bullets/fire/devouring jaws (whatever option would make what he said seem more ironic).

I like to imagine Freeman giving the leftover blood smear a knowing smirk each time. Granted, it’s a funny goof the first two or three times it comes up, but when you’re nine hours deep into the game and Professor Egghead is still predictably blundering into the crossfire, the dismemberment gets a little rote.

I think its interesting that almost all of my criticism for Black Mesa is directly related to content from the original Half-Life. Every other effort is fantastic. This game looks great, especially considering its roots as a community driven mod. The soundtrack of original compositions is fucking banging. Every edit and change they made to the game was for the better. It almost makes me wish Black Mesa wasn’t a remake-with-cuts of Half-Life. I wonder if the team would have been better served making their own thing, or maybe a “inspired by the events of Half-Life” complete re-imagining of the original game.

The way I see it, there are two potential audiences for Black Mesa. There are the players who missed the original in its heyday because they were too young, or didn’t have a PC, or thought Freeman’s goatee on the box art made him look like a barista stooge, but love Valve’s other games and want to check out the legendary classic that started it all. Then, you also have the true-blue fans of the original, the generation that cut their teeth on Half-Life and remember it as a wonderful and mind expanding experience who would love to recapture the joy of those heady days. 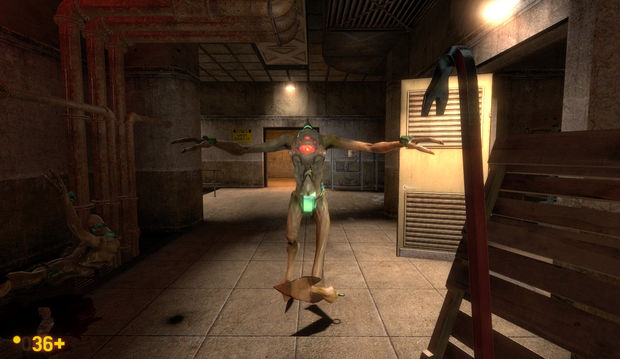 I’m in the slightly uncomfortable position of telling both of those camps that they can probably take a pass on Black Mesa, even though I truly respect the work that the Crowbar Collective team has done with it.

If you want to play a great Half-Life game that has aged fairly well, Half-Life 2 and its accompanying chapters are fantastic and Valve practically gives them out every Steam sale. Those games have all the best parts of the original Half-Life, while cutting out most of the chaff that bogs it down. If you didn’t play Half-Life back in the day, I can’t really imagine someone enjoying it as a game. Maybe as an academic curiosity, but not as a play experience.

If you absolutely loved the original, you may very well find something worthwhile in Black Mesa. It really is the singular best way to play Half-Life. That said, you could also find something you don’t like. A terrible truth, an awful secret, the knowledge that one of your favorite games is actually kind of a pain in the ass to play. It might be best to leave those pleasant memories as they are.

There is still more Black Mesa to come; the game is in early access and right now the story concludes on a cliffhanger right before the Xen levels, where Freeman is thrust into an alien world of annoying platform jumping and floating alien bastards. The Crowbar Collective is actively working on that final chapter and plans to include it in the full release. Considering that even the most stalwart fans of the original generally concede that “the game was perfect (except for the Xen levels)” I don’t think those last levels will really swing my personal opinion on the game. I will say this though, I can’t wait for whatever the Crowbar Collective does next.