InParty Hard, you break up raucous parties by committing mass murder. Party HardTycoonis a spin-off taking place in the same world with the same irreverence. Although I never got to see the knife-wielding maniac from the original game, I’m choosing to believe at least one of my parties ended in mayhem, just like I’m choosing to believe both games have Andrew W.K.’s blessing.

I’m not much of a partier in any sense of the word, but I do know my management sims, and this one was described as being similar toTheme Hospital, a game I keep going back to even a decade after its initial release. Party Hard Tycoon is much less frantic, but I can understand the comparison, especially in terms of managing yourspace and your budget. The fact that it shares some similarities withTheme Hospital is a good point of reference if you’re considering this game. 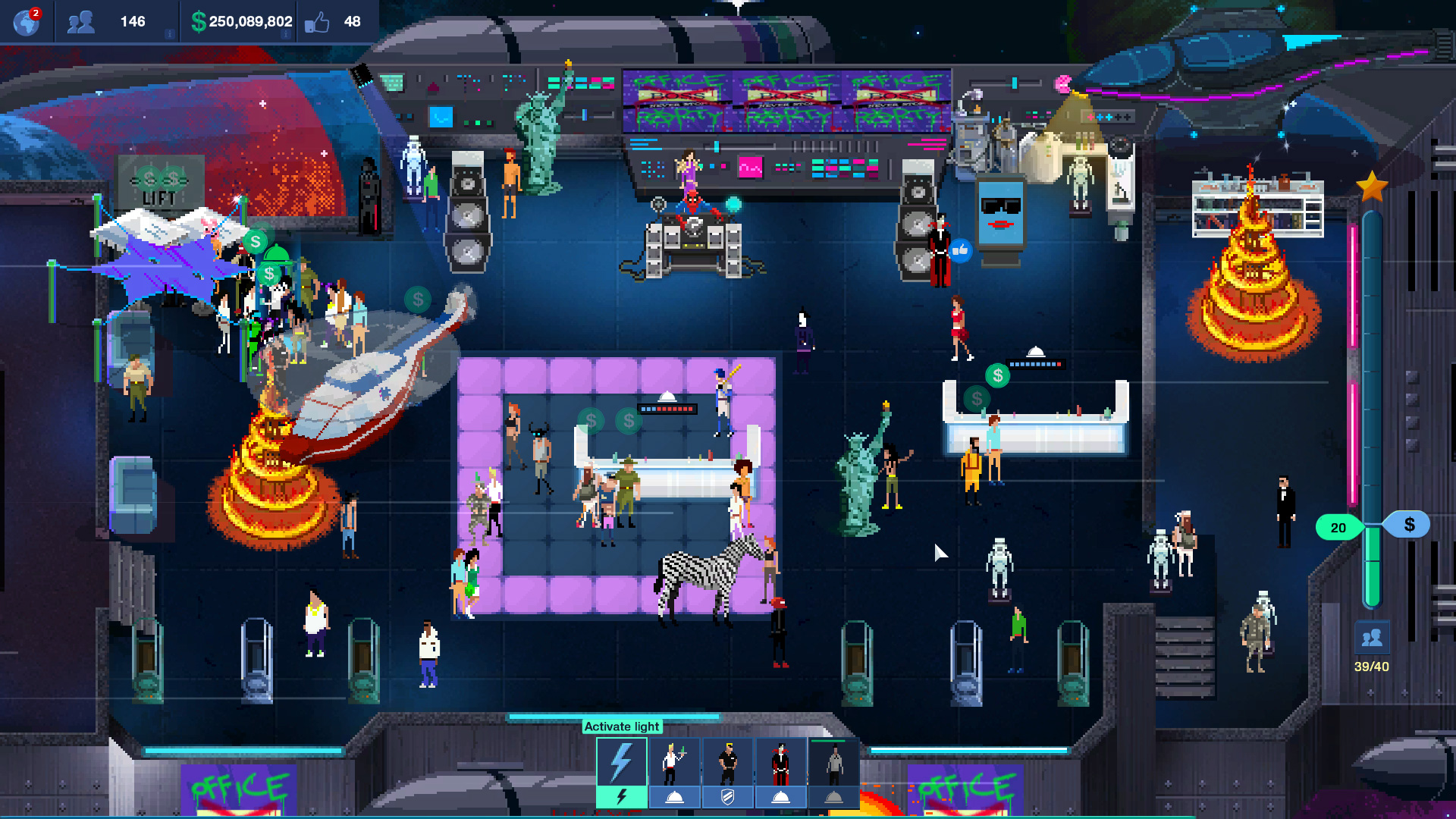 In this colorful retro management sim, you’re a fledgling party producer taken under the wing of a more established producer who makes it clear that she has better things to do than help you. She’s in charge of the tutorial, presented through text messages that pop up in your inbox. She’ll explain a few things and then give you an objective, like setting up a light show or making sure at least 10 people show up to your party. If you succeed, she’ll reward you with cash and extra partygoers.

I would recommend sticking with the tutorial not only for the rewards but also because nothing is explained otherwise. Some of the mechanics aren’t easy to decipher early on, and there aren’t many tooltips to help you. Even with the tutorial, like most management sims, you’ll pick up on the game’s intricacies simply by playing it enough.

Similar to other tycoon games, your goal is to widen your area of influence. In this game, that translates to owning more venues. You start with only a couple, but you’ll earn more as you progress and gain the ability to host higher-grade parties, which means more resources and money to spend. To get to that point, the game operates on two major mechanics: social media likes and hype. Likes are self-explanatory. The more successful your party is, the more likes you’ll earn, netting you more fans who will show up at future parties.

Hype determines the success of your party. You accumulate it by placing entertaining items and hiring personnel who encourage maximum fun. Not enough hype and people will leave, complaining to their friends about how sad your shindig was. Word will spread, no one else will come, and you’ll have enough leftover alcohol to drown your sorrows in.

It took me a few restarts before I got to the point where I wasn’t losing money on every party. You’ll learn by trial-and-error and it’s okay if you lose out on a few gigs, but outright going bankrupt makes things rough. Don’t go into the game expecting to host the craziest party imaginable right off the bat. I quickly learned to start out spending the bare minimum — speakers for every room, a beer keg, and some seating. As your parties grow more popular and lucrative, you can buy fancy decor, host parties at flashier venues, and become the Party God. 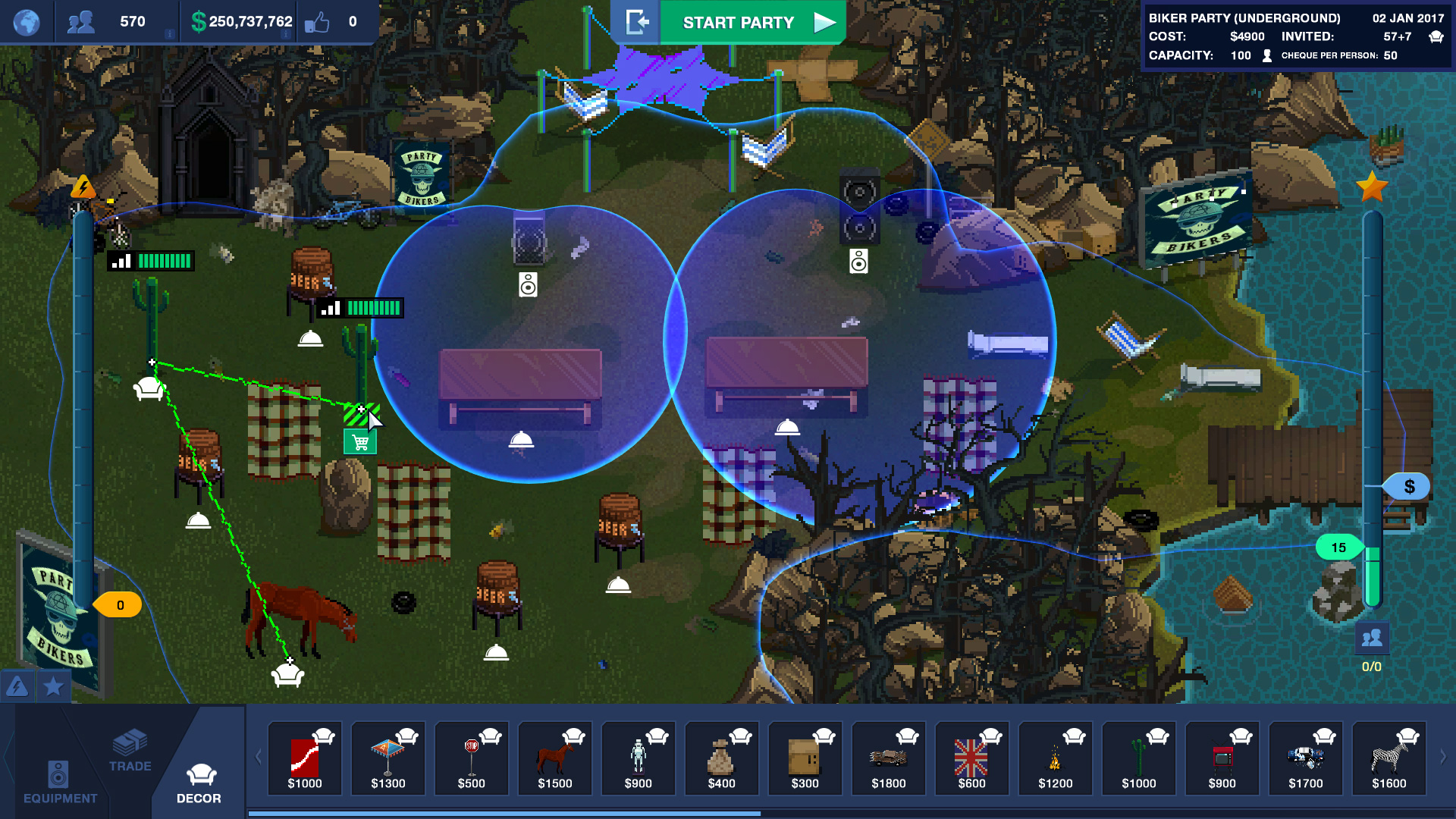 You want to aim for that sweet spot — the right combination of venue, marketing, entertainment, goods, and personnel. If you do that, you might just hit the top of the hype meter, and that’s when things really get crazy. This game is all about fun, and it reflects that with style and a killer soundtrack.

Partygoers and events are randomized. You’ll see cameos from pop culture icons, who you often have to send your security after.You’ll also get texts from quirky characters who will give you extra objectives, adding some nice variation to the endless partying. There’s a good dose of comedy in both the party events and the character texts, and it should probably go without saying that if you liked the campy humor of Party Hard, you’ll enjoy it here too.

My biggest issue with this game is the same one I’ve had with a few other management sims, which is that it’s interesting and enjoyable while you’re still figuring it out, but then it becomes repetitive quickly. Once you have the mechanics down, the complexity feels lost and the parties start to become boring. It would benefit from someadditional content, whether that’s more events at parties or extra gameplay modes. 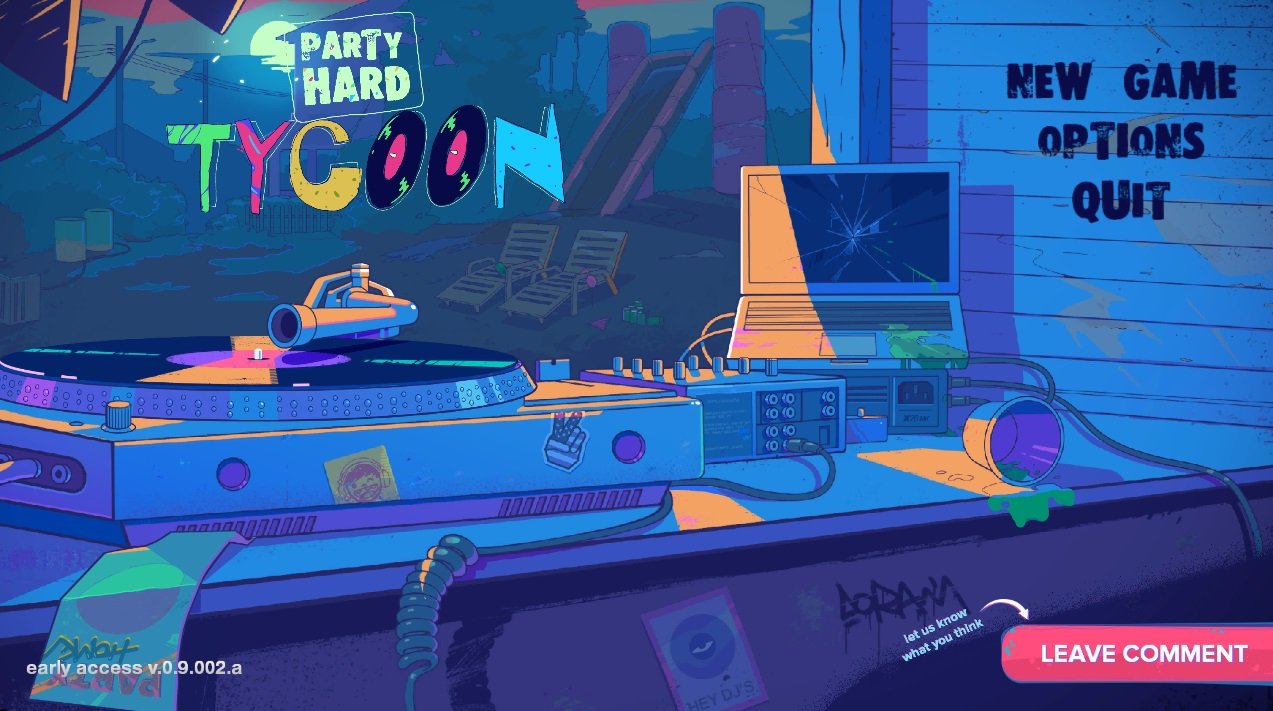 Perhaps the repetition can be viewed as an allegory for the thrill of the party lifestyle wearing off after a while, leading you on a quest for meaning before you inevitably make your way back to the dance floor. In other words, I’m guessing I’ll keep playing this until it gets old, take a break from it, and then eventually go back to it. Same asTheme Hospital, but maybe not quite as much.

Party Hard Tycoon is expected to be in Early Access for three months according to the Steam page, where you can purchase it for 10% off at $8.99 until October 26. With Early Access games, it’s important to keep an eye onthe Steam Communitybecause fixes and improvements are constantly being made, and the devs are listening to feedback. A few of the issues I had during my playthrough have already been addressed, and as of the most recent update, the Party Hard Killer is ready to crash and slash your party.

[This Early Access review is based on a retail build of the game provided by the publisher.]