I had the opportunity to visit Boss Key Productions’ studio in Raleigh, North Carolina, and I saw a lot of promise in LawBreakers. Cliff Blesziski’s still fledgling studio has a lot of power behind it, so much so that I was wowed by the raw talent of the art department in particular, among a mix of up and coming and seasoned developers.

But LawBreakersjust didn’t make an impact on the industry. Maybe it was the marketing, the pricepoint, the over-saturation of hero shooters, the timing, or the spread across three platforms for a brand new IP, but either way it’s basically a done deal now.

Looking forward Cliff and his team are anxious to step into yet another popular genre right before the floodgates open — enter Radical Heights, the ’80s themed battle royale. 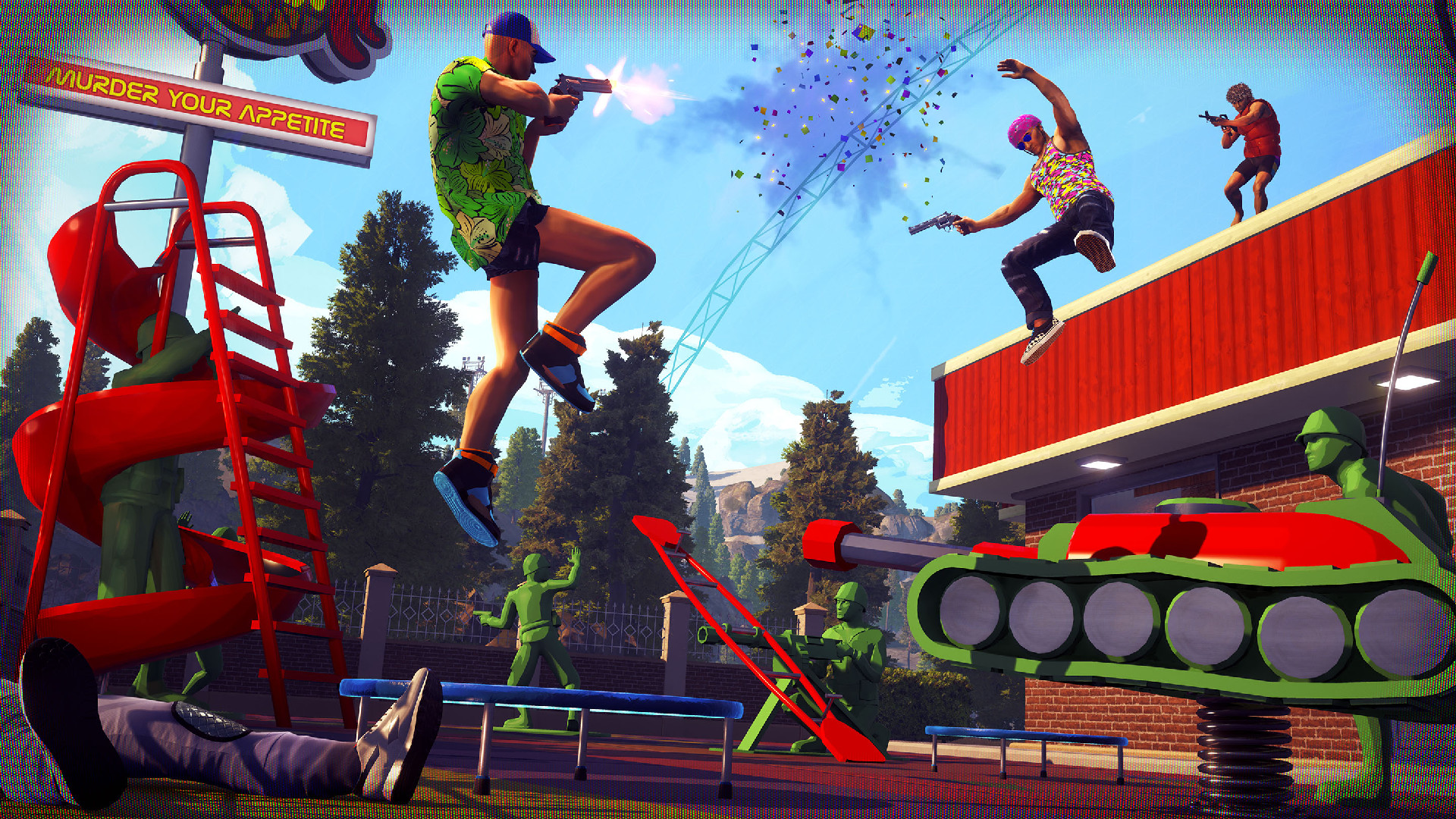 Let it be known that Radical Heightsis rough. It’s Early Access after all, but I’m talking unfinished-structure-models rough, like most of the game’s interior walls employ a monochromatic color scheme. You can get away with that in a battle royale jaunt though because of how simple the premise is, and once again you’ll be skydiving into an arena with 100 other people (in solo/duo/squad queues) and trying to survive until the end.

I see a lot of promise in Radical Heights, but once again, it’s early yet and a lot of work still needs to be done. The staging area that serves as the warm-up zone gives off the allure that Heights offers aStephen KingRunningMan-esque dystopian violent game show theme, but then you’re whisked away to skydive into a typical looking battle royale city. It’s a shame, as creating a vastly different landscape could have made it stand out — but right now the “Burger Commando” area looks just like Fornite‘s Tomato Town, and there’s several other appropriate amalgams. Aside from some technical glitches and poor optimization/early models, Heightsactually runs pretty smoothly as an online shooter.

For the most part the controls consist of your typical sprint/prone/crouch/jump shooter fare, with an option for dodge rolling and inventory management — it also has a cute dedicated dance button. Shooting actually feels tight, especially compared to other battle royale competitors, and I’d expect nothing less from Boss Key (even if rolling, the new bunny hopping, probably needs to be tweaked). So that’s the gist, but there are a few ways Radical Heightsveers off course, mostly in a good way.

For one, the cash withdraw and deposit system drastically changes game flow, as you can use money acquired in a particular match (or deposited across previous matches) to buy guns littered about vending machines in the arena. Despite the fact that some rich players are going to start with an advantage (that’s thankfully not linked to microtransactions), I actually dig the immediacy of the idea that one can loot a warehouse, deposit some cash, and start off the next match with a modest rifle instead of relying on RNG.

The death circle as it’s now known, the mechanic that slowly encloses the arena over time and forces people to fight under duress, is now a “grid.” Think of it like Tetrispieces of a sort, as red zones could form a windy path as they countdown and swap from safe to dangerous. The “Showcase” at the end of a match is also neat, as it puts a special focus on the final moments of a match by opening up the roof of the battle dome (an aesthetic they could really lean in on, going back to how familiar the map looks). So it has potential, if it survives. About that.

At the moment Radical Heights is free, but there’s also a Founder’s Pack up for 15 bucks. It comes with “20 pieces of exclusive cosmetics” and “1250 Rad Gems” (read: currency that converts to roughly $1 for 100 gems). Weirdly, it’s more aggressive than PUBGor Fortniteout of the gate (probably because it has to be), with a decent amount of gem items already available in the shop. They are cosmetic, mind, but there’s no real reward loop at the moment to keep me going.

The question is then, should you buy in? Maybe not right now, but give it a shot. Despite its promise, we really need to see where post-game support and server population is going to be in a few months. It’s a catch-22, right? If you don’t support the game with the Founder’s Pack we probably won’t see ongoing support? Ultimately you’re the one in charge of your wallet, but I’m cautious given how (the fantastic but unpopular) LawBreakersturned out.

[This review is based on a retail build of the free-to-play Early Access edition of the game.]