This entry is all about Katamari Damacy. Feel free to share some of your own favorite things about the game in the comments! 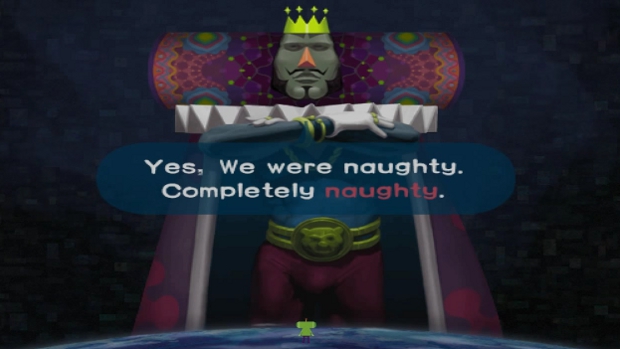 The King of All Cosmos might actually be my favorite video game character of all time. It’s weird though, because honestly, he’s kind of an asshole. He “accidentally” destroys all the stars in the galaxy, and then has the nerve to make his son do all the work creating new ones. He’s also incredibly snarky and super critical of the Prince’s work. Really, dad? You’re gonna force me to fix your mistakes and then tell me I’m not doing it well enough? I’m really feeling the love here…

But even after all the abuse, I just can’t help but admire the King of All Cosmos. I mean, just look at him! He’s fit, handsome, has a quirky fashion sense, well-groomed facial hair, and a shockingly noticeable bulge (oh myyy). And did I mention he literally vomits rainbows? He is the very definition of fabulous.

The King’s dialogue is one of the most entertaining aspects of Katamari. Hearing him put down the Prince in such a nonchalant way is pretty funny. Plus he’s got a witty sense of humor and a really strange way of viewing the world. It’s fun to see what he thinks of humans and their way of life as he tries to understand why they do the things they do. He talks a lot (and I mean a lot!), but I never got tired of hearing his weird and wonderful thoughts or the strange record-scratching sound he makes.

The King of All Cosmos may be a horrible father and a huge asshole, but he’s just such a lovable asshole. I mean, it’s hard to be mad at a man that has rainbows bursting out of every orifice!

It’s almost impossible to talk about Katamari and not mention the soundtrack. It’s one of the most unique video game soundtracks I’ve ever heard, filled with relentlessly happy songs and catchy melodies. If I ever want to smile, I simply have to put on some Katamari music. It cheers me up instantly.

The vocal tracks are the best. Some of my favorites from the first game include “Lonely Rolling Star,” “Katamaritaino,” “A Crimson Rose and a Gin Tonic,” and “Katamari Mambo” (I especially enjoy the male singer in that last one; he sounds so crazy!). Then there’s “Cherry Blossom Color Season” with some adorable child vocals, “Que Sera Sera” with its notable English vocals (“I want to wad you up into my life!”), and “Katamari on the Rocks” which gets stuck in my head for days whenever I play the game. And I can’t forget to mention “The Wonderful Star’s Walk is Wonderful,” which may not be a vocal track, but it’s my personal favorite. I could honestly gush about every song on the soundtrack; the whole thing is fantastic!

I had to give special mention to the title screen music, though. It’s the very first thing the player hears upon turning on the game, and it’s fantastic. It’s basically just a guy singing a simple melody, but it’s an instantly classic tune. It’s calming, cheerful, quirky, and immediately recognizable. All you have to do is sing the first two notes (“Na naaa…”) and it’s already in my head! 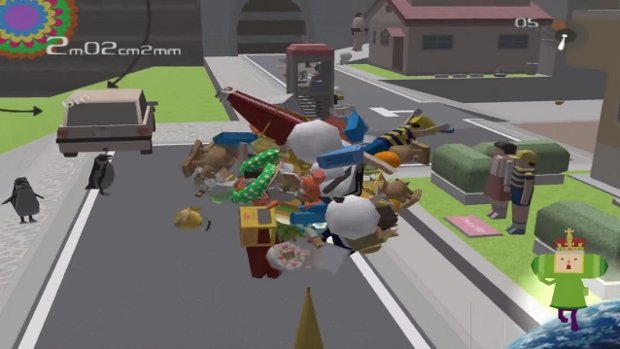 The basic premise of Katamari is to roll junk up into a ball. It’s a very simple idea, but it’s crazy just how fun it is. It starts the player off as a tiny little ball rolling up thumbtacks and candies, growing larger and picking up progressively bigger objects like trash cans and bicycles, and eventually becoming huge enough to roll up entire buildings and even the very island they’re standing on. It’s such a wonderful feeling to see the Katamari growing larger and more powerful by the second and rolling up everything in its way.

But I always find that the most fun comes from rolling up people. The behavior of the humans in Katamari games is hilarious. When the Katamari is still really small, they sort of just go about their business normally, most of the time not even giving a second glance to the weird ball of junk rolling around them. But once it’s big enough, people will notice it and run away in terror, flailing their arms wildly. Even when they get rolled up themselves, they keep flailing their arms and legs in a comically energetic manner, like insects that are stuck on their backs. They also make funny noises upon being picked up. Usually it’s a goofy shouting or laughing sound, but many of them make other strange noises. The biker punks’ cries are especially odd. This video has a good sampling of the many sounds the people make.

It may seem cruel to enjoy rolling people up into a ball of random objects, potentially crushing them as things like cars and buildings are added into the mix, or impaling them on fence posts and street signs, or burning them on campfires, or drowning them as the Katamari rolls through the ocean. And all the while they await their fate of being turned into a flaming hot star in a newly reformed galaxy. But, you know, they’ll probably be okay… right? I hope? I’m sure they’re fine… 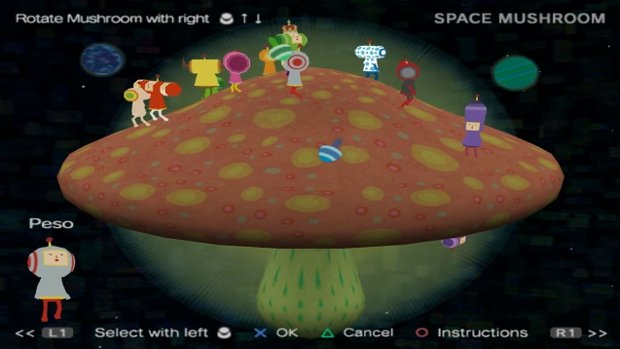 The Prince’s many cousins are a bizarre bunch of individuals. They can be found hidden in each level, and can later be selected for use in the multiplayer mini-game. Over the course of the series, more and more cousins were added to the mix, and they became playable characters for the main game as well.

Even though they’re essentially just costume swaps of the Prince (they don’t have special abilities or anything), I just love collecting all the little guys. Whenever I find a cousin as I’m rolling around one of the levels, I absolutely have to roll them up. If they’re too big, I make it my goal to grow large enough to grab them before the timer runs out.

The cousins also have some of the craziest designs in the game. They’re all very colorful with differently-shaped heads. There’s Ichigo who looks like a strawberry, Marny who’s shaped like a tennis ball, Nickel who’s a robot, Lalala who is always naked, Miso who literally has a bowl of soup for a head (filled with actual soup in later games), and many more.

My two favorite cousins are Dipp and Odeko. Dipp’s body is covered with brightly-colored, flashing polka dots so he looks like a disco ball or something, and Odeko has an unreasonably tall head which grows taller in the later games and makes certain items like the headphones look really funny. I almost always play as those two.

Throughout the Katamari series, the cousins seem to get weirder and weirder. The original 23 from the first game have all had their features altered and intensified, while newer, crazier cousins are introduced as well. I really like them though. They’re like a strange, dysfunctional, rainbow-colored family. I bet they have the greatest reunions! 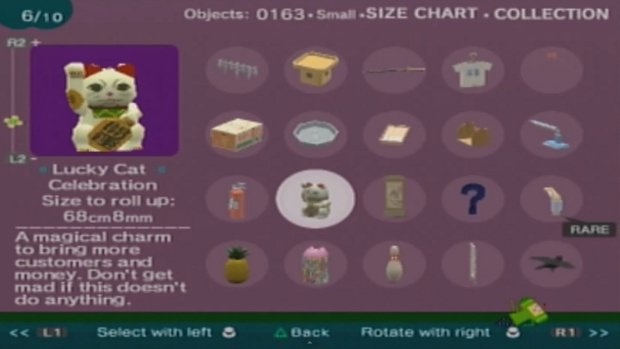 Must find all of the things!

Katamari Damacy is one of those games where I have to collect everything. I feel like I haven’t truly finished the game until I’ve rolled up every last object I can find. This mentality is mainly due to the very detailed collection screen, which lists every object by category, location, and size, as well as a separate list for rare objects with special names. Each list provides a percentage of items that have been collected, which of course made the completionist gamer in me want to fill out each list for 100% completion.

Katamari also took one step further with its collection screen by adding funny little descriptions for each object in the game. The descriptions appear to be written from the perspective of the King of All Cosmos, since they often use the royal We, which the King enjoys using to refer to himself. Since the majority of the objects are human items, the King sort of has to guess at what they’re used for through observation, so a lot of the descriptions are humorous.

Some of my favorite descriptions include the peach (“A butt-shaped fruit that is more tasty than butts.”), the chopsticks (“Why are these called chopsticks? And why are they so difficult to use?”), the toothbrush (“A stick to put in your mouth. There’s got to be a purpose…”), the nail clipper (“Used to clip human claws. We wonder if it hurts.”), the handcuffs (“If you do something really bad these may be used on you! Or if you are good…”), and the dung beetle (“Rolls cow dung and makes it bigger. We feel a little rivalry here.”).

The collection screens are always a joy to read through. Every time I find new items, I go directly to the collection to read what the King has to say about it. In fact, there’s actually aTwitter account specifically dedicated to cataloging every single Katamari item with their descriptions! 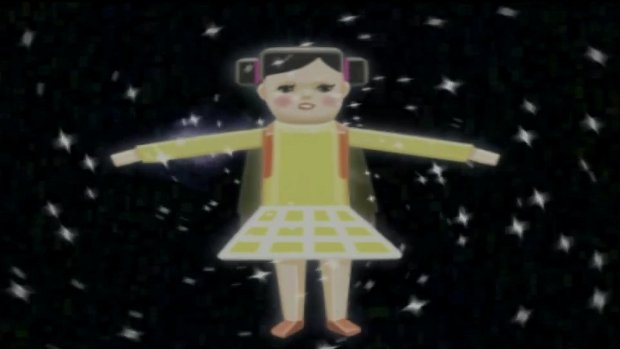 And now for something completely different

It’s not often I praise a game for its cutscenes, but Katamari‘s cutscenes are simply glorious. The game’s intro is just about the happiest, craziest thing I’ve ever watched, and it sets the mood perfectly. It has rainbows bursting everywhere, animals dancing and singing, the King flying around and looking all regal, the Prince doing a happy little dance, and really catchy, upbeat music. It might just be my favorite opening scene of all time, simply because of how wacky and cheerful it is. Those ducks get me every time!

And then there are the other cutscenes which focus on the human Hoshino family as they live their daily lives while Katamari are being rolled in the background. These scenes are particularly awkward. The Hoshinos are all square and boxy, move very slowly, and speak in slow, unenthusiastic voices, but something about their boring demeanor clashes with the wackiness of the game in a hilarious way. The cutscenes always had me laughing in a “what did I just watch?” kind of way, and I kept looking forward to seeing more of them.

Oh, and the little girl also has her own cutscenes after each constellation level is completed. She gets a peculiar sensation and proclaims, “Oh! I feel it. I feel the cosmos!” before swirling out of control into the cosmos herself. I love those scenes so much.