Exploring the depths of the ocean in Assassin's Creed IV

Getting technical with underwater gameplay

Water is usually a background element in action/adventure games. Or at best, water gets a temporary spotlight in levels that let you take a break from standard play — a quick splash and then back to land. It’s rarely ever a focus in these games. Usually, underwater segments are the worst parts of these games. Poor water.

The ocean played a sizable role in Assassin’s Creed III with its naval battles, and while that was fantastic, it only served as a tease for what the ocean offered. Reacting to feedback, Ubisoft is now bringing the deep blue sea to the forefront in Assassin’s Creed IV: Black Flag. They’ve embraced the open-world concept, and the free exploration extends to the ocean, not only by boat, but through underwater play.

We visited the team behind Assassin’s Creed IV‘s ocean tech, Ubisoft Singapore, to learn how deep they were willing to dive this time around. 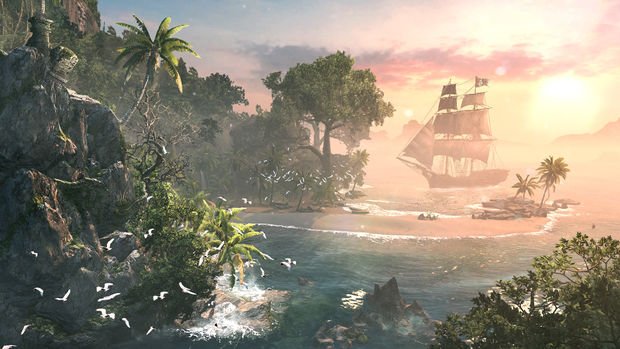 The naval battles return in a big way, but to really explore the ocean means jumping in. For the first time in Assassin’s Creed IV you can access the ocean from anywhere in the game’s world; you’re immediately in, with no loading or transitions.

But, before jumping in, stop and enjoy the beauty of the ocean. No — really look at it. Ubisoft Singapore put a lot of work into making the ocean as realistic as possible. They traveled to the Caribbean for research in order to nail the look, and put their research into even the smallest details, like new tech for the look of the sand and sunlight. They even have simulations for sea foam, with controls that can vary how it’ll look when it washes up on sand or pools around rocks. They’re not messing around when it comes to realism

The water’s surface in ACIV on next-gen consoles is stunning. It shimmers in the sunlight in a way that makes you want to take a snapshot. All of their technical work combines to make for some postcard worthy imagery.

ACIV‘s engine is doing crazy work under the hood to make the waves look realistic, and that kicks into overdrive when simulating what happens when objects like ships move through it. We saw examples of how the engine scales from calm waters to massive storms realistically — impressive stuff. Ubisoft Singapore says that you can expect the water to look very good on current-gen consoles, but some water appearance features are only available on next-gen systems. 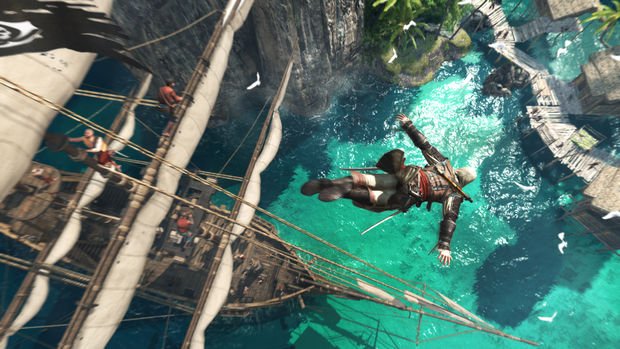 Ubisoft Singapore Senior Technical Director, Georges Torres, told us that they saw next-gen as an opportunity to do what they wanted with water in ACIII but didn’t have the resources for. If you’re looking for technical specifics of what you’d see in the next-gen over current generation versions, Torres says adaptive tessellation tech is the major thing. Expect more detailed waves — a third frequency of wave is possible with next-gen consoles, over the two of ACIII. Also, the way the water interacts with objects in it will look better. For example, objects that fall into water will appropriately displace water. On the rendering side, there’s much more detail to see with the new consoles’ versions.

Underwater is equally as lovely. Ubisoft Singapore has done a fine job in creating an underwater world you’ll want to explore. Swim to whatever catches your fancy, enjoying the sea life that glitters among the almost glowing coral reef. You might see a treasure chest in the distance, but keep in mind your oxygen limitation. Oh, and sharks. While you can harpoon sharks from a boat, you’re totally helpless underwater.

The running and climbing gameplay we’ve come to expect from the franchise can’t take place underwater, Ubisoft Singapore has worked in some similar elements for underwater navigation. Players can swim wherever they’d like, and once they get going they can pull on fixed objects to propel them forward as sort of a speed boost. It’s not just flat swimming — there’s pushing and pulling on objects, escaping sea creatures, getting caught in water currents and more.

There’s some motivation for diving beyond just sightseeing. Of course, just as in pirate days, there’s treasure and money to be found. Also, blueprints can be retrieved from underwater to improve your ship.

There was no capability for this underwater exploration in the existing game engine, so Ubisoft Singapore was tasked with creating it. Torres told us that it was from scratch. He said that they altered the perspective over the last game so that the player could see water, jump in it, explore it, and swim out of it back onto land seamlessly.

Torres said that unifying these aspects of play wasn’t easy. Moving from the ocean inland, a lot of loading needs to happen in the background for a seamless setting transition to happen for the player, and that’s not to mention the animation sets that have to change the character itself. He said it looks natural, and seems simple, but in reality some very complex stuff goes on under the hood to make it all work. From what we saw of live gameplay at the studio, seeing it in action looks perfect, so here’s a tip of our pirate hat to the team. 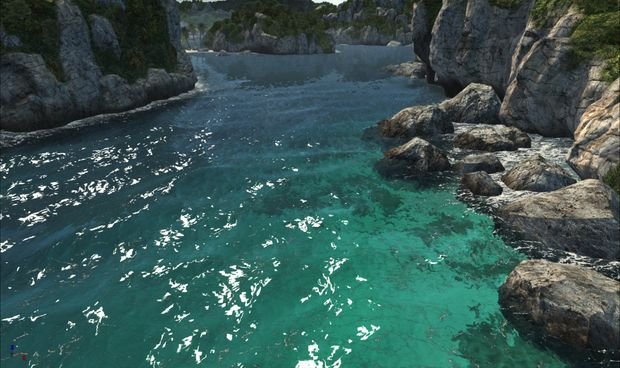 But it’s not just graphics and animation at work here. Torres told us that they’ve developed a full series of technologies to make the underwater experience as immersive and realistic as possible. The Singapore team built tech for the visuals, coloring, particle effects, ecosystem, animations, underwater audio, underwater behaviors, swimming simulations and much more. Even the way the light filters through water to create a sense of depth was a focus for them.

The takeaway here is that Ubisoft Singapore put a lot of hard work to draw players into the deep. Full teams were tasked with making the underwater experience as realistic and immersive as possible. Maybe Assassin’s Creed IV open-world underwater exploration will make up for all of the crappy underwater levels we’ve had to put up with over the years.