Standalone multiplayer release for Company of Heroes 2, The Western Front Armies, can serve as a gateway, bringing players over to the full Company of Heroes 2 experience. Its pricing is low enough ($12.99 for one army, or $19.99 for both) that even the curious can jump in and try their hand at WWII strategy from either the U.S. or German Oberkommando West viewpoints.

I know that Company of Heroes 2 is a great game, but I haven’t given it the time its worth. But sitting down to play a bit of The Western Front Armies for our first hands-on report turned into an hour-long session that I had to break myself away from. Well, actually, the game did that for me.

I played as American forces, jumping into an already established battle where I only had to take a few bases to finish it off. But that never came together for me. I’ll blame the ultra-realistic setting and sound for my failures — they’re intense!

I struggled with advancing through dense woodlands. Even with taking care to use COH2‘s cover system and slowly pushing back the fog of war, I kept walking into trouble, finding myself surrounded by squads in hiding. Worse were the tanks, taking my groups out before they knew what was happening to them. 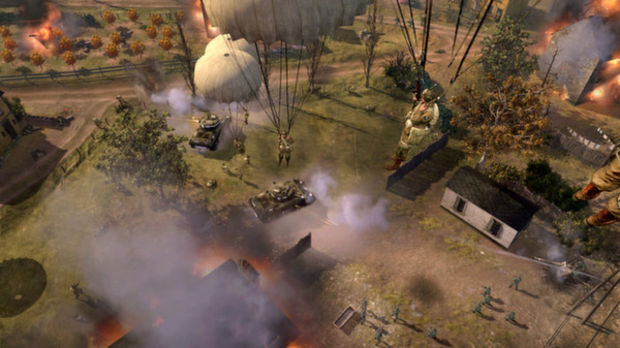 Long story short, I regrouped many times and did my best to try to rally, but I eventually exhausted my resources and was utterly defeated. My situation was so desperate that even Relic staff were watching on and offering advice to try to help me out of a string of bad situations.

I love that there’s a game feature that lets you continue on after you’ve lost in a sort of just-for-fun second chance. But even getting back in through this feature didn’t help — I died again, this time for good.

I’ll get them next time, Gadget. For $20, why not? The two new collections of content include their own eight maps, new weapons, vehicles, and options, and all of the maps of the original game are also fully available. Again, this is a very easy way to get into the popular RTS. Even if you don’t have friends that play COH2, you can be insta-paired with other players to make new ones.