Geometry Wars 3 may look different, but it feels right

There was some initial skepticism when it came to Geometry Wars 3: Dimensions and its so-called “3D action.” For starters, it’s been several years since the last games entered our lives to rekindle old leaderboard feuds. There was also confusion surrounding developer Lucid Games who, as it turns out, is made up of former Bizarre Creations staff.

Even if I hadn’t known that fact going in, I like to think I would’ve picked up on it instinctively during a hands-on session at PAX Prime. Despite a few significant changes such as the shift from a flat playing field to planet-like 3D stages, Dimensions unmistakably feels like Geometry Wars. 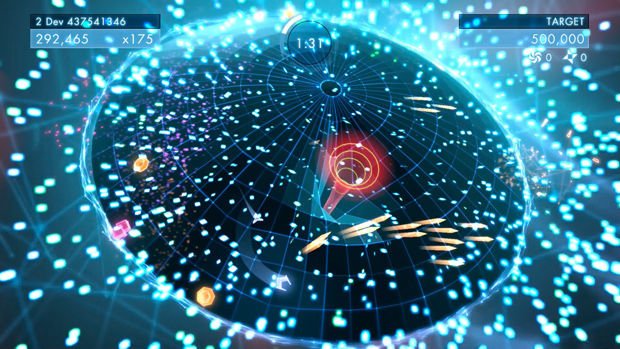 For my appointment, I was free to play whichever single-player levels I wanted and much as I would’ve liked to try them all, I attempted to get a good feel for the variety.

Some levels are reminiscent of past games in that the playing field is (more or less) flat, while others used Pacifism as a foundation. Even then, there’s further variety — one Pacifism level had no enemies and required me to fly through as many “gates” as possible in a time limit, while another was more traditional with enemies chasing my gun-less vessel.

Shooting and movement feels great, as expected. Your past Geometry Wars skills will directly translate to Dimensions, though it will take time to acquaint yourself with the new level designs. You’re free to move across the 3D environments at will, but so are enemies. Lot to keep track of. Stages themselves can also have moving walls, which was interesting. These are great at blocking foes from reaching you, but can also trap you in a crowded corner.

Thankfully, you still have bombs, and there are drones to help out too. You select yours before starting a stage and equip it with a power — one could drop a black hole, while another placed proximity mines (that I could fly over, free of harm). Helpful but, again, there’s lots happening on-screen and it can take a while to adjust to what is and isn’t dangerous. 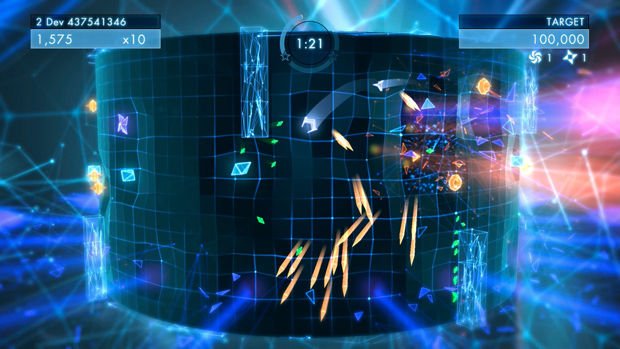 You can earn up to three stars in a level based on how high of score you attain, but only a single star is needed to unlock the next stage — unless it’s a boss fight, in which case there will be a set amount of stars needed to unlock it. Bosses, at least the two I tried, seemed right at home in Geometry Wars. It was like playing any other level, except there was this Big Thing I had to shoot at when its shield went down. Still plenty of other stuff to dodge in the mean time.

When choosing levels from a grid-like world map of sorts, you’re told which game type they represent and if a friend tops your high score, you’ll see that level glow. I stopped the person giving me my demo to thank them for that feature. So crucial.

Unfortunately, I wasn’t able to try out any of the cooperative or head-to-head multiplayer offerings, but I’m expecting similarly good things out of those.

If you enjoy the series on the whole, you’ll dig Dimensions — or parts of it, at the very least. It wasn’t until the end of my appointment that I began getting into a groove and at that point, I just didn’t want to put the controller down. Sorry about the wait, Patrick Klepek.