Getting spooked in Daylight while wearing an Oculus Rift

The Oculus Rift is really daylight-ful

Sensory deprivation can be relaxing. It can also be terrifying in extreme measures, like the sound proof acoustic chamber that causes its guests to hallucinate. Wearing an Oculus Rift is a little bit like that. Especially in a first-person game like the upcoming PC and PS4 spook tale Daylight.

I put the Rift goggles over my eyes and I could see, but I couldn’t see. It didn’t dawn on my at first, because I was ostensibly looking at something, through Daylight’s first-person surrogate. Then a big pair of headphones was draped over my head and the chipper daytime noise and electronic pop music from the other room was drowned out by sounds pulling me into this ghost tale. 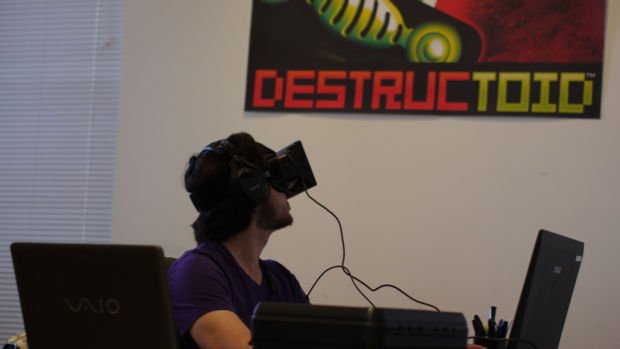 I looked down, towards my lap, and I saw hands, but they were not mine. It’s like a weird, inverse phantom limb syndrome.

Atlus USA’s John Hardin picked up my left hand and placed it on the keyboard, my middle finger resting on “W.” He took my right hand and put it on the mouse. I was now in a terrible place.

The small team at Zombie Studios working on Daylight had only been playing with Occulus Rift technology for the last three weeks. The environment I was put in to test it out was pre-determined, rather than following the game’s procedurally generated haunted house. It already worked quite well, though, and was incredibly efficient at adding to immersion as I craned my neck to look around corners, looked down at the strange hands that were not mine, and shot glances back and forth every time I heard a scary noise.

Check out my non-Occulus Rift preview of Daylight for a lengthier look at the game. It scared the sh*t out of me, I’m mildly embarrassed to admit. When I started playing without the Rift, I thought something was missing. I felt more confident, less vulnerable. “I can totally do this,” I thought. Nope. Things spiraled out of control quickly and I cursed Hamza for making me play this spooky god damn game.