When tactical-RPG Fire Emblem Heroes first launched in February of this year, it made almost three million dollars in revenue on its first day. Since then, the spin-off title has gone from strength-to-strength, raking in a cool 270 million dollars to date. 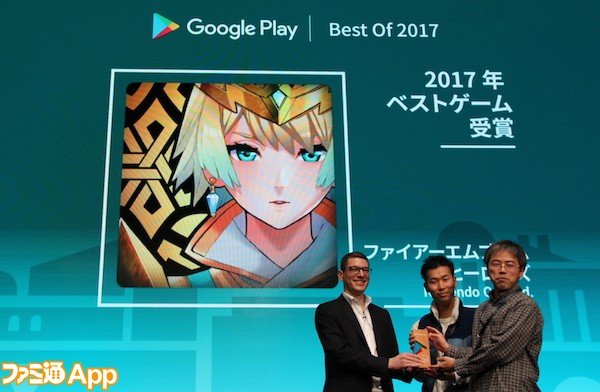 Famitsu App were in attendance to briefly interview game directors Kouhei Maeda and Shingo Matsushita, who were understandably very proud and pleased with the game’s performance to date. The interview was since translated by Reddit user drnged.

Q: What issues did you encounter when creating a mobile game?

Maeda: It has to be how the game is never-ending, unlike a typical consumer game. We had to come up with new content constantly, and none of us were used to such a process, so it ended up being quite a big problem.

Q: What do you think were the main factors in Fire Emblem Heroes winning this award?

Matsushita: I’m still in a state of shock, so my honest answer would be “I don’t know.” But I do believe one of the key factors was our receptiveness to playerbase, and incorporating their views by making appropriate changes to the game. We want to keep answering the expectations of our fans, so we’ll continue to make sure we keep a finger on the community’s pulse. Even if that’s the only thing we get credit for, that’d be good enough for me.

Q: Would receiving this award give you more confidence to develop more mobile games?

Matsushita: We’re at least more confident now than we were before, but we’re still taking baby steps. There’s still a lot to learn about developing phone games, so I can’t say we’re fully confident in ourselves yet. (wry smile)

Maeda: For consumer games, once it’s released, there’s usually a period of calm. Even the general reception to the game usually takes some time to eventually form. For phone games, any new content you release usually gets feedback within the same day. I believe this to be the biggest difference between the two types of games.

Matsushita: I hope to do my best to keep our playerbase supporting us!

Maeda: Phone games have the advantage of being accessible to people all over the world. I hope we will be doing our best to keep our fans worldwide in love with our game.

Q: Receiving this award may well encourage more people to start playing Fire Emblem Heroes. Would you like to leave a message for them?

Matsushita: Start playing from the second arc, please! (laughs) You’ll get a really strong character after finishing it, which I believe would help you enjoy the game even more. We’ll be making more adjustments to help new players enjoy the game, so please look forward to it.