H1Z1 is a lot more playable, still a ways out

I stopped tallying at ten counts of the word “iteration” in the early goings of the SOE Live 2014 presentation for SOE’s upcoming (PC, PS4) survival zombie sim H1Z1. Okay. I get it. That’s why the game wasn’t so hot when it was first shown off and why there’s still work to do before it comes to Steam Early Access “soon.”

“It kicked us in the butt,” I was told of initial previews, which were not all that kind to the project (our own Wett Brett Makedonski called it “almost unplayable“). 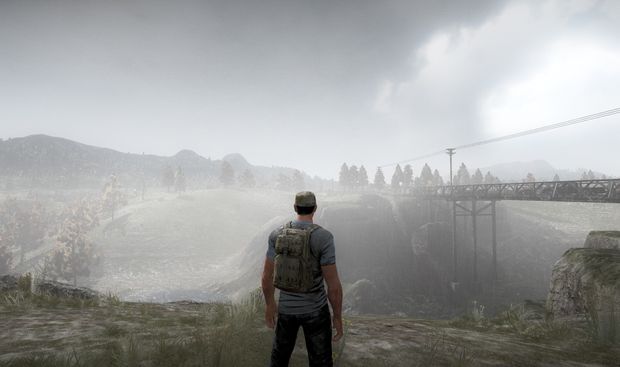 But “iteration” is one of the (appropriate enough) buzzwords floating around H1Z1. The team wants to “treat it like an indie project,” with open development. So it’s all going to be iteration, tweaking, tuning. And this needs to be based on feedback (and backed up by data) — it “requires a lot of people to help [them] test it.”

What’s the right amount of players per server? Can players get permanent locks for their abodes, or is everything raidable with enough brute force? What’s the active cap for sniper rifles on a single server? That’s why it will hit Early Access, why it’s been shown so early, versus a traditional, years behind closed doors cycle.

Maybe releasing during the open-world survival zeitgeist was important, too, rather than showing up late as an also-ran.

A lot of people don’t mind that much, if both Rust and DayZ‘s millions of sales are any indication. DayZ, incidentally, just got announced for PS4, but the team doesn’t see it as too much competition, especially since they’ll have an easier time getting onto PS4 because H1Z1 is based on existing PlanetSide 2 tech.

H1Z1 isn’t on Early Access yet because it doesn’t have a base level of doneness that the team is happy with, which kind of explains the best reason to choose H1Z1 over its ilk. It has a much less obtuse UI and controls than closest competitor DayZ. What you’re going to get is likely something more polished, more complete, and a bit easier to just play it.

Otherwise, you’re getting a similar open-world zombie survival game, conceptually. It already plays a lot smoother than when Wett Brett checked it out. Its world is also filthy with deer. Like, in herds of 12 plus at times. They’re everywhere. And recipes, which, once unlocked, are basically all you’ll hang onto after death, there’s a recipe that involves mixing a deer’s gallbladder with cloth to give you deer scent. This makes it easier to go up and kill them without needing to craft a bow.

It will probably be useful when there aren’t so many deer. There are also horrible bears and wolves running about at the moment that are much more dangerous than zombies, perhaps less dangerous than other players. I quite like the game at night, illuminated only by a full moon and a flashlight. The team also showed off one new idea during the panel, Air Supply Drops. You’ll see trunks obviously parachuting in from the sky, and you’ll have to make a mad scramble to get to it before anyone else in your game (or, maybe, team up with some people to get there first, then kill your darlings).

An Early Access version of H1Z1 is bound to have some technical problems, but it should generally be smoother than its contemporaries, if you want to finally test the genre.