If Die Hard is a Christmas movie, Doom is my favorite Christmas game

In Doomguy we trust

The holiday season is upon us, friends. That means me drinking my weight in crappy eggnog-flavored coffee. It means rushing around to buy dumb junk for my kids that they will be less interested in than the box it came in. And of course, most importantly, it is about having to hear from the “funny guy” at the office about how “Die Hard is actually a Christmas movie” as he grins smugly and leans on the water cooler while you secretly hope that his arm slips and he cracks his head on the wall right before also going on to explain how Gremlins is also a Christmas movie.

And yeah, I know, he ain’t wrong. I love Die Hard. And I can’t sit here and criticize his assertion when mine is even more ridiculous, awesome, and uses exactly the same logic. For many people, Christmas is now a cultural thing, all about Santas and presents and roasted chestnuts or whatever. But in our house, it’s about a man. A man some people have forgotten. Oh, you might have heard of him. He is pretty popular in some circles this time of year. His name is Jesus Christ. He’s no big deal though…he only died for all of your worthless souls. 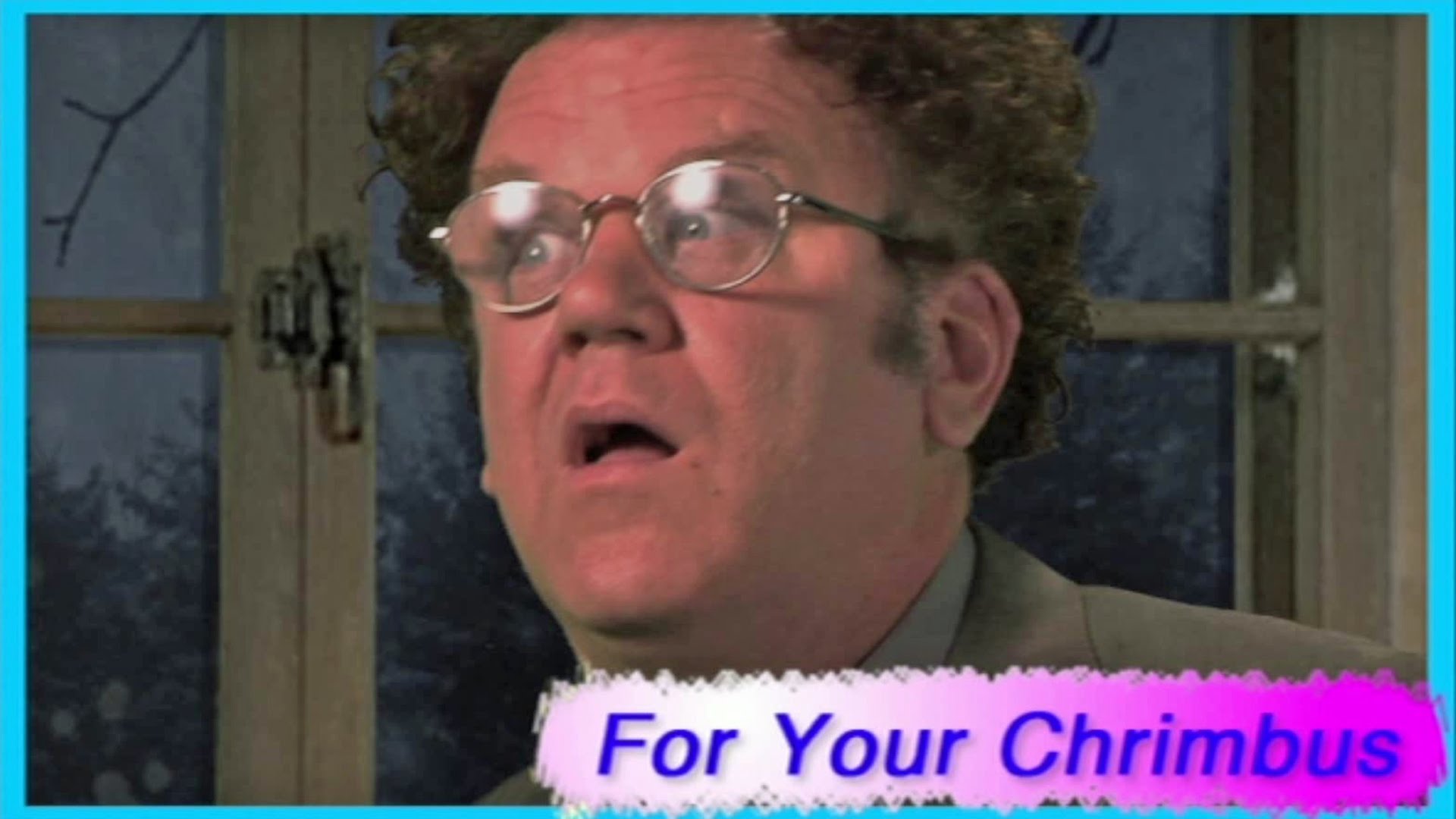 But I get it, some people have different beliefs. As an old grumpy Canadian man who spends most of his time in a basement, I can only guess at what those might be. I guess…some kind of space dog, or Zeus or something. Whatever. But I wasn’t always this way either. So I can empathize if people don’t see eye to eye on this. But I am all about togetherness. I want unity among men, and for the schism between us to heal. So whether you are Jewish, Muslim, Christian, or some kind of weirdo guy who thinks aliens created the Earth like in that Prometheus movie or whatever, I think I have have found a way for us to all come together – something that we can hate together, as a team. Because nothing brings people together like hatred.

This Christmas season, if you are not going to celebrate advent, or reflect on the perfect man who was also a God or…something, and came to save the Earth 2000 years ago, I want you to at least remember another man. A man who also saved the Earth. A man who hates demons so much, as should we all, that he literally tears them limb from limb. A man who has more guns in his backpack than limbs.

His name is the Doomslayer. But I still remember him as the Doomguy. 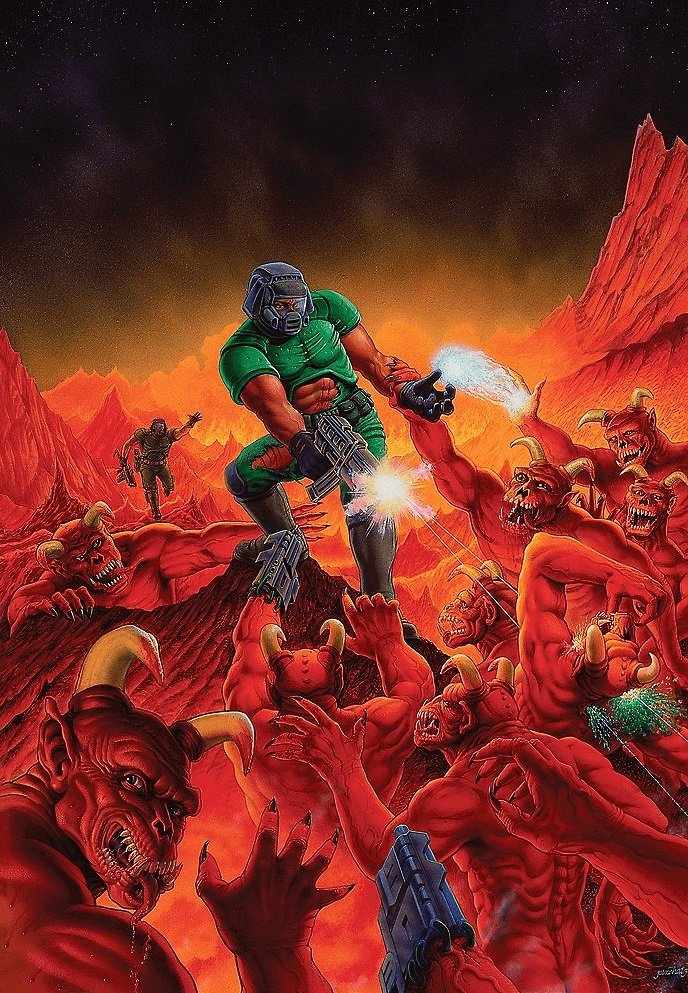 Seriously, is there a more Christian game than Doom?Don’t answer that, it’s rhetorical, and the rest of the article won’t work if you say yes. Old Doom, new Doom, you take your bloody pick, but the premise is the same either way. You are a space marine in a base that has been taken over by demons. You need to kill all of the demons. And then you need to go to Hell and kill even more of them. And then you need to go to Earth and kill what is basically Satan himself, even though it’s actually John Romero’s head hidden behind a wall.

Speaking of, I was reminded of Doom recently (yeah right, as if I ever have to be reminded of Doom) when Sigil, the new 18-level megawad for Doom by the man Romero himself was put up for pre-order on Limited Run (ending December 24!). It comes in two versions, each with an amazing box, even more amazing soundtrack, and some truly creepy art I am not even sure I am fully comfortable with – but damn, does it ever get the point across. So thanks John, I look forward to playing with your wad. Heh. 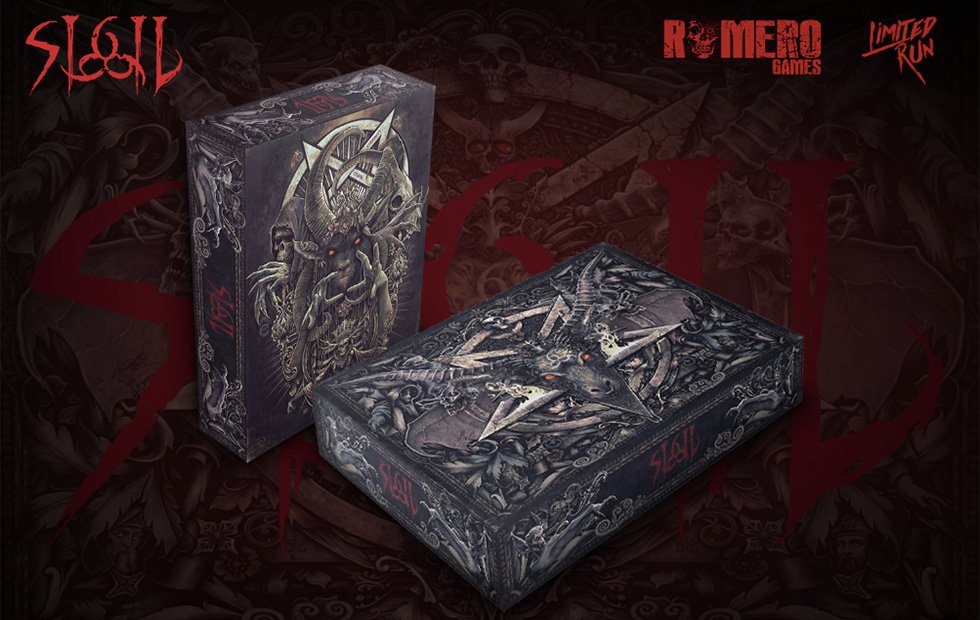 The point I am trying to make is that the Doomguy himself is relentless. He doesn’t care about plot. He doesn’t care about consequence. He only cares about one thing: destroying evil. Every last miserable bit of it. The old game gave you a percentage of how many demons you had killed at the end of each level. As if to say, “What’s the matter? Only 99 percent? Not good enough. You need to kill every. Last. One.” And the new Doom strongly inferred through the Doomslayer’s emotive nature that he was interested in exactly the same.

Christians often get a bad rap for being judgmental, hypocritical, overly zealous a-holes, and I have met a few. I also know more than a handful of amazing, wonderful, charitable ones. Just this last month, our congregation got together knowing we were struggling a bit thanks to me being in school, and collected a bunch of gift cards to help us through the season. Amazing. But the Christians who impress me the most are the Doomguy incarnate. The ones whose only focus is their own sin, the demons inside of themselves. The ones who never judge anyone. The ones whose only motive, far removed from the bigotry and bad behavior of some, is to clean themselves up, to follow what is good, to kill the old Adam inside of them. It’s basically an impossible, lifelong task for these serious, devoted folks. Just like killing demons is for the Doomguy. 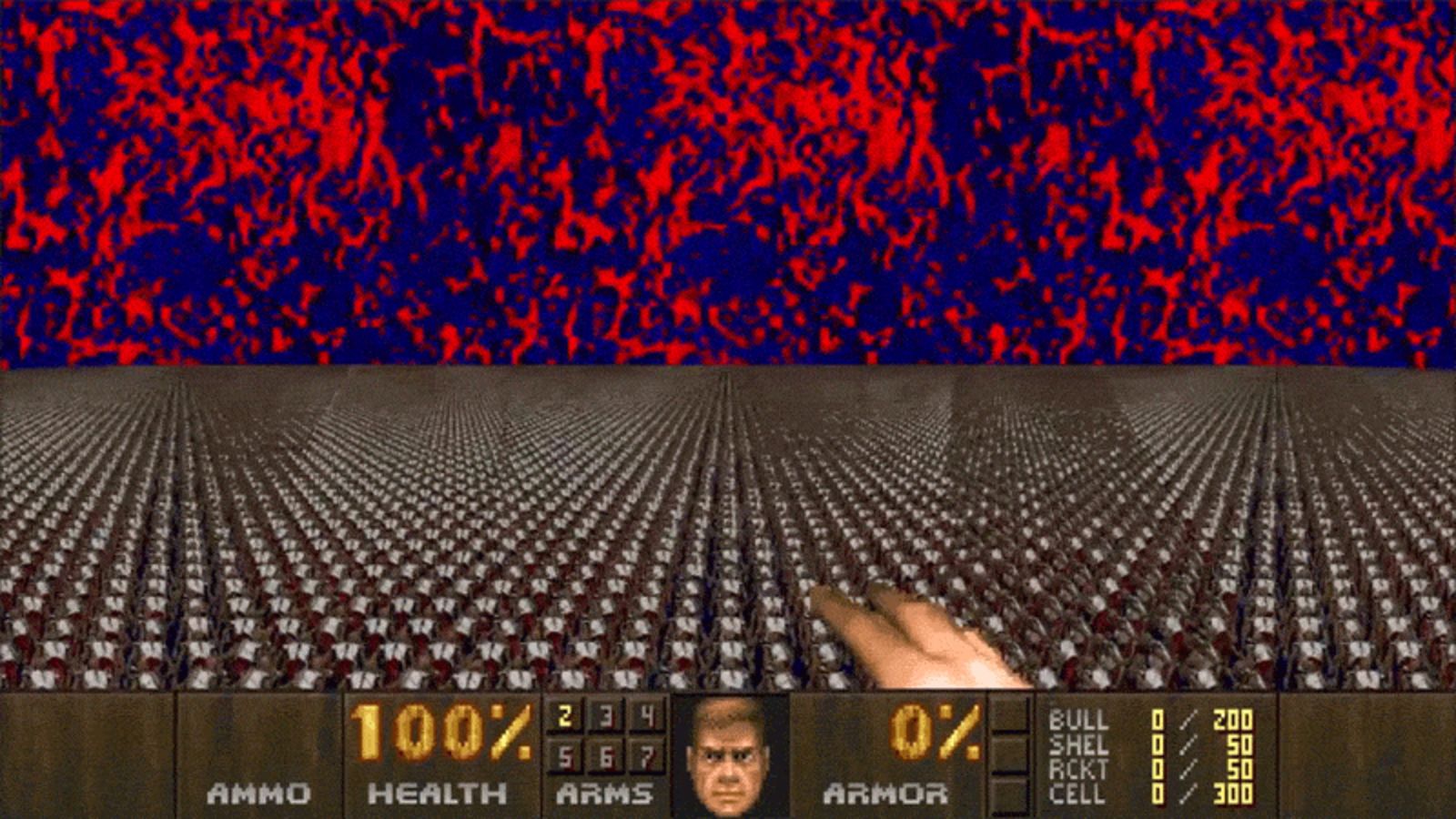 I mean, look at how many demons there are. If I had a complaint about the new Doom at all (and I don’t) it’s that the swarms I was used to mowing down in the old game are not quite the same. Check out some of the best mods for Doom, and you will usually run into a handful of stages that send an overwhelming army at you. But no problem: pop out the BFG, clear them out in a couple rounds, and mosey on to the next level, only to do it all over again.

And like how Christians can never be free of sin, we are never free of new Doom levels to play. Just this week I sat down with Brutal Doom 64, a mind-blowing source port of Doom 64 for the Nintendo 64 but with new enemies, new weapons and animations, and about a million gallons more blood and gore than the original. I actually don’t love violence in games, to be honest. Human-on-human violence really disturbs me these days. But these are demons. I don’t wanna hear about any of this deconstruction crap that says “maybe the demons are the real good guys.” No. Blow it out your ass with a double-barreled sawed-off shotgun. 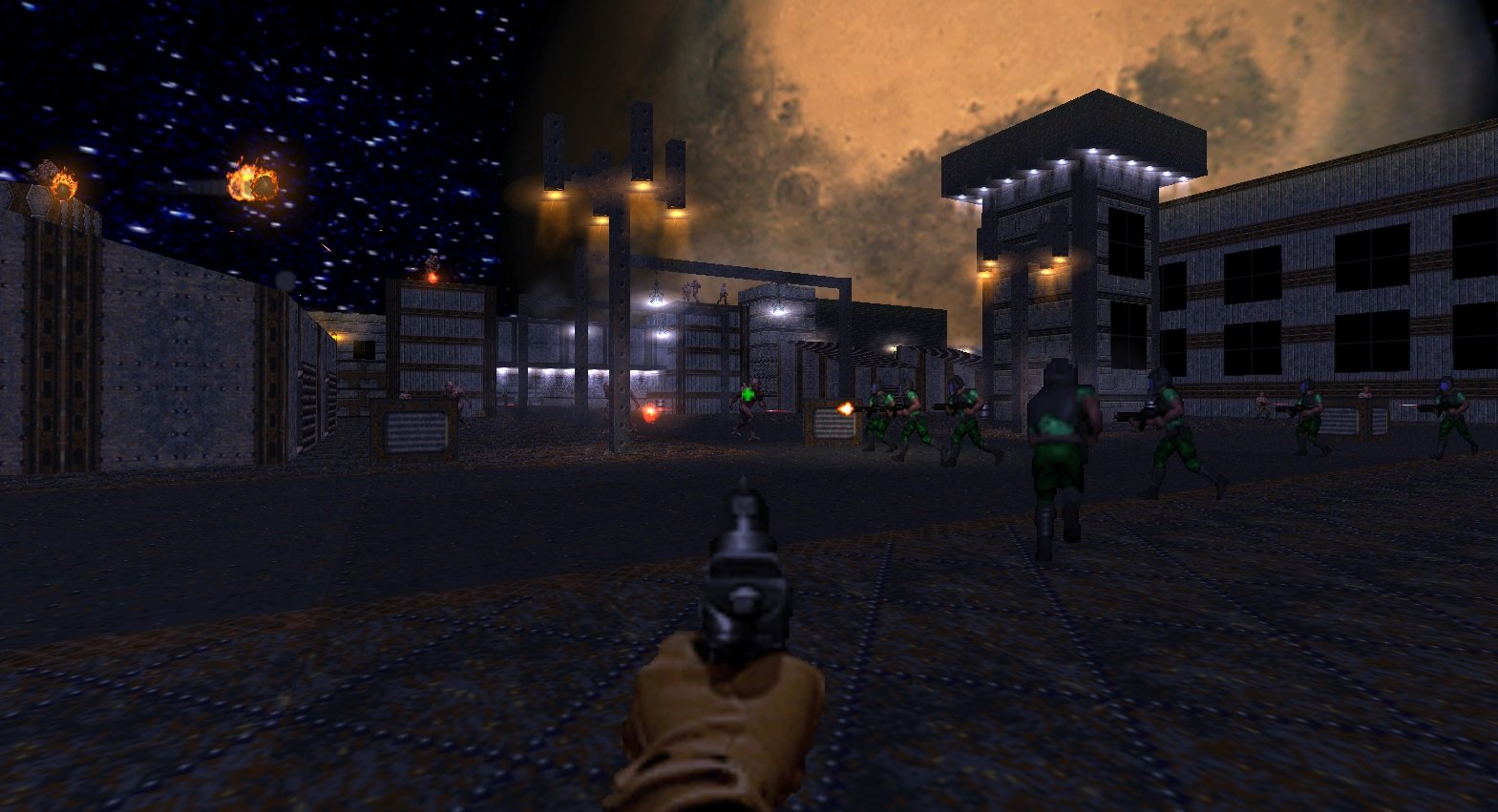 I believe there is real evil in the world. And I also believe that it is sometimes overwhelming for us as individuals. So that’s why my family and I go to church every Sunday. It’s also why my cousin and I spent all last night beating Doom in co-op mode online in Doom Classic Complete on the PlayStation 3.

That’s another thing: the old Doom practically pioneered Deathmatch, but you could also play through every level in co-op. But what a pain in the ass it is to do that on the PC today. If I could wish for one Christmas miracle, it would be for Bethesda to get off their arses and do a really nice, proper Doom package for the PC, similar to the Duke Nukem Megaton Edition.

I messed around with Zandronum, a Doom source port focusing on multiplayer, for two hours yesterday. I forwarded all my ports properly, and more than likely created huge security gaps in my network. And for the bloody life of me, I could not get a proper game hosted, which prompted me to dust off my old dirty dog PS3 and hook it up. Some connection woes were present, it worked alright, and it was as fun as ever, but man it would be better if there was a recent console release of the old Doom games, and a better way to do things on PC. Please make it happen, dudes. 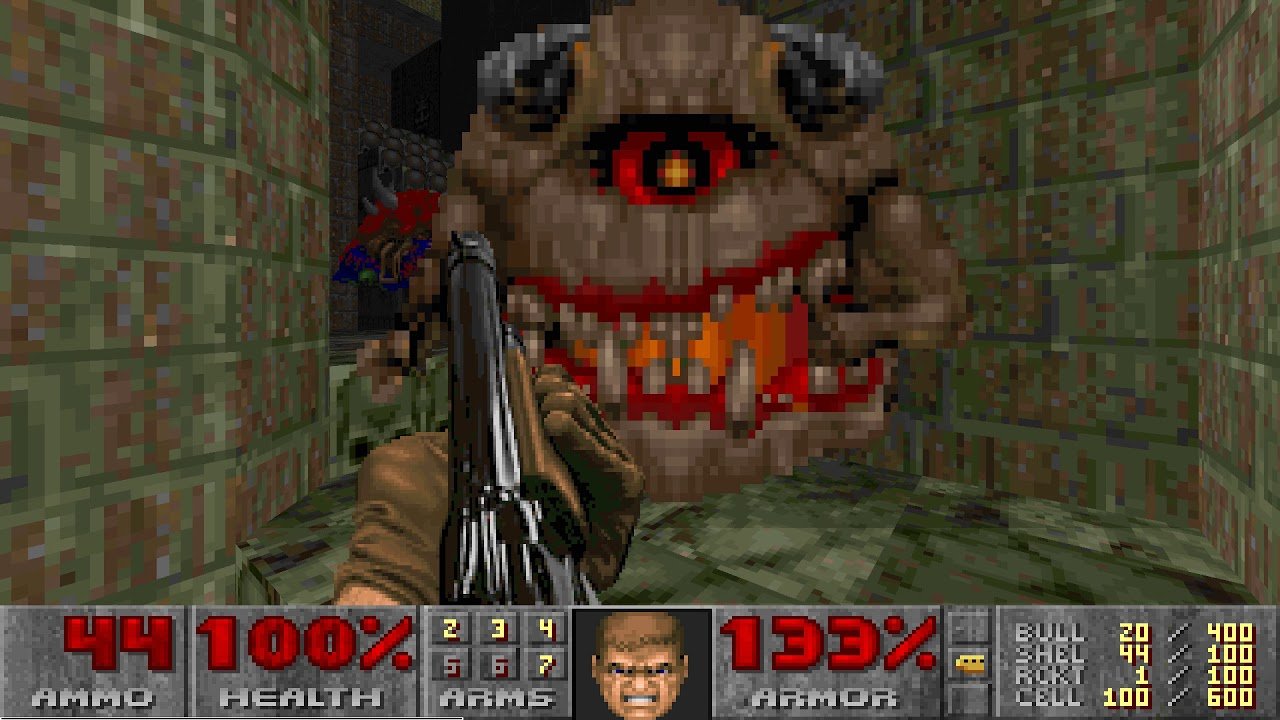 There is nothing more Christmas than Christianity. And so in my mind, if everyone’s favorite Christmas movie is Die Hard, by the power invested in me as a fat man who writes things on the internet sometimes, I hereby declare Doom to be the greatest Christmas game ever made from thenceforth, unto the ages of ages. I hope you guys all get to enjoy the joy, love, and togetherness that the season brings, and slaughter demons together with your loved ones.

I mean, being honest, this is the season of depression, separation, loneliness, and conflict for a lot of people, but let’s all just pretend for a second that it’s as simple as a lone space marine, his chainsaw, and a roomful of Cacodemons. If only the rest of life were that wonderfully straightforward.

I’d like to end on an alteration of a classic Christmas song that you can sing to your family this Christmas Eve. Enjoy. 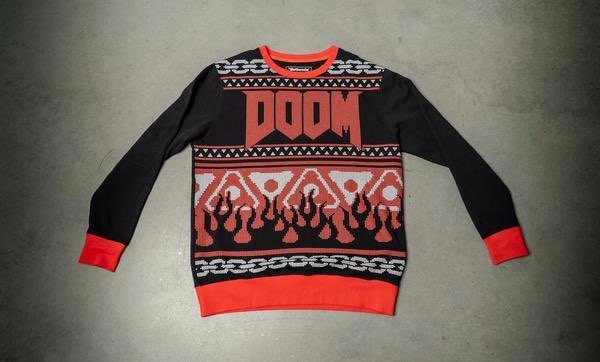 Share
Facebook
Twitter
Pinterest
WhatsApp
Previous articleIn this episode of Pregame Discharge, Devil May Cry 5 multiplayer and Spider-Man on PS4 is getting its final DLC!
Next articleDestructoid's award for Best Switch Game of 2018 goes to…