If you were hoping for Twisted Metal III to be mediocre, your wish is granted

Twisted Metalwas an institution on the PlayStation. Much like the landmark titlesTony Hawk’s Pro Skater and Resident Evil, it exploded its genre, resulting in a bevy of pretenders. For Twisted Metal, it was vehicular combat; average, everyday cars with guns taped to them battling it out for supremacy. Games like Interstate ‘76 and Carmageddon would step up to try and take the throne over the next decade.

It was followed up a year later with Twisted Metal 2, a game that had a significant impact on my childhood. It was creepy, edgy, and the right amount of goofy. Discomforting cutscenes, creepy characters, lots of fire; it fit with the mid to late ‘90s theme of pushing the limits of taste. It was also really, stupidly fun.

But then developer Singletrac got bought up and the rights to Twisted Metal stayed with Sony. They passed development onto 989 Studios, a division of theirs that normally just acted as a publisher. Their first result was Twisted Metal III, and we’re going to need the jaws of life to get through this wreckage. 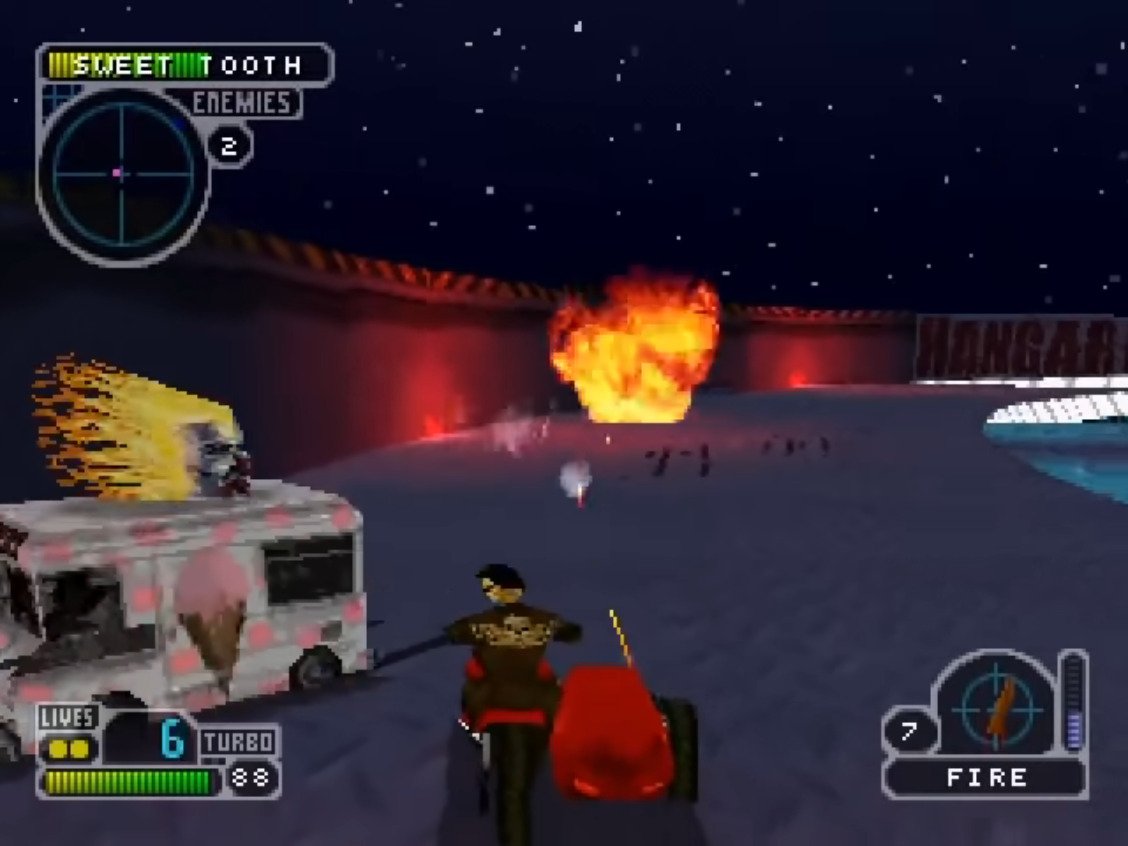 It’s off to a bad start before you even get to pick your car. The cool and unnerving comic-book style cutscenes have been replaced by gross PS1-era 3D animation. It’s also hard to ignore that Rob Zombie is blaring away as the combatants are demonstrated. Then there’s grandma in a monster truck. Look, I know that some of Twisted Metal 2’s combatants were a little out there. Axel was just a dude between two tires. But Rob Zombie, love him or hate him, elicits a certain atmosphere, and grandma can’t breathe in it.

At the very least, Twisted Metal III isn’t a big departure. You still pick your favorite family sedan and duke it out in a variety of arenas in a deadly battle royale. Areas continue the world tour sort of mindset with levels taking place in Washington D.C., the North Pole, and London. The foundation is there; they just decided to build the house out of whipped cream. 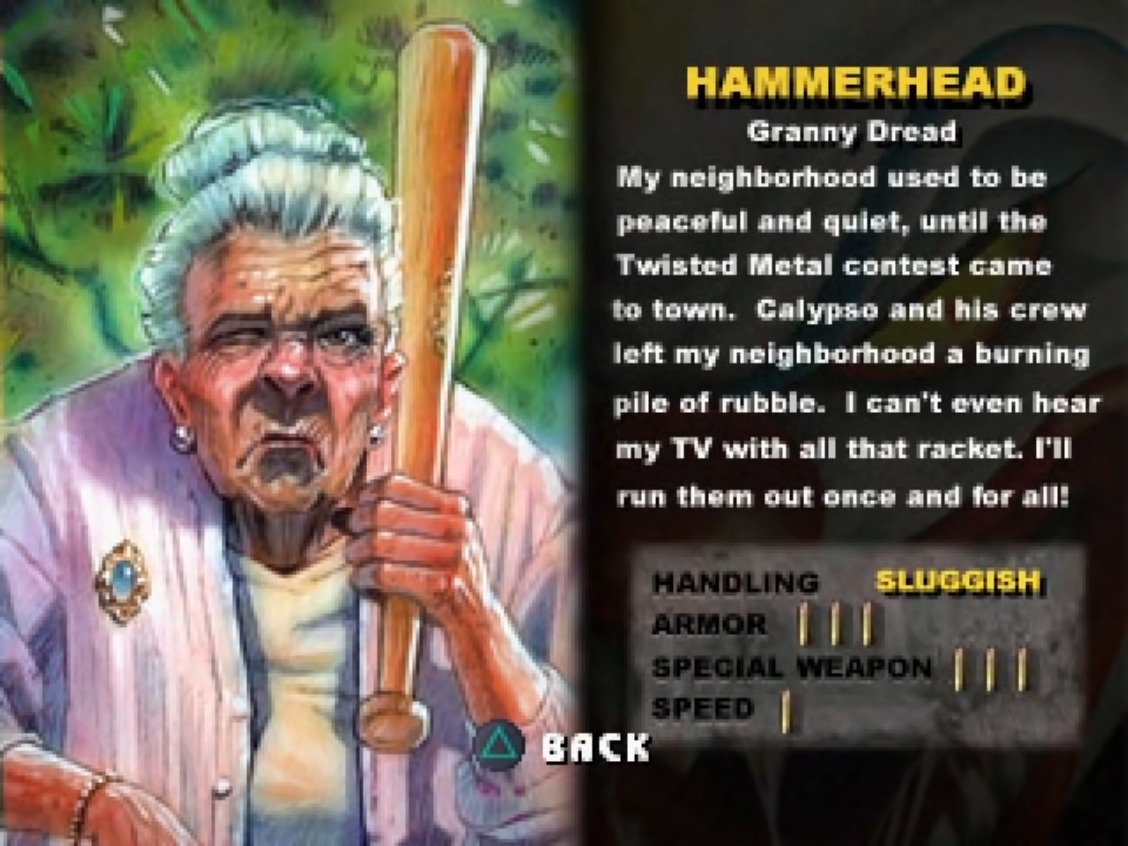 Mechanically, the game went through an engine change and it kind of feels wrong. Critics at the time were pretty perturbed by this, and while I can’t say I was too offended, it’s different enough to feel like a knock-off. Where I do agree firmly with those critics is that the levels are garbage. There are a few decent ones, but most of them are just big open arenas with little to explore. Twisted Metal 2 had these elaborate maps where you could destroy things to change the landscape. Here, you might as well be in a bowl for many of them.

Some are decent, like the North Pole, but for some reason, they plunked down Santa’s Workshop in the center of it. It’s a great example of how confused this game is. Here we have a world where people kill each other to have their greatest wish granted, but also Santa Claus exists to give presents to all the good girls and boys.

I can’t think about it without a huge juxtaposition spiraling in my head. I’m reminded of Twisted Metal 2’s opening cutscene where a guy is bleeding out on the street screaming, “Calypso, what have you done!?” and then here we are at Santa’s Workshop. Playing the two games back to back could give you whiplash. To be fair, I don’t know what else you’d use as scenery for the North Pole, but they did an Antarctica stage in the previous title and they didn’t even have to throw in the Mountains of Madness. Though, really, that would have made a lot more sense. 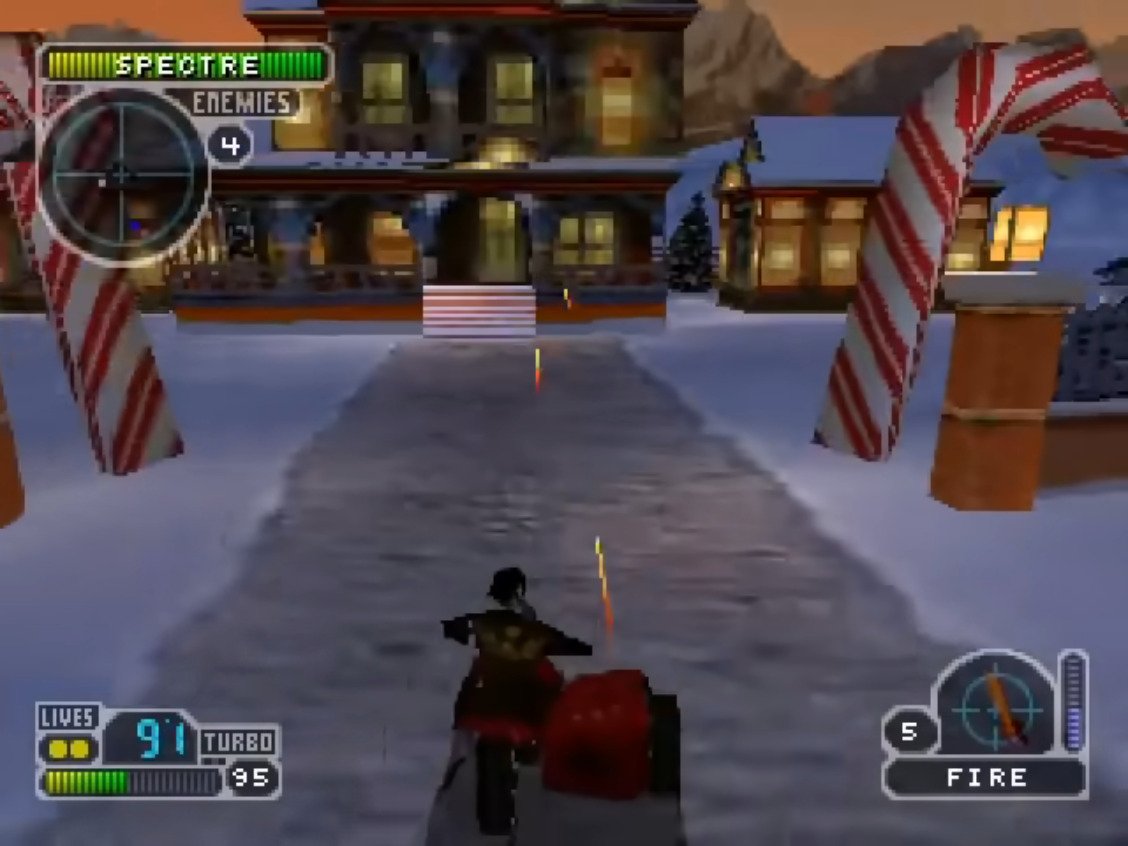 The tonal change is practically offensive. The first two games were darkly goofy, but here we have a game that sounds like it was put together by people just trying to fill in the blanks. Take the character of Bruce Cochrane, for example, who was in the first three Twisted Metal games driving Thumper. His wish in the first game was to clean up the violence in his neighborhood. In the second, he wanted to rule the world. In the third, he wants to “forever hang with his homies.” That’s cute, I guess, but what was preventing that to begin with? Why did he need to kill people to get that granted? Did his parents have a curfew set for him? Can his homies only stand to be around him for short periods?

The wishes, in general, are pretty stupid if that wasn’t enough of an example. There was a wide variety of them in the first two games, with some challengers using it to get back at tournament mastermind, Calypso. Often they were monkey’s paw scenarios where Calypso would twist the winner’s wish into something horrific. Here, they’re all one-note, and they’re all bad. I don’t want to spoil any of the endings, but I will say that they have all the creativity of a math equation. 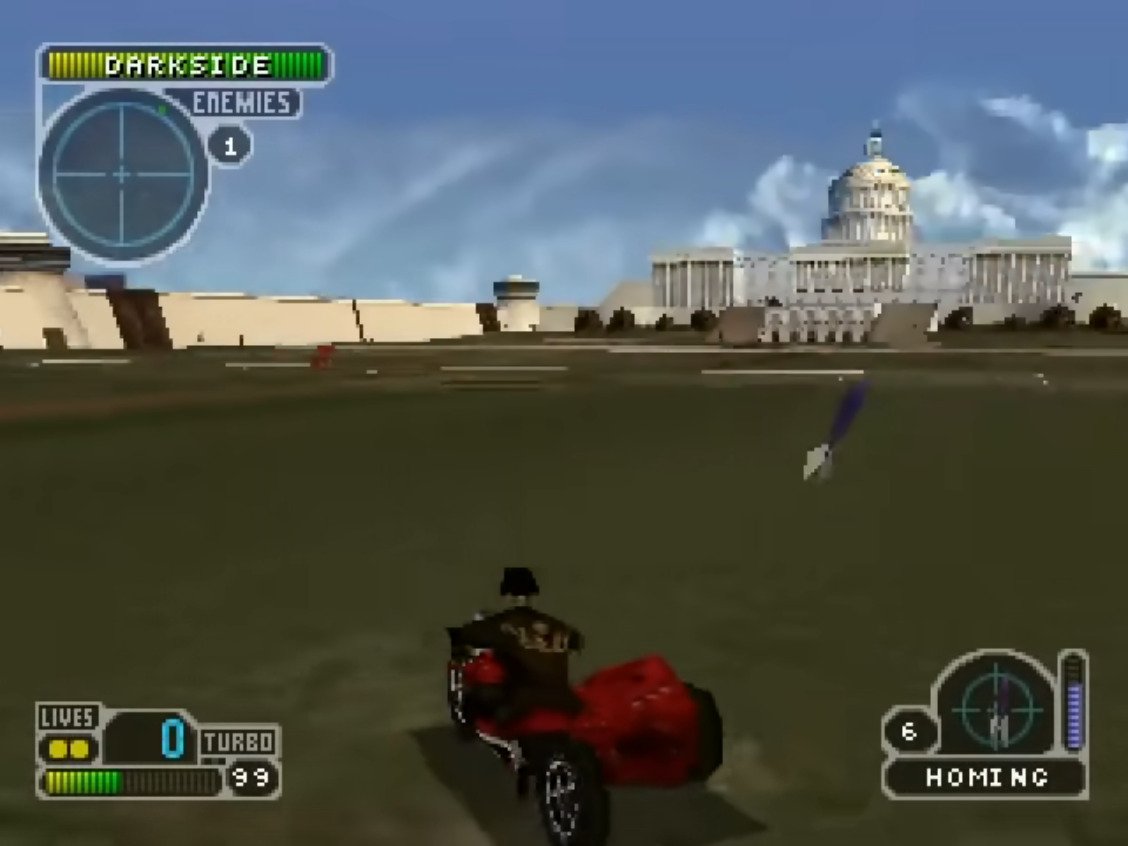 Personally, I was disappointed by how they handled Calypso entirely. In Twisted Metal 2 he would just show up for the cutscenes, and he was just a really creepy dude. He was played by Mel McMurrin, as he was in this title, who did a great job hamming it up. His voice is full of delight at the thought of people getting mutilated. Here, not only is he considerably less threatening, but they over-used him to introduce each of the levels. It puts a different tone on his character when he’s warning you about the dangers you’re facing. It makes him sound less sinister and more chummy like he’s punctuating his sentences by winking and elbowing you in the ribs.

It’s like someone dumped all these wonderful toys straight into the lap of 989 Studios and they turned them into a diorama. Rob Zombie aside, the tone is a lot lighter, but somehow it manages to be less fun. Twisted Metal hit a sweet spot when it came to edginess, and rather than attempt to find it themselves, the new developers just rolled over and went back to sleep. 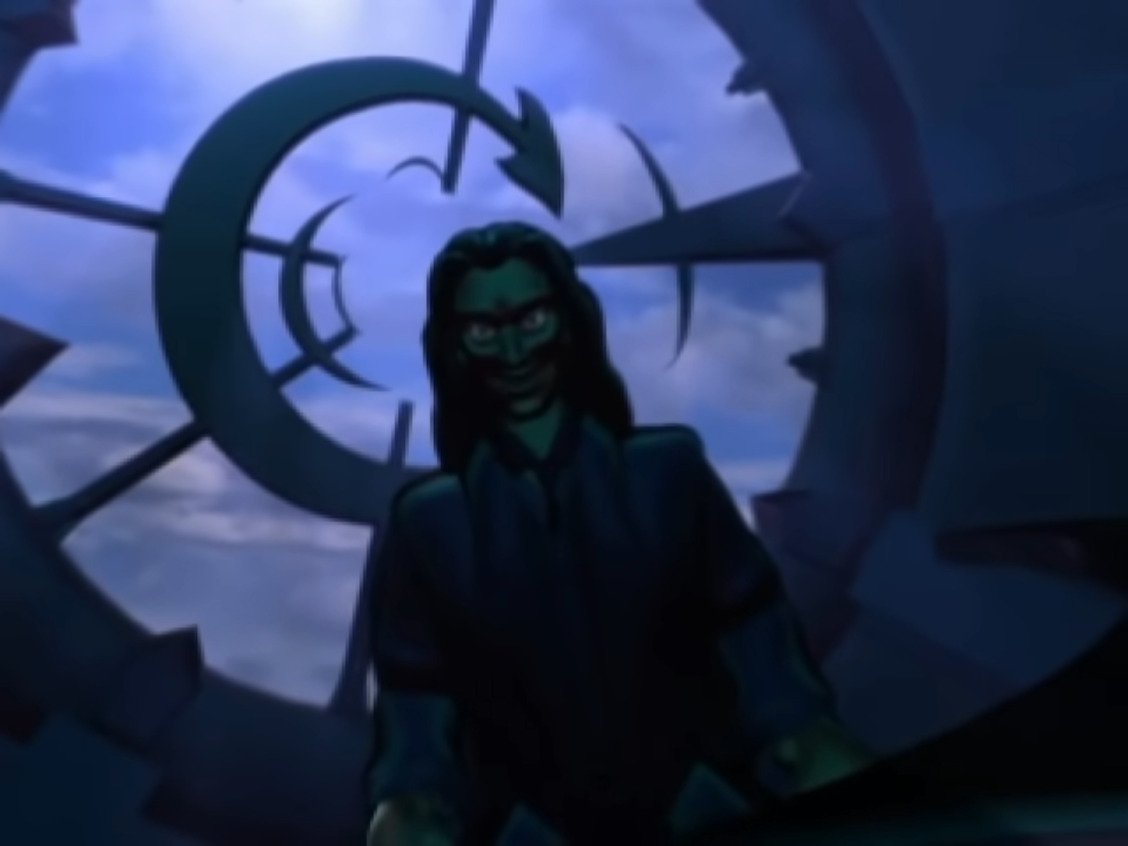 What’s truly humiliating is that Vigilante 8 released early in the year, presenting one of the first significant competitors to the vehicular combat throne. It gave us a slightly different take on the formula, but it did so with pizzazz and creativity, something that is completely absent from Twisted Metal III. To illustrate this point, I played a lot of Vigilante 8 in my youth. I never played Twisted Metal III until I was an adult.

We’d eventually get our stupidly edgy Twisted Metal returned to us with Twisted Metal: Black. This was after 989 was taken off the franchise and the reigns were handed over to Incognito Entertainment, a company formed from the remnants of SingleTrac. At that point, however, vehicular combat games were on the way out. We’d get a few more exciting entries in the franchise, but it’s been quiet since 2012. It’s unfortunate because I think the genre could benefit from recent advances in technology, but no one seems interested.

As for Twisted Metal III, it’s the absolute nadir. Twisted Metal 4 was maybe slightly an improvement, but it still deserves to just be forgotten. It’s like seeing a beloved horror franchise get turned into a straight-to-video series where none of the actors return and it goes for a PG rating. It’s like getting a package full of candy but then finding out that the candy is really just chalk. You can eat chalk in small amounts, so let’s just swallow our disappointment and pretend it never happened.