Shivering Isles is an unending well of ‘yes’

The Elder Scrolls: Legends was met with a tepid response upon its early 2017 launch, but thankfully Bethesda hasn’t given up on it.

Over the course of the past few months I’ve been really taking to it, due in part to its studio swap and interface overhaul that heralded in some fresh ideas, injecting new life into the game. Their commitment to making Legends cross-platform all-around is also commendable, given that it will be one of the only digital card games in existence to be playable onPC, mobile and all major consoles if they pull off the latter later this year.

Whenever those versions do arrive they’ll also benefit from numerous expansion drops, like the recent Shivering Isles-themed Isle of Madness. 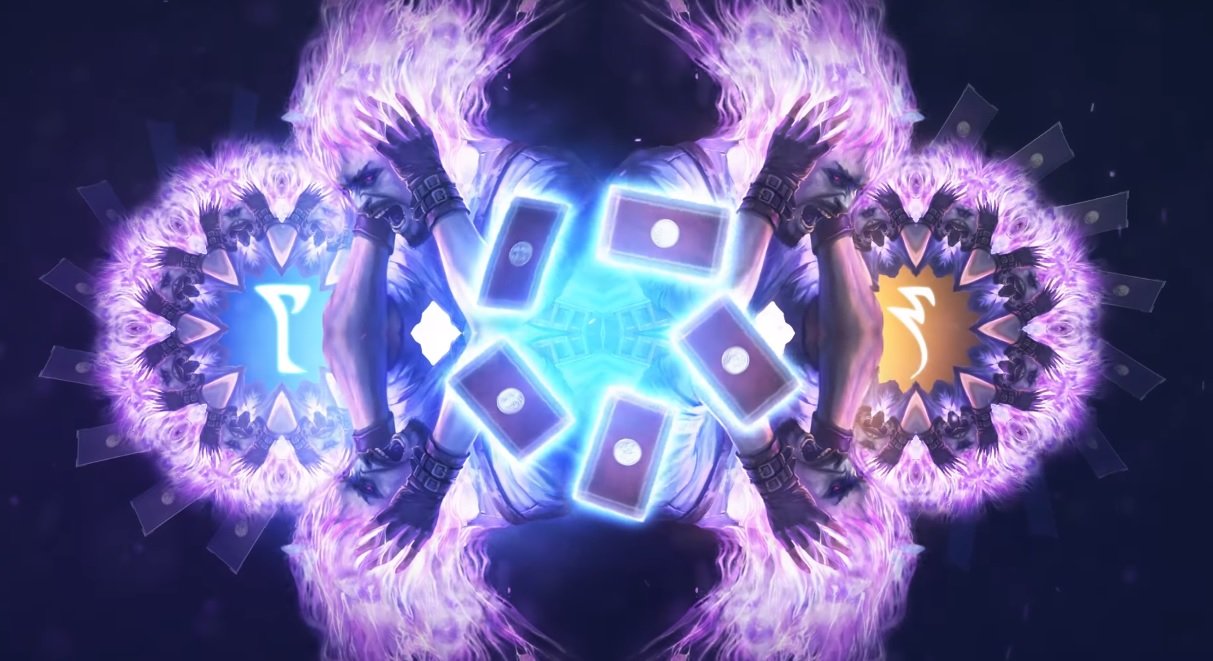 We’re immediately thrust into the plight of Talym, a dunmer in dire need of assistance for his son, who has sunken into a state of mental instability. He immediately seeks out Sheogorath, the Prince of Madness, hearkening back to 2007’s highly celebrated Shivering Isles add-on (the best part of Oblivion).

Before I dive into the expansion I’ll do a little refresher on Legends, just in case you haven’t played before. It’s a digital card game, sure, but it has a few nuances that allow it to stand alone: the lane system and the Elder Scrollsflair. Trumping shallow instances of “I remember [x] creature from [x] game!,” the cards really flow into the funnel of Legends, playing off each other in interesting ways.

The concept of crafting “tribal” (same-faction) decks is even more appealing in Legends, as the team has worked hard to create a synergy between them in addition to their lore implications which, by the way, are heightened by the campaign-heavy focus of the game (which I’ll get to momentarily).

The “lane” system is the big hook. Creatures attack other creatures or players as is traditional in player-versus-player card games, but in Legends, you can place them in one of two lanes. While their functionality varies in specific campaign missions, for the most part, the right section is a “shadow” lane that allows cards to lurk with an untargetable status for a turn. This inherently doesn’t change up the game in a big way: rather, it’s the entire two-lane system that shakes up your approach.

With lane-specific mechanics (like summoning clones if lane requirements are met) and ways to work around certain creatures, it quickly becomes a game of placement on top of the typical decision-making process of throwing down a potentially vulnerable creature. There are many times where I’ve been able to secure lethal (game-ending) damage and missed it due to the tricky nature of the lanes.Legendsalso revises and rewords a few classic card game keywords (“breakthrough” instead of “trample,” “drain” over “lifelink”) to keep things familiar.

New blood Sparkypants Studios (and by proxy, the former one, Dire Wolf Digital) have really worked through some tricky puzzle solutions over the past few years. Even the first quest is fascinating, as your opponent only uses animated weapons and armor in the fight. If you kill a piece of loot with a minion and live through it, it’ll automatically equip it. That segues directly into the next quest, as said opponent provides you with a story item that can help kill the keeper of the Gates of Madness. A nervous giant that hates rats, a fortress with trophy cases to smash and loot, moonlighting as heroes: there’s a lot of surprises in this three-act, six-episode tale.

One of the things I love about Legendsis its focus on chronicle-centric single-player content (dubbed “storymode” releases) on top of normal card expansions. While Hearthstonestarted off strong in this regard, Blizzard has completely moved away from a narrative focus, instead providing “endless”-style dungeon-crawling motifs. I dearly miss the tales of old where you’d unlock thematic cards and journey through interesting tales, so I’m glad other studios are picking up the torch.

Due to the marriage of puzzles and story, I was swept up inIsle of Madnessfrom start to finish.The Elder Scrolls: Legends has greatly improved since launch: if you haven’t checked it out yet or lapsed in its infancy, give it a shot.