“Let’s play a horror game. I got this in a used sale at GameStop,” Eric said one Saturday afternoon, many moons ago. Why the hell not? The two of us, with his little brother in tow, stared at the cover of an unfamiliar title. Clock Tower 3. The front had what looked to be a school girl gasping at a risque joke told by her drunk uncle, Terry, and the back had some nonsense about terrifying excursions. Looked goofy.

We turned the game on, and were treated to some pretty standard horror tropes. There was a young and frightened protagonist, a spooky and mysterious location, and some little girls with bloodfaces playing pianos. Ho-hum. As I ran around and hid in closets from supernatural perverts I couldn’t help but think how silly the game was. By the time I was asked to use celestial arrows to pin down the handsy departed, I had totally let my guard down.

A cutscene showed us a grisly murder committed by a psychopath who used acid to both murder his prey, and dispose of the evidence after the deed was done. The Corroder, they called him. Spooky stuff! But I’m a fuckin’ man. I’m sixteen years old. I got this. 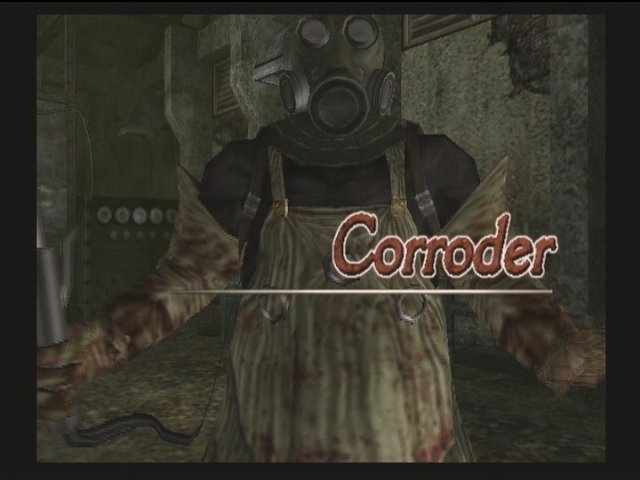 As The Corroder chased me around the corridors of some abandoned facility, I figured I could just round corners and wear him out to avoid an unpleasant acid bath. I managed to elude him for a few screens as I deftly skirted in and out of alcoves from my fixed-angle perspective. Ha, look at me! I made it to the end of this hallway! The Corroder is such a stupid fu-

I don’t know if that was the sound of The Corroder that blasted out of the TV when he rounded that far-off corner right as my character arrived, or the sound we three Precious Moments porcelain china figures made when we collectively lost our shit. Eric shrieked and covered his eyes, I fell backward out of my chair and bounced my head off the carpet, and his little brother screamed like a xenomorph queen giving birth and fled the room entirely.

I’ve shared my shame, so now share yours! What’s the scariest moment you’ve ever encountered in a video game? Share in the comments below. And for more spooky fun, be sure to check out this month’s Bloggers Wanted prompt, where we ask you to blog about a time you faced a fear of yours in your gaming exploits.