Will the delay keep the wolves from your door?

[Update:It appears as if the issue is under control and will be patched today.]

A “late-breaking technical issue” has delayed the roll out of the latest Destinyupdate.

Patch 1.2.0 was supposed to lay the foundations for the upcoming House of Wolvesexpansion. As yet, there’s no word on when the delayed update might eventually hit consoles. 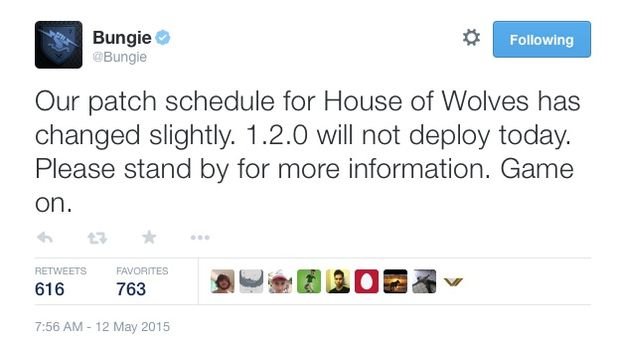 Does this mean House of Wolves will be late? Not necessarily. But right now, those wily foxes at Bungie are keeping us minimally informed and not going into specifics.

“I’ve spoken with the finest minds at Bungie about Update 1.2.0 just moments ago,” writes Community Manager, DeeJ, on Bungie’s forum. “They’re working to correct a late-breaking technical issue that would have impacted the way the game launches for a large portion of you. Progress is being made.”

“We’ll be sharing new details on the deployment schedule that leads to House of Wolves as soon as they become facts. At the very least, you’ll hear from me once a day about this. Hang in there, and thank you for your patience.”

Like DeeJ, we’ll keep you posted. Remember – you’re not dead yet, Guardian.