Use the Keyblade to trash Wall-E

The LinkedIn page for a Square Enix employee has leaked the existence of Kingdom Hearts 2.9 for the PS3 and PS4, as well as previously unknown information about Kingdom Hearts 3. 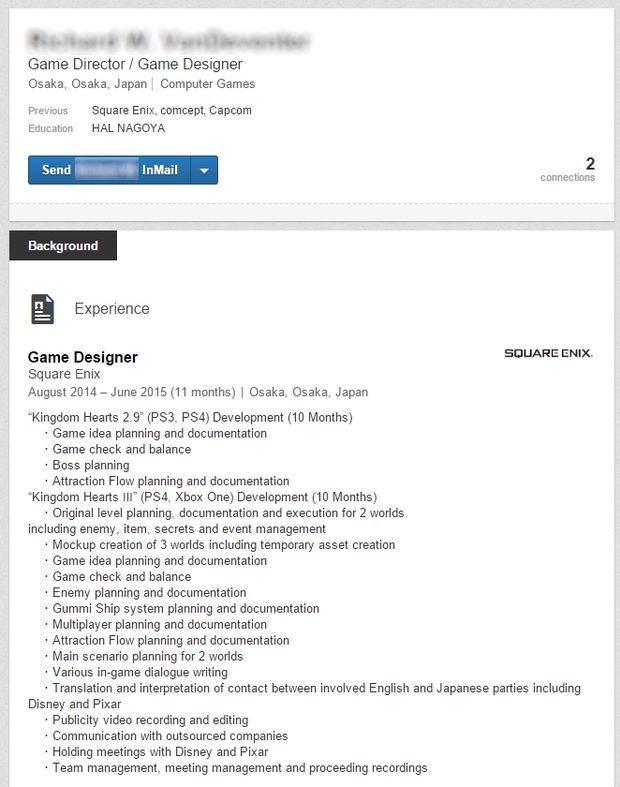 The employee, who was a director and designer in Japan, worked for Square Enix until June 2015. Before that, he worked for Capcom on games like Resident Evil 6. You can only see his LinkedIn profile if you log in, so here’s a handy screenshot I took.

Right up until he left, he was working on Kingdom Hearts 2.9, which is more than likely another re-release of previous games in theKingdom Hearts series. The series hasn’t seen a release on PS4 yet, so it makes sense for there to be one in the run-up to KH3. The name itself is kind of taking the piss though. Look forward to the inevitableKingdom Hearts 2.1473672 coming Summer 2020!

What he was doing as part of the development team for Kingdom Hearts 3 is also listed in great detail. The biggest additions are “Multiplayer planning and documentation,” and holding meetings with Disney and Pixar. Pixar has never been featured in a Kingdom Hearts game despite being owned wholly by Disney for a decade now. Kingdom Hearts 3 seems like the perfect time to introduce it.

So, multiplayer Kingdom Hearts with a Monsters Inc world sound good to anyone else? I bet we’ll hear more about Kingdom Hearts 2.9 at the Tokyo Game Show this month.