Madden 16 simulation predicts which players will be arrested this season

Hide their kids, hide their wives

The launch of Madden 16 is still months away and while many of the new game mechanics and features are being kept a secret, the developers today did reveal one addition to the storied franchise that will tell gamers which NFL players will be arrested this year.

“The goal of Madden has always been to give players the most authentic professional football experience ever,” said producer Chad Montgomery. “Last year we took steps to make defensive play as lifelike as possible. This year players can look forward to seeing some of their favorite athletes and possible heroes taken into custody after getting a DUI or beating their wives and children.”

This new feature is thanks to the Bad Boy engine which has been in development since Michael Vick first adopted a puppy. With the recent release of the 2015 NFL schedule, Montgomery gave the press a demonstration of the engine’s accuracy. A simulation of the upcoming season anticipated 47 arrests to occur between September and February for various crimes, including: DUI, child abuse, domestic abuse, carrying a gun onto an airplane, hitting a woman outside a T.G.I. Fridays, illegal street racing, illegal horse racing, illegal three-legged racing, smoking pot, smoking crack, smoking pole, being black in Baltimore, soliciting sex from an undercover police officer, soliciting sex from a uniformed police officer, and having a glass of water in California. 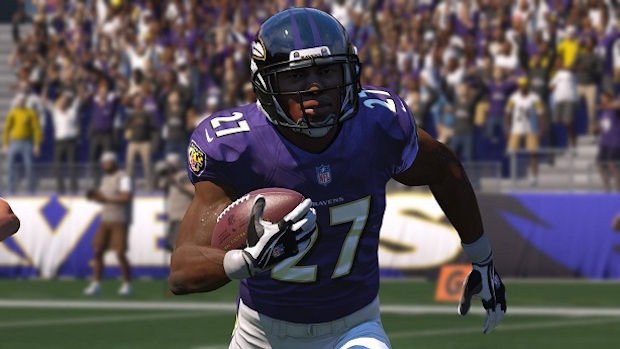 Montgomery admitted while predicting the arrests is easy, there is one aspect of the Bad Boy engine that still needs work.

“Right now we’re trying to get all the algorithms in place that will predict, with 99.9% accuracy, exactly how Roger Goodell will lie to the public to avoid any sort of responsibility for the actions of his players.”

The Bad Boy engine will also change the way players experience individual games. Last year’s Madden upped its presentation so each game of the season looked as though it were a real NFL broadcast. That continues in Madden 16 where after every quarter players will have to sit through a “No More” commercial featuring the dead, beady little eyes of NFL Quarterback and special needs adult Eli Manning.

In related Madden news, Michael Sam, the first openly gay man to be drafted to an NFL team, announced today he will be appearing in Madden 16 as a spectator in the crowd because he’ll never be good enough to make it onto the field.