Mario Maker will make a level designer out of you

Mario Maker is a drag-and-drop level creator, letting you use classic (and newer) Mario game tiles and props to create your own stages. I gave it a spin here at E3 to try to create the next great Mario stage. I found that while making your own stages is quite easy, making a truly fun one takes a bit more work. 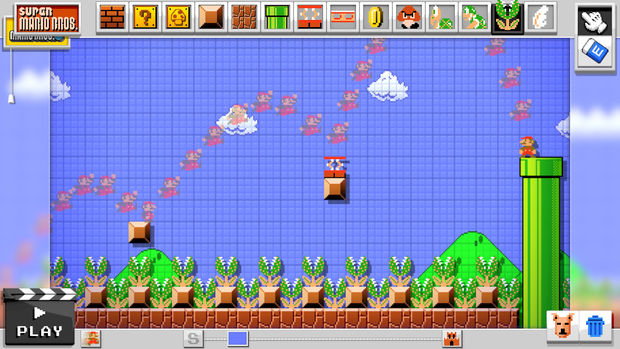 It’s incredibly easy to put a playable Mario stage together in Mario Maker. The Wii U pad’s touchscreen lets you use the stylus to pick tiles to drag and drop into place on a gridded 2D playing field. Bricks can become staircases with a few taps, pipes can be resized by dragging, and moving platforms can even be programmed to move different directions, all through simple stylus taps. Enemies can be dragged into the scene just as easily. And when it’s all done, simply set Mario’s starting point, hit play, and begin running through your own creation. It all comes together so easily that you’ll feel like a proper level designer in no time.

But playing my first creation wasn’t as fun as I thought it would be. There was no real challenge from my enemies or platform placements. It might as well have been a straight run forward.

Going back in, I played with jump distances, making it so that only a running jump would make these gaps. I also hid enemies in the cracks where one might fall from a run. While creating these challenges, new ones sprung to mind. I thought about making it so that moving Koopa would fall at about the same time Mario would come across a certain point in a stage. I also liked the idea of somehow requiring the use of the springboard to make it to platforms. My second creation was certainly more interesting than the first, though I was still having more fun in the creation stage than in the play through. 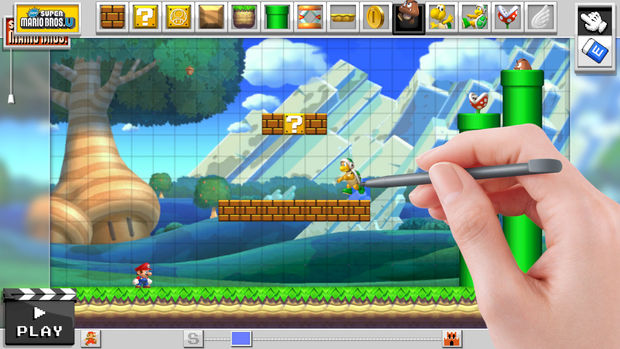 I love the idea of making something horribly difficult and then passing it along to a friend to have them try to complete it. I’m sure that’s just one part of Nintendo’s plan for Mario Maker. They’re not prepared to share much more than we saw today. When we asked about social and sharing features, we were told that we’d have to wait for more details.

They would at least say that more stages and props from other games are coming. This demo let us create and play in either classic NES Mario and New Super Mario Bros U modes, and the creations could easily be switched to be played in either mode. I’d love to see them get creative and add more sets from games like Super Mario Bros. 2 or even Super Mario Land.

But even as it was today, from what little I played, I could see me spending a lot of time creating stages in Mario Maker.I hope I get to share some of my stages with you soon.

Details are light right now, but we know that Mario Maker will be coming to Wii U some time in 2015.