Mewtwo in Smash Bros. for the Wii U and 3DS is on the juice

A new era of Smash Bros. has arrived. Speculation about who’s going to be next icon to join the all-star roster can become a daily part of our lives again. Starting today with the original uber-Pokémon Mewtwo, the age of Smash Bros. DLC roster updates has officially begun.

Dramatic! Amazing! Or at least, that’s how it felt.

The reality of playing Mewtwo in Smash Bros. for the Wii U and the 3DS will probably feel a lot less climactic to a lot of you, at least at first. The announcement of his inclusion in the games was incredibly exciting, as it brought with it the promise of prolonged hope for fan-favorite characters to appear in future DLC updates. The actual arrival of Mewtwo in the games is a different story. Hype has not been kind to the genetic Pokémon. Unless you’re already a huge fan of the character, or not already familiar with him from Melee, you may be initially underwhelmed by his grand return.

Still, anyone who sticks with him will find that he’s an interesting and fulfilling addition to roster. He’s different enough from how he played in Melee to inspire exploration, while familiar enough to please most loyalists. 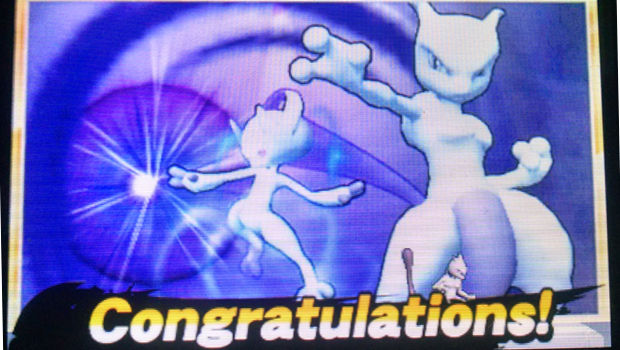 Mewtwo has grown up a lot since hisMelee days, where his design was largely based on his big-headed origin in Pokémon Red/Blue.Since then his legs have gotten bigger, his arms have gotten longer, and his head has gotten a lot less bulbous. In Melee, it seemed like a lot of his psychic attacks were there to compensate for his baby proportions. Now that he’s become more physically formidable, that added psychic flair seems less like a necessity and more like a sassy style choice.

He’s also a good head taller than Lucario, his former replacement. That’s sure to make a lot of long-time Mewtwo fans happy. Seeing him tower over his crowd-pleasing, dog-faced protege feels appropriate, given his status as the original uber-Pokémon.

Mewtwo was only just released to the public today, so it will be a little while before we discover the details around his various moves and properties. From what I’ve played so far, he has two major changes in his normal move set. His neutral A combo now ends with a swipe that that sends enemies flying, and his down air A is now a down thrust punch that really packs a wallop. Both changes are quite fitting given his newly gained girth and stature.

As for his Smash Ball attack, he takes the form of Mega Mewtwo Y and dishes out some potential instant-kill damage with a fast-moving psychic shadowball. It’s strange that his beefier Mega Mewtwo X form is nowhere to be seen here, but maybe I just haven’t found him yet.

If you’ve discovered anything else about Mewtwo, or any other aspect of the latest changes to Smash Bros. for the 3DS and Wii U, let us know in the comments. I heard Diddy got nerfed today, but I’ve been too busy having fun with Mewtwo to find out.