Miiverse: may we never forget

In the last issue we looked back at various spooky mythos in video games, PC Gamer’s continuing unprofessional attitude towards a plea for help, and the topic of death itself!

However, for this issue we’ll be mourning the death of the Miiverse (which shut down earlier this month) and looking back through the years at the pure insanity and magic of it all.

…But first, a groundbreaking discovery from Usenet in ’96! 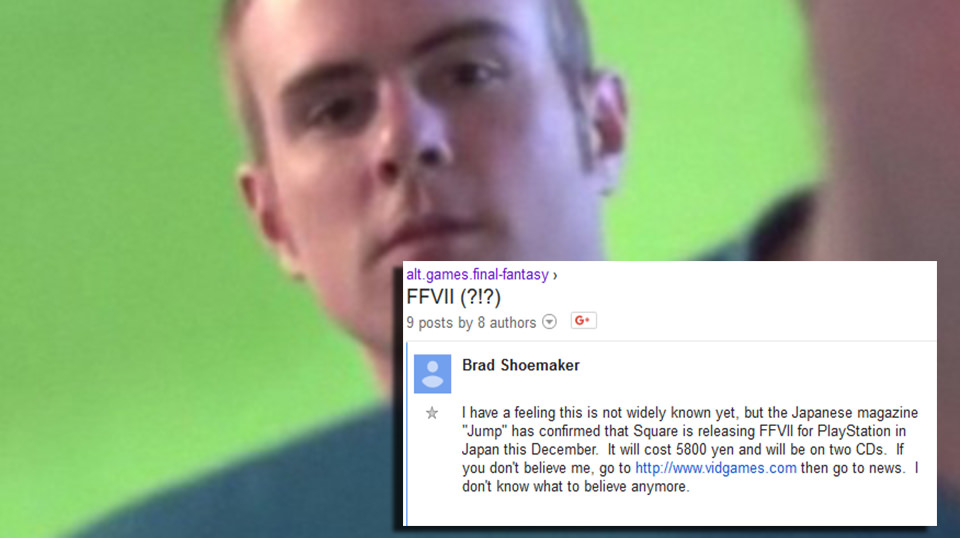 Prior to the release of Final Fantasy VII in early 1997, many were speculating whether or not the next entree in the series would even be on a Nintendo platform altogether, due to how expensive manufacturing cartridges became compared to CDs. However, a user named Brad Shoemaker (maybe a distant cousin of Alyssa Hatmaker!?) of Usenet in February ’96 broke the news of Final Fantasy VII being announced for the PlayStation! Also, remember that if you do not believe this man, be sure to head on over to “vidgames” and go to news. (Oddly enough, I can’t find anything from before 2008!?)

This “Shoemaker” in later threads would go on to discuss his findings from Jump issue #11. Giving us great insights such as: “The grafx are awesome and it looks like this will sell LOTS of Playstations!” and “I agree, this game looks REALLY cool. I forget the names of the girl and the guy with the big gun, but the guy with the sword, Cloud (Claude?) seems to be a wandering mercenary.” 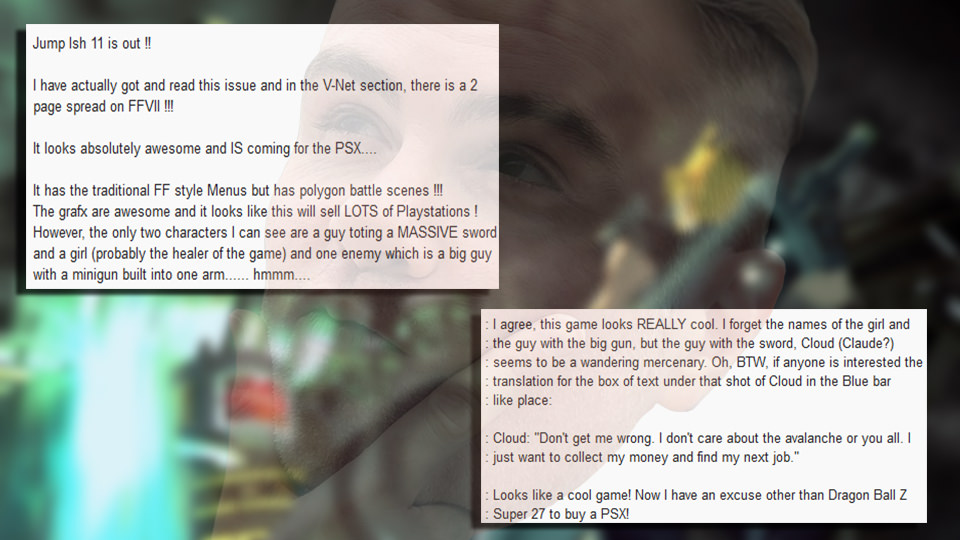 The announcement for a Final Fantasy game starring “Claude” outside of a Nintendo platform sparked a great deal of outrage in the community at the time, with tons of threads in the following days discussing the announcement and with wonderful posts such as: “This must be a joke! A cruel, sick, unfunny joke!” and “You know what this means. We will never get those games we’ve wanted for SNES. If we are unlucky, we won’t get FF7 for N64. I say, LET’S MAILBOMB SQUARE!”

I bet that mail bombing did the trick! It did come out on Steam after all…sixteen years later. I’m just glad that Brad fellow had an excuse other than “Dragon Ball Z Super 27” to buy a PlayStation. With that said, let us go back to the wonders of the Miiverse and reflect on what lessons these jewels of the past may teach us going forward.

H2O video game coverage will never be the same 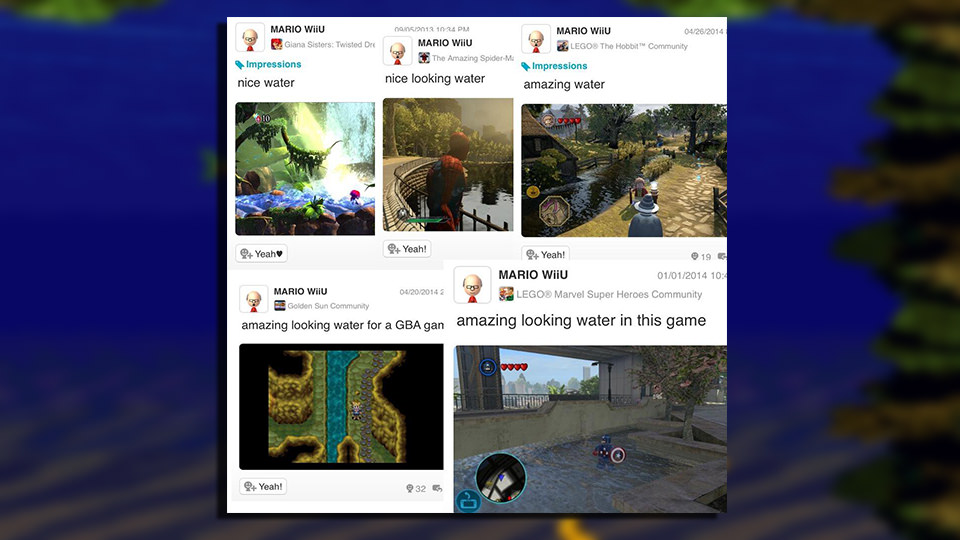 With the Miiverse now officially shutdown, how will I get my video game water insight from MARIO WiiU? I believe this is possibly the greatest injustice of the Miiverse being gone, as nobody else in the industry is giving the hard facts on water within video games. Take for example our own Chris Carter with his “review” of Super Mario Odyssey. Sure, he delves into the journey being the draw over the narrative and gives his take on the complexities and mechanics of the game — but does he ever mention the water? How do I know if it’s amazing or nice!?

With the Miiverse dead and MARIO WiiU’s video game H2O insight along with it, I now had to purchase a copy of Super Mario Odyssey with unknown expectations of what I may encounter with the game’s water aesthetic. But, fear not, after having spent countless hours moon hunting in both the Lake and Seaside Kingdom — I feel I can give a fair and balanced insight on the water within Super Mario Odyssey for other fellow video game H2O enthusiasts.

Squids were a mistake 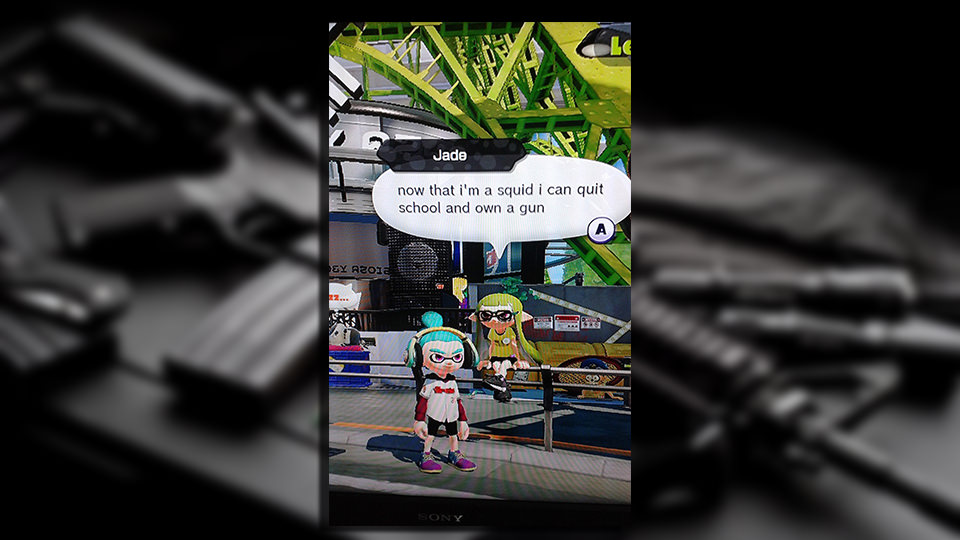 If you’re a kid, who also happens to be a squid, you can now quit your education and legally obtain a firearm! Truly, we’re in the darkest timeline. So, next time you see a squid kid, back up or get shot up.

I have so many questions 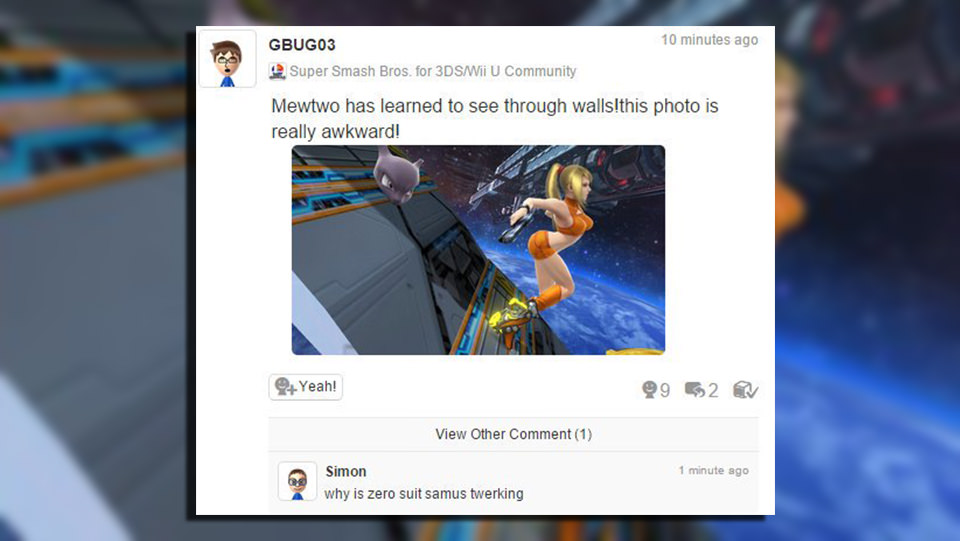 With the Miiverse gone, we’ll never truly know all the answers. For example: when did Mewtwo gain the ability to see and go through inanimate objects? Was this a new feature in recent games? Do poké balls even work on Mewtwo with this new ability? And, of course, why is Zero Suit Samus twerking? Maybe it was intended to be a mystery from the start. 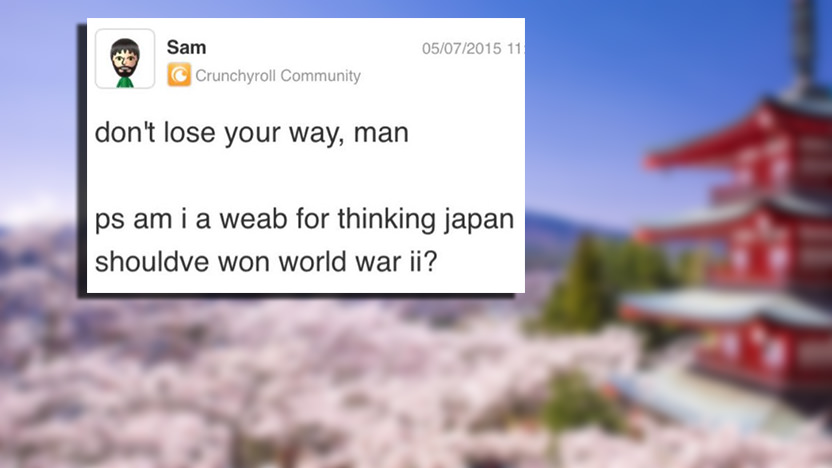 Yes, if you feel or think this, one could describe you as a “weab.” With the Miiverse now gone, I sure hope Sam never loses his way and does something he might regret.

I know these feelings well 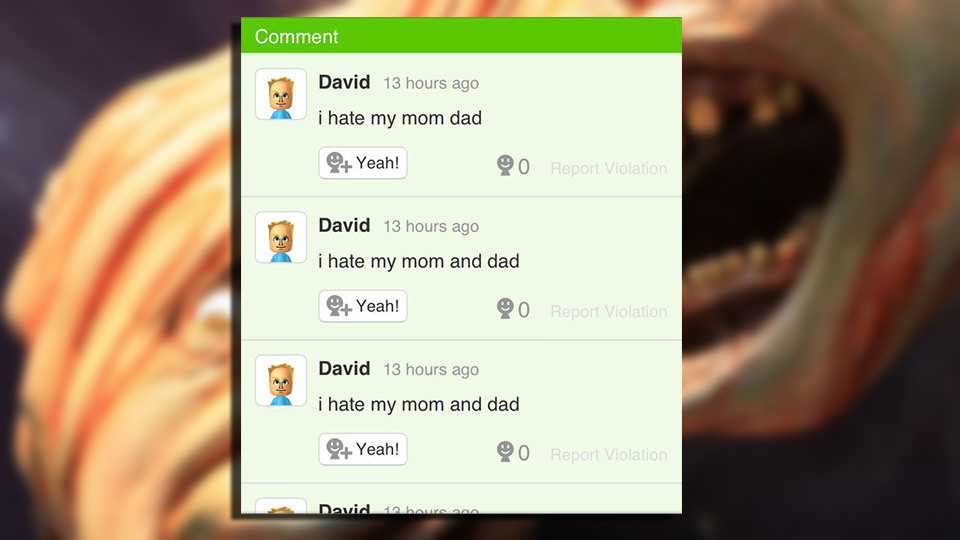 When I was growing up, my mom and dad sometimes really get on my nerves. But man, let me tell you, my “mom dad” really gets to me lately. Especially when they’re all in the same room yelling at one another over custody (despite the fact I’m 25 years old). Things do get better though, eventually the mom dad will absorb you and your family into its collective, then let the good times roll!

Yeah! Rub that 13.9 million life time sales in their faces!

Sometimes I wonder if there are kids out there that only have access to the internet through their Wii U. You know, the type of kid with the insane over protective soccer-mom or super strict parents in general that don’t let them have a smart phone or access to the computer. 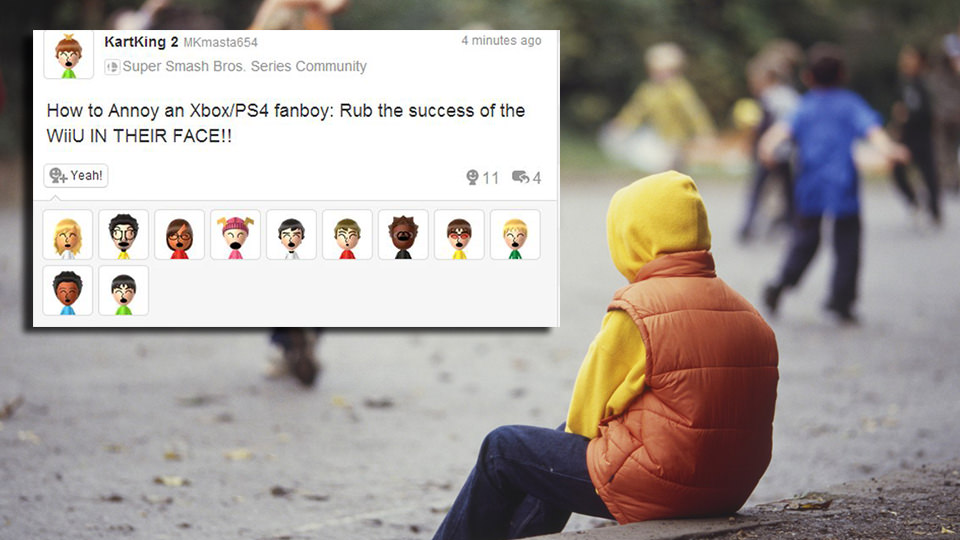 I feel like KartKing 2 might be one of those kids. I can picture him going to school, day in and day out hearing his friends and other classmates talk about their PS4’s and Xbox’s. Finally, KartKing 2 comes home and turns on his Wii U, excited to hop on the Miiverse to escape his “real” friends…

…Only to still get that offline message and not know what’s going on. Man, he’s really going to hate that one kid with the Switch after the holidays, huh? 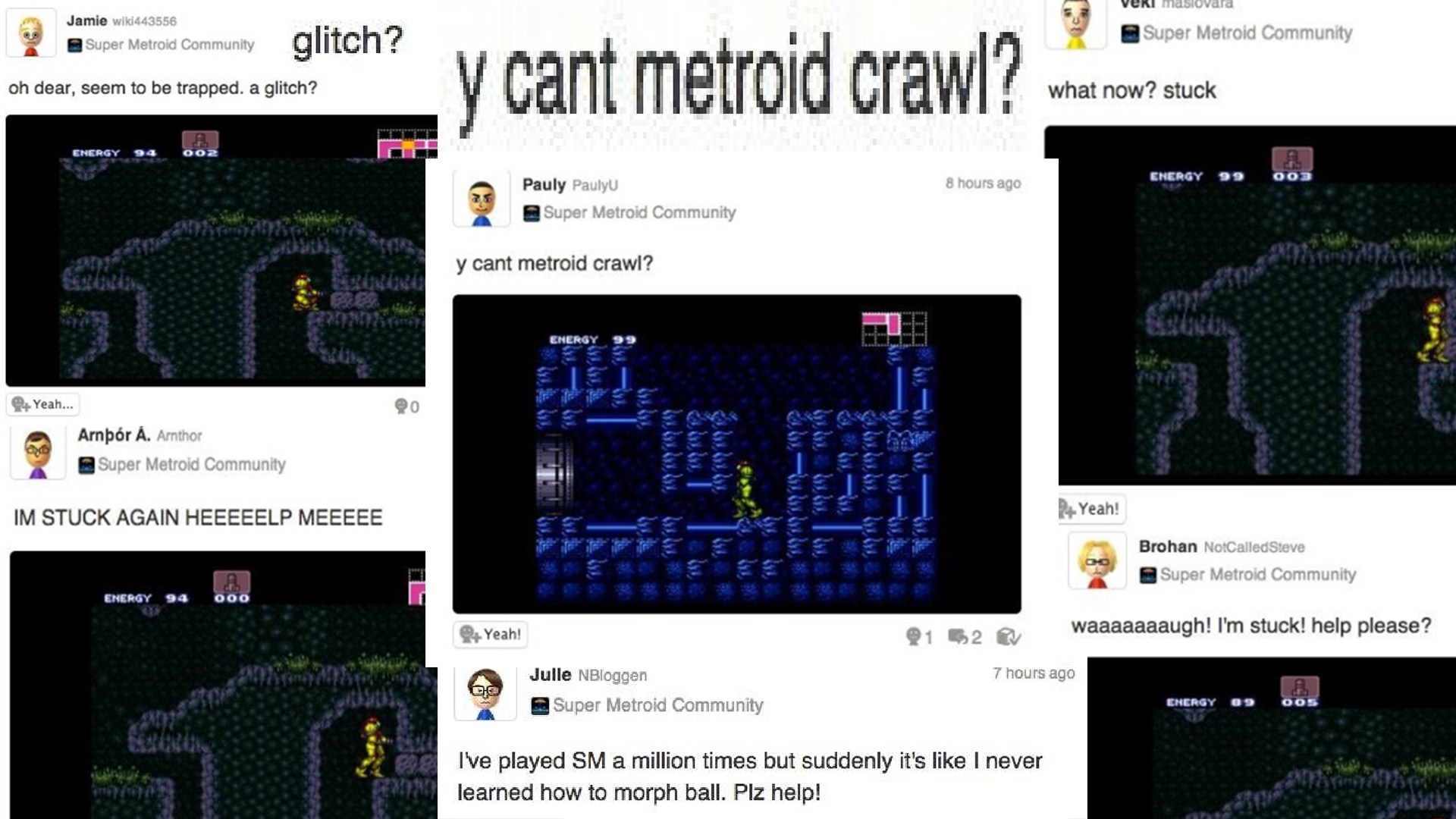 If there is one thing I will genuinely miss about the Miiverse, it’ll be that sense of superiority I had (because I rarely get that) reading the various Miiverse posts on some of my favorite classic games that were re-released for the virtual console. Super Metroid is one of the finest examples of this, as many players within the first few days of the virtual console release were stuck, only minutes into the game, because they had no idea how to morph ball.

However, one such user known as PaulyU that hit internet stardom with his iconic “y can’t metroid crawl” post, ended up doing arguably what most of these people couldn’t — beat the game! In an article from Kotaku back in 2013, Patricia Hernandez dug deep into the Miiverse (something I wouldn’t even do) and through Pauly’s profile, to discover he actually managed to beat Super Metroid…in slightly under eight hours… But dammit, he actually did it!

But, while those poor children are stuck forever in the Forest of Illusion, what are your favorite Miiverse posts? Share them down below and be sure to tune in next month for my special holiday issue!