We had a chance to take a peek at the PS4 version of MLB 14 The Show this past week at a preview event, and it was clear from the get go that the game benefits greatly from the power that the PS4 provides. Now, it’s not like the PS3 version isn’t a great looking game, but a quick side-by-side comparison showed that the PS4 version will be the one to get for MLB fans.

If you can wait about a month, that is. The PS3 and Vita versions step to the mound in April, and the PS4 will follow in May. 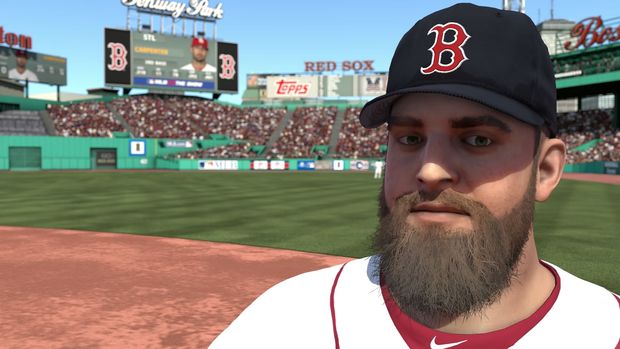 See those hairs in the image above? Pretty gnarly, right? That’s a real beard if I’ve ever seen one. In the PS3 game, this same player is clean shaven (a flat texture map), as the system doesn’t have enough power to draw manage the whiskers we see here. On the PS4, there’s more than enough power. We learned that the PS4 will allow up to 40,000 individual hairs per character, allowing the developers to make spot-on bears, goatees, and more. Each hair was hand-crafted individually, too!

Aside from the hair, I couldn’t quite put my finger on why the PS4 model looked better than the PS3 one in the side-by-side demonstration. But the difference made sense when Sony went into detail about the new lighting model for the PS4 version. Sub-surface scattering lets sunlight and other lighting go into the skin, scatter, and come back out on the PS4. The PS3 has sun hitting the skin and not really doing much from there, which shows sharp changes from light to shadow. The PS4 version’s lighting model lets the light bleed between changes, making the faces of players look much more lifelike. 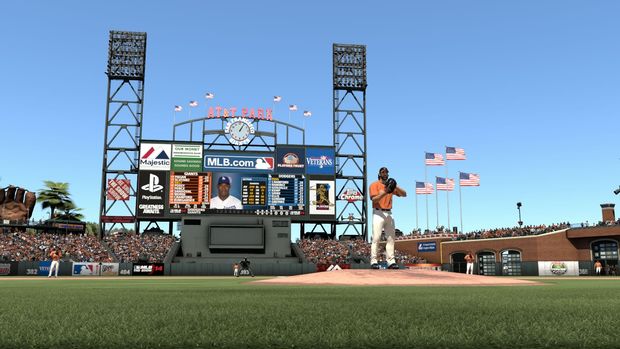 The stadiums also see plenty of visual upgrades for the PS4 version of MLB 14 The Show. Sony says that all of the stadiums have been rebuilt from scratch, and that they were able to go crazy with the details on the PS4. For example, while the PS3 version’s signs are flat texture maps, they have real depth and geometry on the PS4. Scoreboards are just flat textures on PS3, while approaching the same on on the PS4 lets you see real depth as pieces stick out. You can see the difference between, say, leather and metal easily.

The grass is also a flat texture on the PS3, but on the PS4 you can see that feel seem to lay inside the grass. The ball is affected by the grass, and in turn the grass affects the ball.

Even the crowds get a tune-up. The PS3 could use about 42 individual crowd models, which means that you’d be seeing the same 42 people over in over in crowd shots. The PS4 can do about 10,000 individual models, making for a much more diverse crowd. Their polygon counts go up from about 1,600 to a full 10,000 per model on the PS4, which has the PS4 crowd matching the player model polygon count of the PS3 version!

Other nice touches include the addition of brand new audio, stadium-specific chants and signs, and even ball boys and girls. 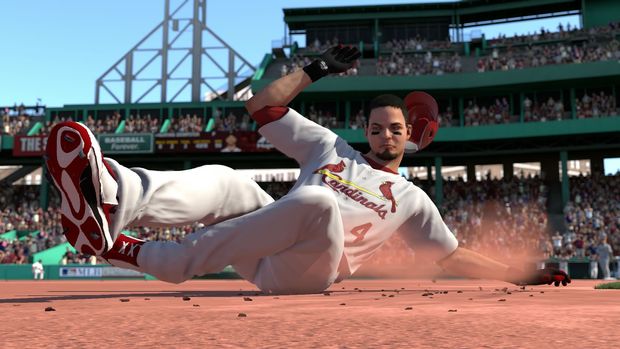 On the gameplay side, the Quick Count addition lets players cut the length of a game in half (9 innings in 30 minutes) through pitch counts that the developers have pulled from the last two years. They take into consideration several statistics to generate counts that have you saving time while still keeping the game firmly in the simulation camp.

There will be no PS3 to PS4 Cross Play, unfortunately. But this will be the first year to support year-to-year saves, meaning that if you buy any version, you’ll be able to take that save file and use it next year. This does work from PS3 to next year’s PS4 version.

The PS3 and Vita versions drop April first, lining up with the start of the MLB season. But the wait for May for the PS4 version will bring 1080p 60 frames per second gameplay with all of the above graphical improvements. You can wait an extra month, right?

In the meantime, check out our gallery for a bunch of PS4 screenshots from MLB 14 The Show.