Murder mystery D4 sure looks like another Swery65 game

Thank goodness for that!

The director of Deadly Premonition is back with a Kinect game called D4. Among the Xbox One exclusives shown at E3, this was right up there as one of the most attention-grabbing. After meeting with Swery65 and Microsoft Studios producer Yutaka Noma to get a hands-off look at the game, I can happily say that this is going to be another weird one. Possibly even weirder than the aforementioned cult classic. Yes, we’re in for a wild ride.

D4 is an episodic murder mystery game, as you might’ve heard. It also uses Kinect, which will surely be met with some groans, but I will say that it’s at least not the kind of motion- and voice-controlled game that necessitates standing. Swery mentioned how he wants players to be able to sit down and eat popcorn while they play the title. He seemed adamant about popcorn, specifically. Does he feel free to be more “weird” after the success of Deadly Premonition? Not really. “Just my style,” he laughed.

The protagonist of D4 is aprivate detective who can go back in time “under certain circumstances”; essentially, touching mementos connected to memories allows him to dive into the past.He intends to go back to find out who murdered his wife and ultimately save her, even if he knows it will likely be an impossible task.

The demo took place on a plane and literally every character had that special something, that strangeness only Swery characters seem to pull off. When speaking to people, three dialog options are presented which can be activated by hovering your hand over one of them or talking out loud to the Kinect microphone. Our detective got in a fistfight with one of the more eccentric passengers and gameplay took the form of quick-time prompts that required the player to swipe with their arm to punch, block, etc. It seemed fine and shouldn’t get in the way of the story, which will be the main draw from the sound of it. 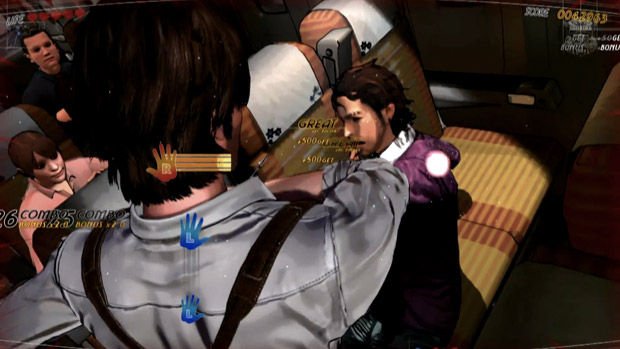 “[Swery] wants to make it episodic because he wants users to have a choice and to purchase an episode [rather than a full-priced game] and he’d like to make the game so appealing that people would be willing to pay for [every episode],” said Noma, who translated for Swery. As a result, we can expect cliffhangers and the like to keep us engaged enough to follow through.

Based on what very little was shown, this looked like an adventure title. There are no right and wrong dialog choices, it seems, but certain ones will award more points than others. There’s a scoring system in D4 — the previously described brawl had a combo meter and everything — which can be used to buy things like extra costumes.

I couldn’t get a true sense for how linear D4 will be, but at least forthe main story, players will be driven forward. That said, there will be a lot of optional side stories as well. “Depending on how you talk to these people, there will be different stories,” explained Swery.

I’m not sure how to feel about all of this, but I’m excited, the more I think about it. If you are a fan of Swery’s work, at any rate, D4 is going to be more of that. So long as he keeps making games, I’ll keep playing ’em.