A quest for the journey

Long, long ago, when the often-delayed N64 was still pre-drinking, getting ready to stagger out and embarrass itself at the console party, my younger, fangirl self was drooling over screenshots in my Nintendo Power magazines. Yet it wasn’t games like Blast Corps, Super Mario 64, or Star Wars: Shadows of the Empire that were squeezing out my saliva glands; it was Pilotwings 64. On the surface, it’s just a lighthearted flight simulator, but in my mind, an irresistible portal to freedom.

You see, even in the days when 3D wasn’t quite 3D, I was dreaming of big, endless worlds. I wanted to go beyond the invisible walls in Duke Nukem 3D. In Stunt Race FX, I’d run circles around the practice track to try and simulate traveling to the next event. Video game worlds have come a long way since the hardware restrictions of yesteryear, going from the dizzyingly gargantuan, yet monotonous world of The Elder Scrolls II: Daggerfall to the confined cityscape of Grand Theft Auto III before arriving at today’s formulaic Ubisoft-brand sandboxes. Yet, for me, it wasn’t just the freedom of bigger and bigger sandboxes that I dreamt of, it was actually the restrictions that would shackle me to them.

My interest in Pilotwings went beyond flying through rings and firing hapless daredevils our of cannons into national monuments. I was instead absorbed with landing my gyrocopter on the ground and traveling the roads and highways of its miniaturized map of the UnitedStates from the ground level. Even before those days, I was dreaming of the perfect road trip game.

Throughout my life, that never really changed, and in games like Just Cause 2, I’d meticulously drive the speed limit while touring its enormous open worlds. The appeal invariable wears out after a while, but any time a world presents me with long stretches of asphalt, it’s almost a certainty that I’ll put four wheels on it and pretend I’m on vacation.

Little did I know back in the N64 days, I’d be stuck pretending to this day. 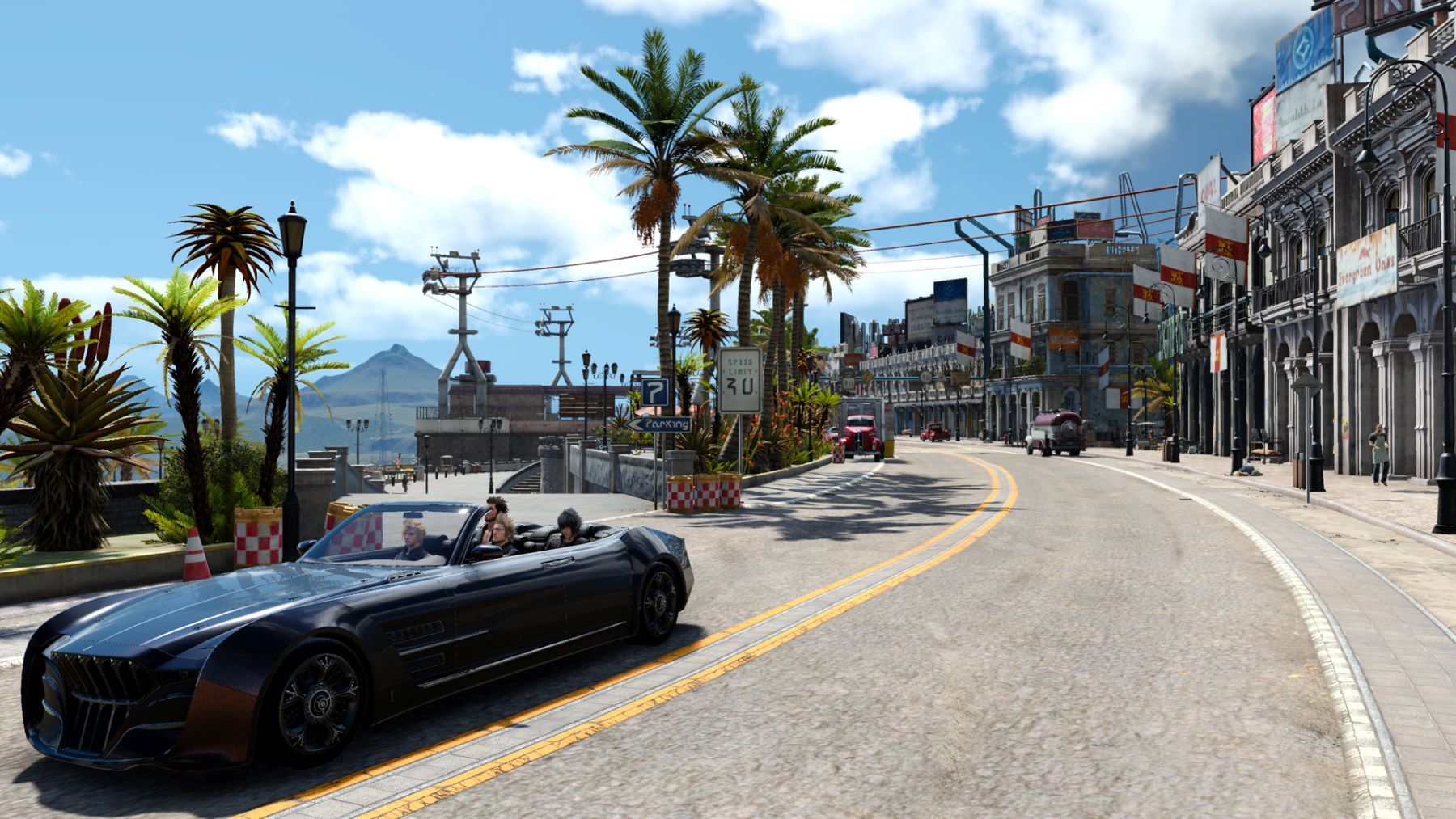 Certainly, some games require less imagination than others, but it takes more than a car and a big, open world to make a road trip game. It requires the welcoming glow of a distant gas station, the comfort found behind a familiar steering wheel while traveling on unfamiliar roads, and the promise of warm respite at the end of the day. There’s an energizing risk to the whole experience, an exciting uncertainty that nestles itself into your gut and drives you forward.

That’s something you don’t necessarily get from games like the Truck Simulator series, which has you crossing entire continents to deliver your cargo. Sure, there’s a lot of open road, but you aren’t exactly required to stop at the 7-11 for some well-deserved snacks. There’s a barrier between you and the world that makes the game meditational, but also, well, like a job.

Some recent games have looked to more directly capture the feel of the concrete cruise, including the big-budget titleFinal Fantasy XV. Hitting the road in your affluent dad’s land yacht, FFXV replaces the traditional RPG overworld with miles of open road. While battling dinosaurs at the side of the highway isn’t exactly a traditional activity on a road trip, it’s supplemented by giving you snippets of relaxing moments with your friends. Staying at hotels, eating at diners, viewing lavishly rendered food porn; there are lots of ways to stretch your legs before getting back on the road, and it all builds a warmth that brings the road trip to life.

Unfortunately, about halfway through the game, the whole open world is basically dropped in a dumpster. You’re not able to finish your road trip, because you’re literally railroaded to the game’s finale. The game’s conclusion left me feeling personally attacked like it’s saying, “Only losers enjoy digital road trips, here’s some stuff for you to fight instead.” 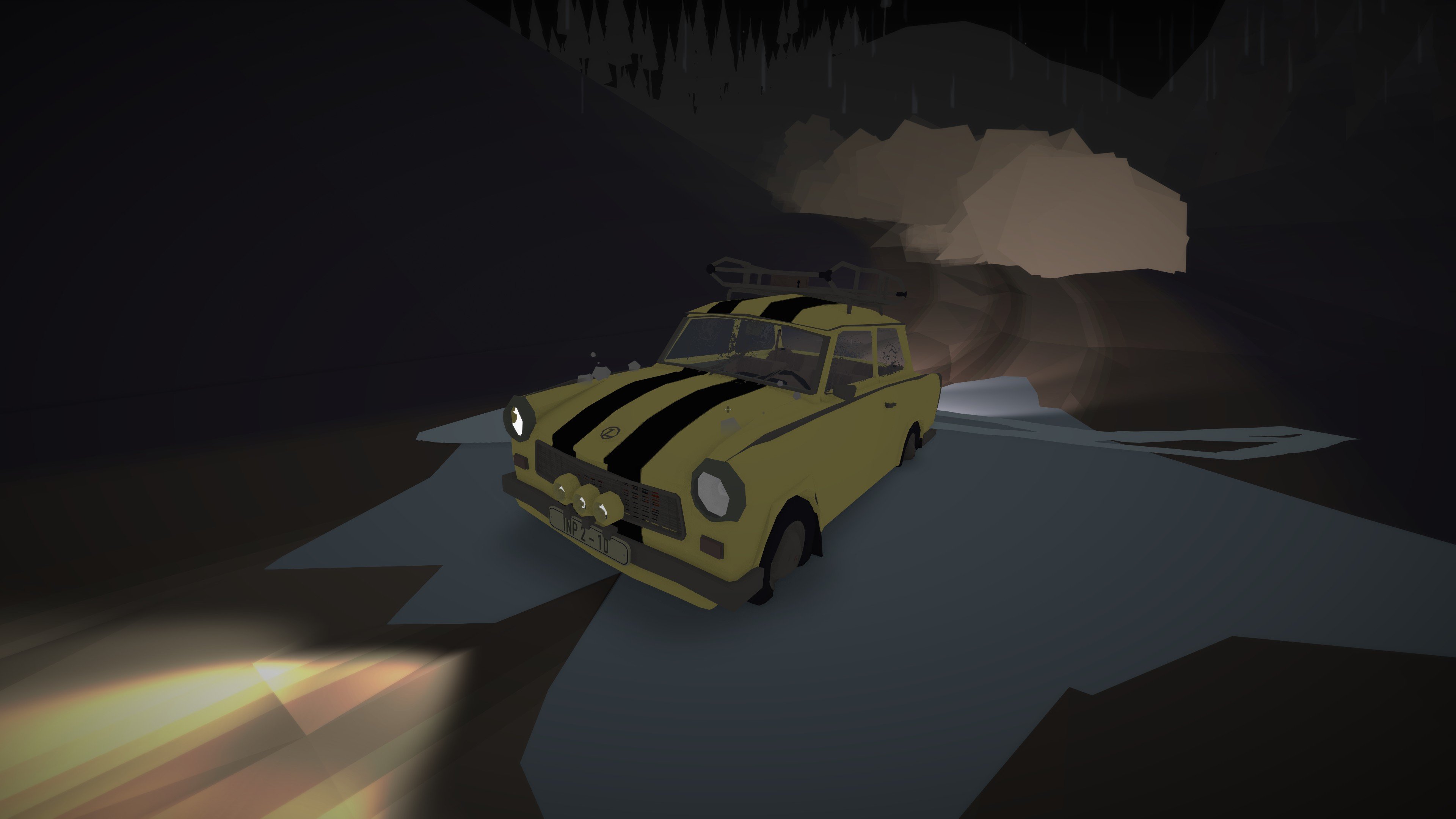 To be honest, it was actually unusual to see a big-budget game pick up such an unproven concept and make it a core part of the product. Usually, all the experimentation goes on in the indie sphere, which is why I find it strange that the first games I noticed actually adopting the road trip appeared in the same year as FFXV.

Greg Pryjmachuk, a former Codemasters dev turned indie, was the first to read from my private diary. He created Jalopy, a game about traveling with your uncle across Eastern Europe from behind the wheel of your horrible, two-stroke heap of metal. It may sound like the most direct manifestation of my wishes, and to its credit, being a road trip game does seem to be its central intent. However, while you travel across multiple countries worth of highways and backroads, the world feels a little empty.

The Laika, your car, is fully featured and has a lot of interactivity in it, straight down to the wear of certain parts that require upgrades and replacement if you ever hope to reach the end of your trip. Outside of your automobile, however, you only ever really interact with motel and shop clerks. The streets are deserted, and there are no real side activities aside from collecting boxes on the side of the road. There’s just not a lot to really draw you in and make you feel welcome. 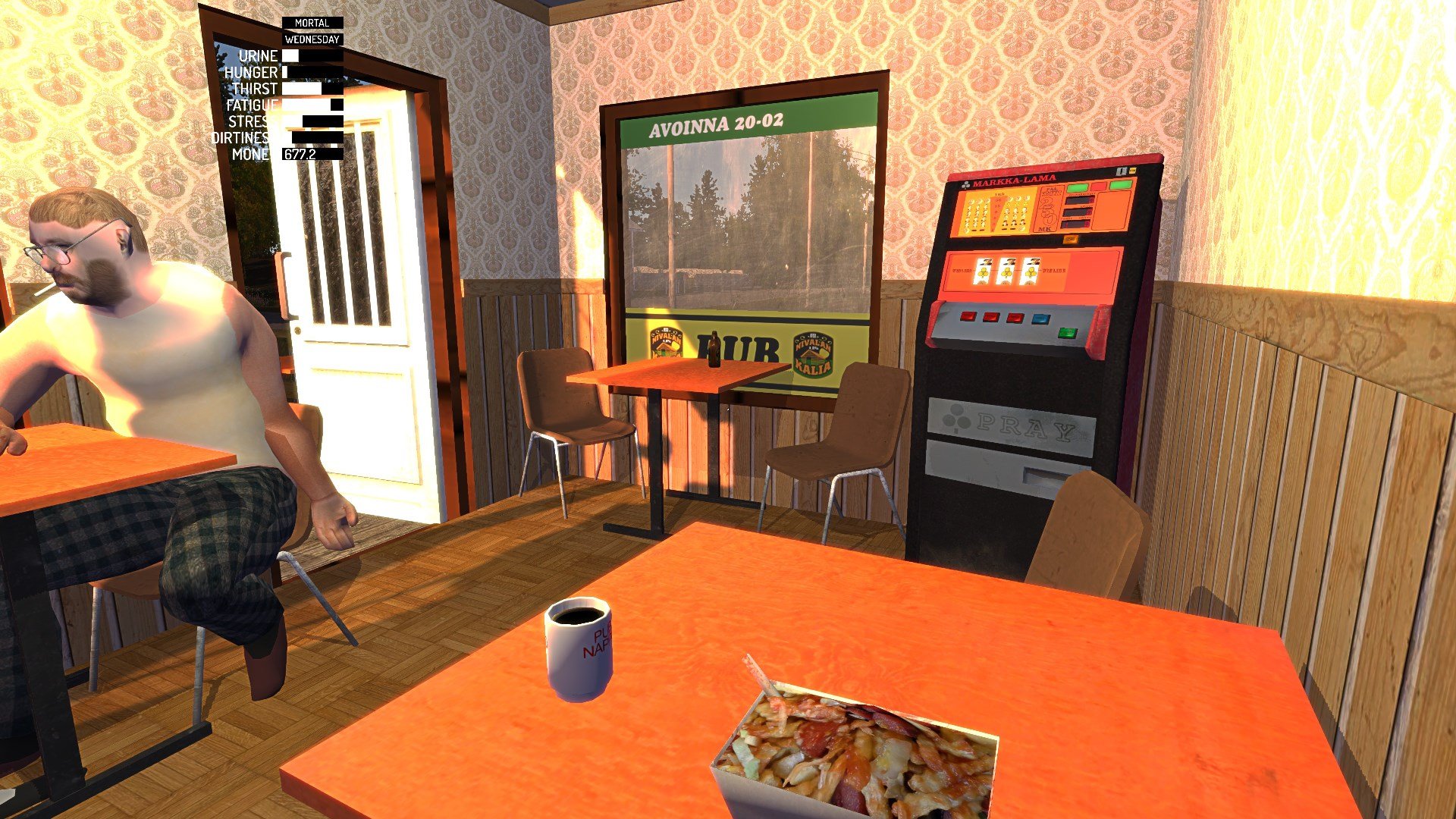 My Summer Car goes in an entirely different direction. Going north of Jalopy’s locale, My Summer Car takes you to rural Finland and asks only that you survive life in its bizarre depiction of the countryside. It’s not a true road trip game, as you never leave the thirteen square kilometers of rural terrain, but its focus on driving and vast distances you have to travel make it feel like it.

Not only that, but it draws you into the world through mundane tasks. You need to eat, sleep, drink, piss, and manage your stress. The ways of doing so are vast, and you’ll often find yourself peeing in the car radiator and drinking vast quantities of booze to try and keep yourself functioning. The game is still in Early Access on Steam, so its main objective is still up in the air, if there ever will be one in the end. You’re essentially left to meticulously piece together an old heap of a coupe, and otherwise left to your own devices.

Picking up drunk friends in the early morning, gambling with a hoof-footed gentleman, or simply sitting in the bar because you arrived in town too late to buy gas; it’s a monumentally unfriendly game that focuses on mundanity, but the way it draws you into its bizarre depiction of Finland is nothing short of perfect. If only those roads went somewhere. 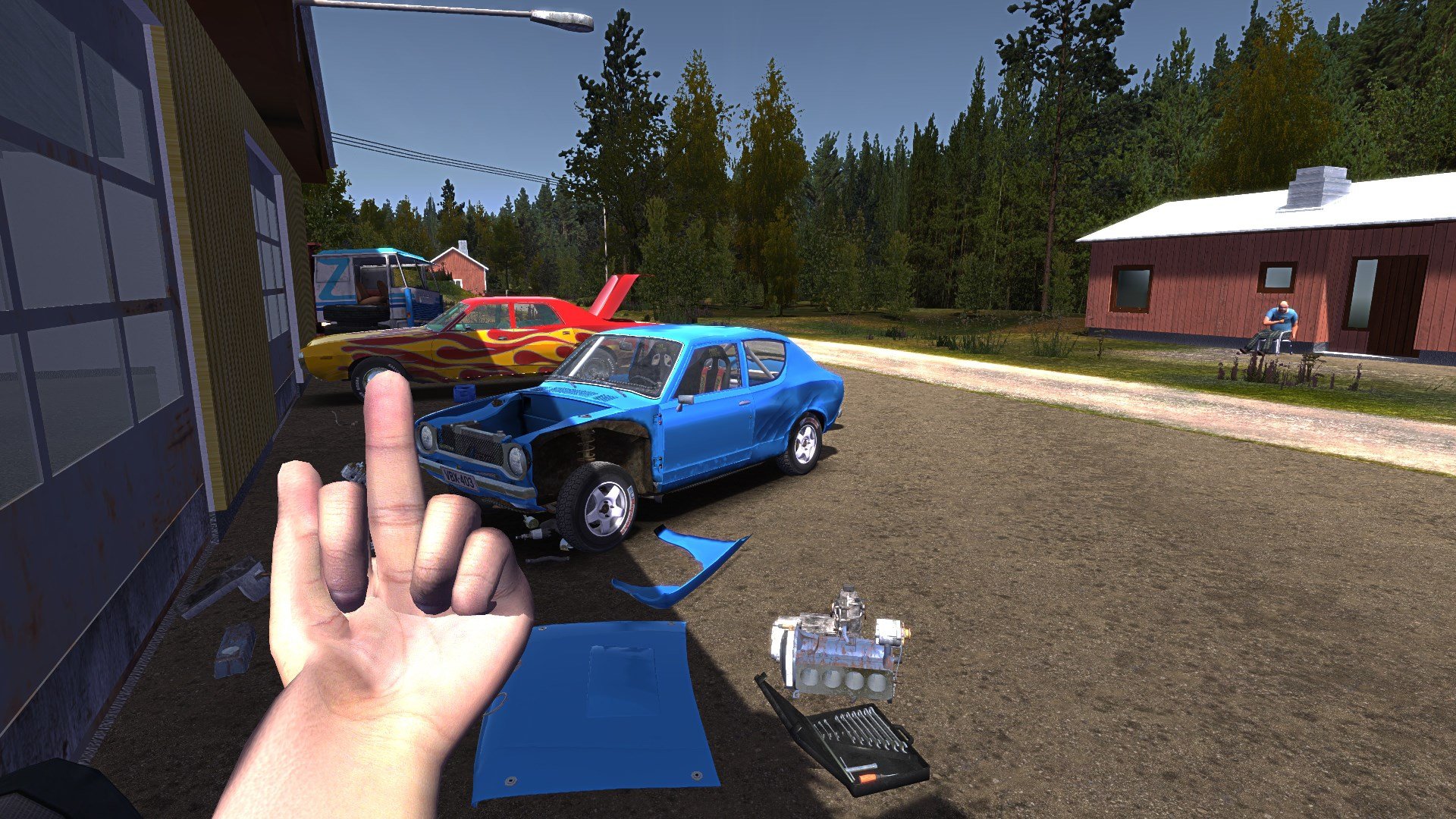 If you’re wondering why I don’t just jump into a car and travel until I run out of gas money, the truth is I don’t drive. I once attempted it, but somewhere in my mind is an unexplained fear of road travel. Even being a passenger can be a stressful experience for me.

I honestly can’t explain my fascination with the activity, since it predates any experience I had with it. It might be because of the isolation I felt growing up in rural Ontario, rarely traveling any distance to an urban center. Deprivation can lead to romanticizing if you see what I mean. Eventually, I’d experience life on the road as my family would occasionally make the traditional Canadian migration to Florida. The excitement of waking up in a new place and stepping out into the morning to rejoin the other motorists is a feeling I still carry with me.

That’s the feeling I want to be able to revisit in a digital format, and it’s what I’ve been seeking for years. It’s not enough to have a big, open environment to drive around in, like what you’d find in The Crew or Forza Horizon. I’m looking for the risk, the reward, the energizing confusion of a journey through unfamiliar territory. I want the pressure of driving in traffic, and the comfort of reaching safety. It would be nice if I had the option to unwind when driving becomes tiresome or simply take on the sights.

There are games that come close, but it’s like having someone scratch your back. You try to guide them to that itchy spot, but they’re never quite able to find it. They may hit its margins, but for some reason, they never find the sweet spot. So, until someone finally gets that itch, I’m left pretending there’s a reason for all my mileage. Maybe, one day, someone will finally give me a destination.