[Bardley shows us some great examples of changed games and vaporware back when game news would only arrive once a month for most people. Your favorite Kickstarter may send you an email to your phone when they have an important update but back then, you’d have to wait for weeks before finding out a game was cancelled! Got your own personal histories to elaborate on? Write a blog! ~Striderhoang]

I confess that I don’t have many memories of video game magazines as a kid. Though I loved my Nintendo 64 and was obsessed with Pokémon, I never subscribed to Nintendo Power, despite finding those 1-year subscription offers packaged with every game back then. If I was ever stuck in a game, I usually asked friends for advice or soldiered on through it.

Yet, in recent years, I have grown more interested in older video game magazines, back before the Internet was widely used and when walkthroughs and trailers were basically nonexistent. Around the time Nintendo Power shut down, I heard so many people telling stories about their experiences with gaming magazines and I was curious to see what I had missed. I had seen various pages from Nintendo Power issues and loved the bombastic ’90s style, complete with crazy fonts and outdated lingo.

There was a game store in my home town that used pages from Nintendo Power issues as wallpaper. While as a collector it was disheartening to see so many early issues cut up, I sometimes spent more time there looking at the walls than looking for games. It felt like walking through a museum, as game previews from the late ’80s to early 2000s were up there in a wild, nostalgic collage.

So in recent months, I decided to pick up some issues of Nintendo Power that I might have read if I had subscribed when I was a child. I bought a bundle from the mid to late ’90s from eBay and started flipping through the pages.

The most interesting thing about looking back at these old issues was the benefit of hindsight. While the writers speculated on sequels and other hyped games thatwouldn’tbe released for years, I knew what the finished product looked like. Previews often showed beta versions of games or unconfirmed titles, shedding some light on the design history behind some of my favorite games. Also, it was fascinating looking at previews for games which were eventually cancelled, some of which have been leaked to the public over the years in a playable format.

So, for this monthly musing, I thought it would be fun to share some of the cancelled and modified games featured in issues of Nintendo Power that never made it to the public, at least in a completed form. 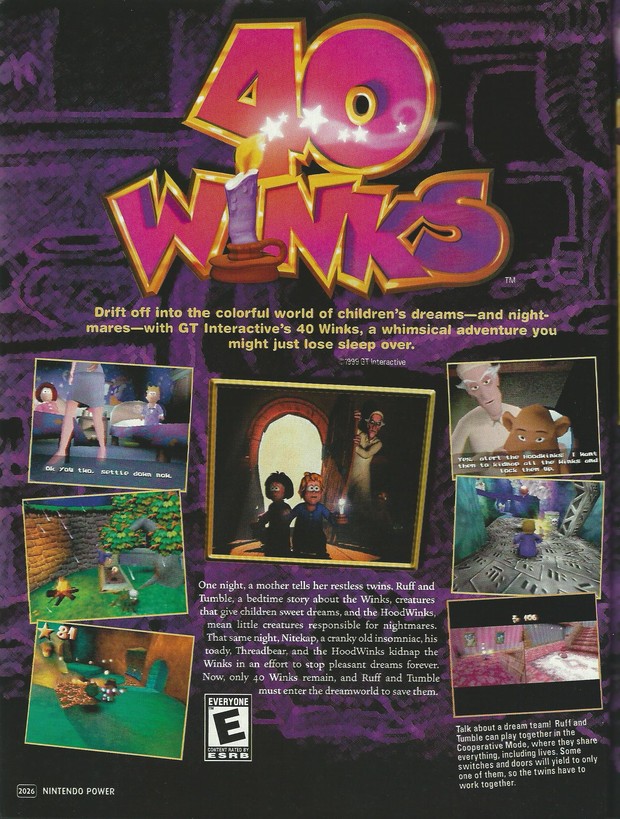 First off, we have a game called40 Winks, a kid-friendly 3D platformer from GT Interactive. As a big fan of the genre, I was surprised that I had never heard of this game. 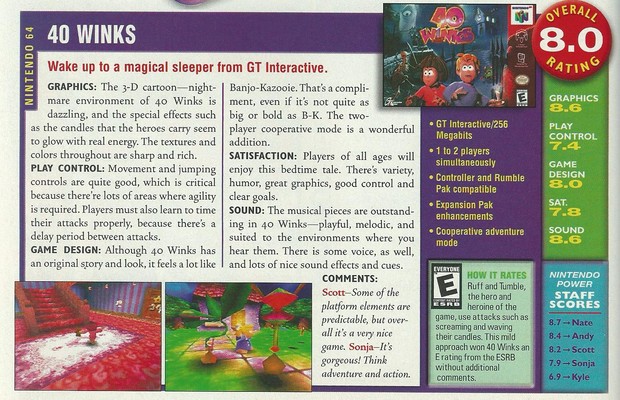 I assumed that I had simply overlooked it in the past, as there was a detailed walkthrough of the early stages of the game and even a review at the end of the issue. Yet, as it turns out, the game was cancelled late into development. However, a PlayStation version of the game was released. 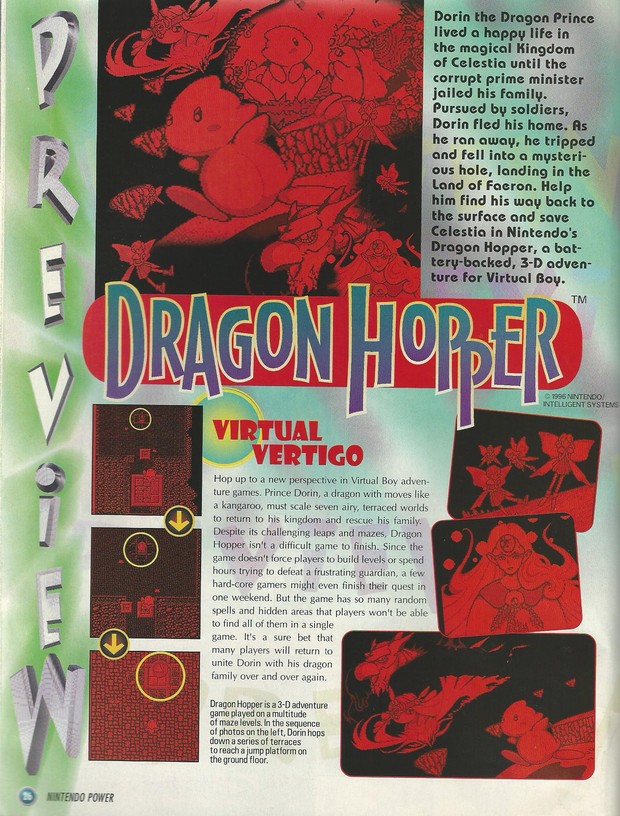 In the earlier issues I read through, there was quite a bit of hype for the Virtual Boy, with a good amount of space dedicated to the new system. Even as the system limped into 1996, there were still a series of previews for new games, ones that would be cancelled before release. Here we haveDragon Hopper, an adventure/platformer developed by Intelligent Systems, who createdFire EmblemandAdvance Wars. Considering the pedigree of the developer,Dragon Hoppersounds like a fun game and potentially one of the system’s best. 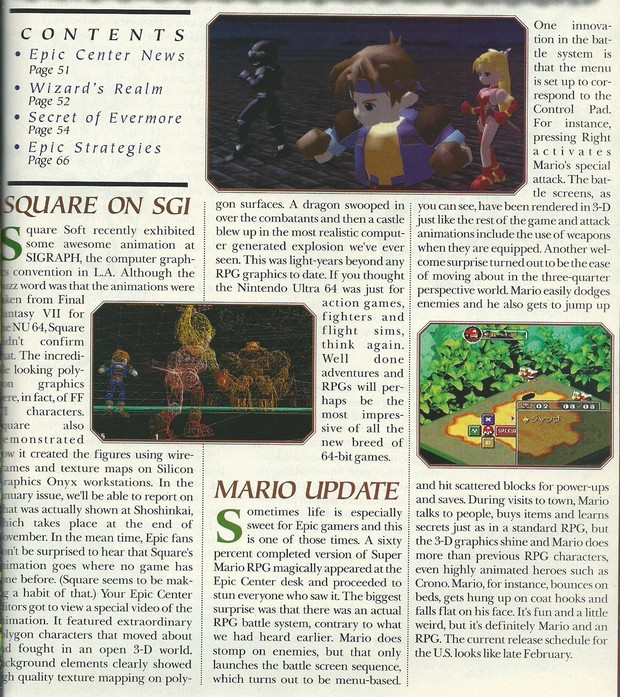 This segment details a then-recent tech demo from Square for the transition ofFinal Fantasyinto 3D. Though the demo mentioned here featured characters fromFinal Fantasy VI, it presented what the next game could look like. In hindsight, it is so strange thinking thatFinal Fantasy VIIcould have been a game for the Nintendo 64, or Ultra 64 as it was then known. ConsideringFinal Fantasywas such a juggernaut franchise at the time, what would things look like today if Square had remained with Nintendo? 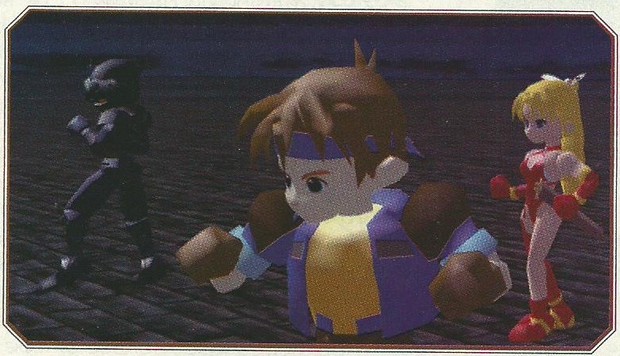 The hands are decidedly less blocky than in the finished game. 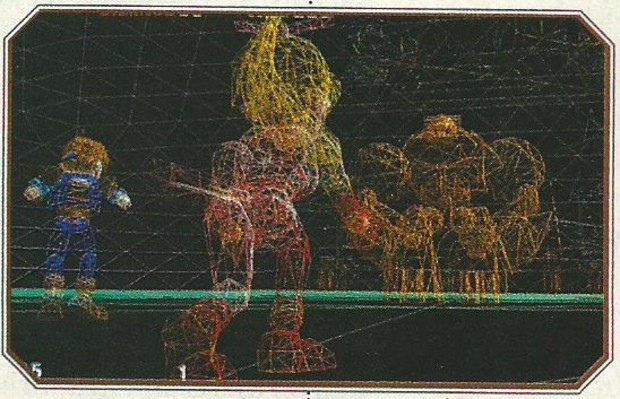 GoldenEye 007was originally developed for the Super Nintendo, intended as a companion game released alongside the film in 1995. However, itdidn’treach store shelves until two years later on a different system altogether. As an article mentions, the original SNES version utilized the same rendering technology asDonkey Kong Country. 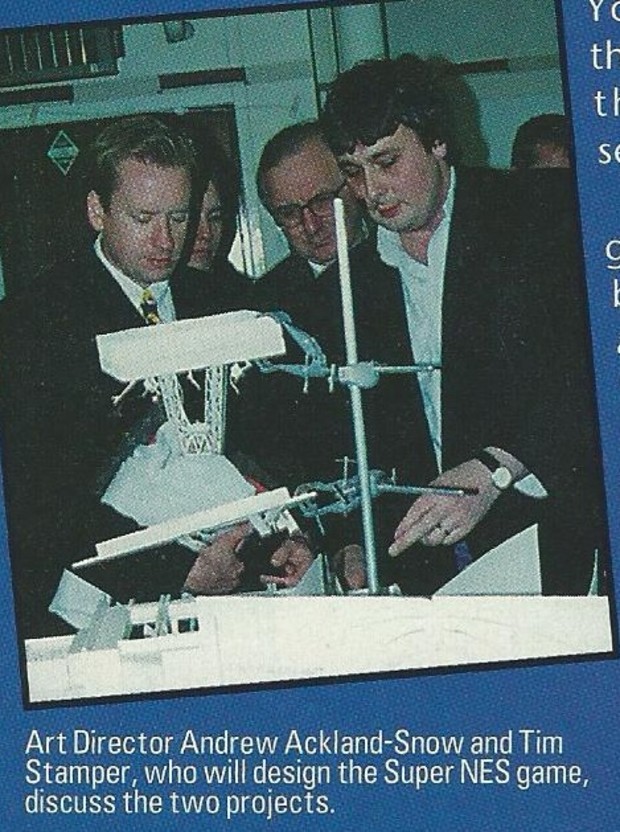 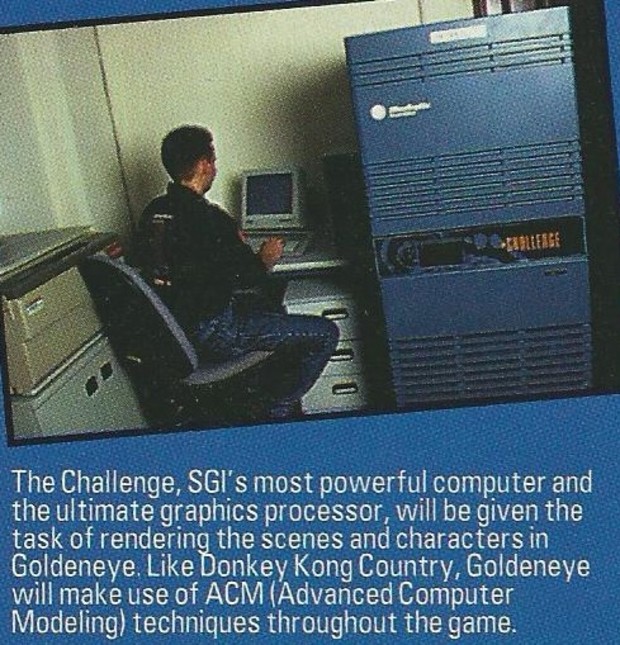 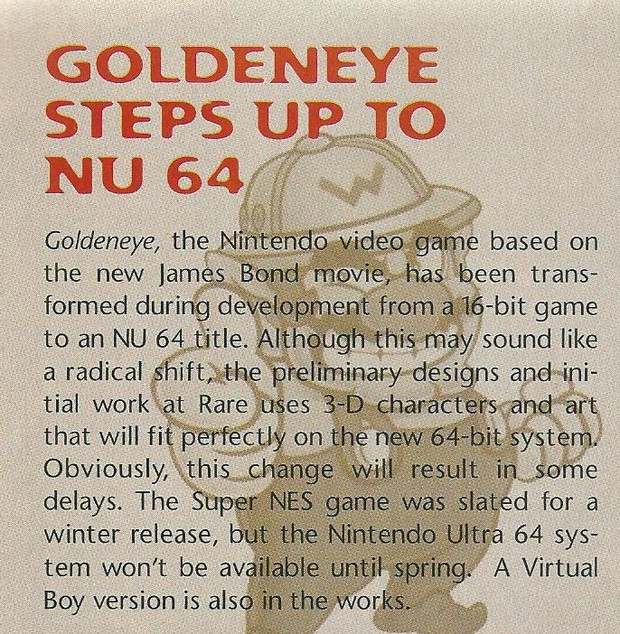 Yet, as this blurb mentions,GoldenEye 007shifted in development to the Nintendo 64, or NU 64. This version of the game was supposed to be released in the spring of 1996. Interestingly enough, a Virtual Boy version of the game was in development as well. Though Rare is notoriously secretive about its games, it would be interesting to see what the SNES or Virtual Boy versions looked like. 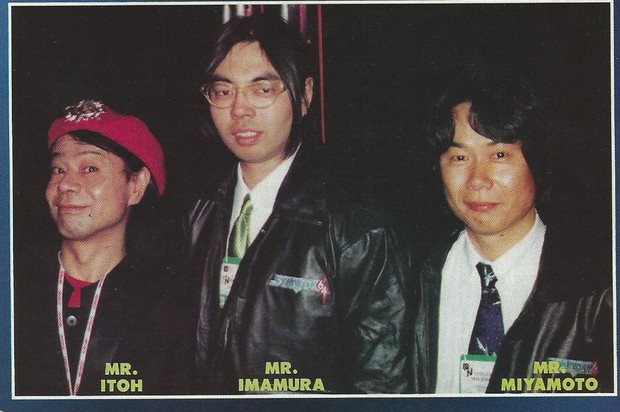 I also found an interesting article covering E3 1997, which included interviews with Shigesato Itoi (named as Itoh in the magazine), Shigeru Miyamoto, and Takaya Imamura. While the majority of the article covered new and upcoming releases such asGoldenEye,Banjo-Kazooie, andSuper Mario 64, the interviews offered interesting tidbits about the development process of some cancelled and redesigned games.

Much of the interview dealt with the Nintendo Disk Drive, a disc add-on to the N64 which was scheduled to be released in 1998. At the time, a host of games were in development for the add-on, includingOcarina of TimeandMother 3. However, only a handful of games were ever released for the system.

SimCityand a series ofMario Artistgames were eventually released for the N64 Disk Drive, but the last two games here piqued my curiosity. I know thatMother 3had a long, troubled development cycle, going from the Super Famicom to the Nintendo 64 DD to the GameCube before eventually being released on the Game Boy Advance. However, thePocket Monsters/Pokémongame is a bit more mysterious.

While mentioning the success ofPokémonoverseas, Miyamoto casually mentions that a Pokémon RPG was being planned for the N64. While a series ofPokémongames were released for the system, none were RPGs. While a console RPG was mentioned, such a game has not yet been made. Also, while the firstPokémongame on N64 wasPokémon Stadium, Iwouldn’texactly call it “an encyclopedia of monsters.” Did the game change during development?

Now, I have never playedMother 3or any game in the series, but I found this segment fascinating. It sounds as though the developers had a lot of ideas for the new game, at a scale that may not have been possible at the time. From this interview, it sounded as though multiple endings and customizable characters were planned for the game. I’m not sure if these ideas were being intently developed at the time, or if Itoi was merelyspit ballingideas.

To conclude the interview, Miyamoto mentions two games that never reached the public, at least in the format he mentions here.Super Mario RPG 64, also known asSuper Mario RPG 2, was a spiritual successor toSuper Mario RPGbecause Square, the original developer, was not involved. Eventually, this game was released asPaper Mario.

As a huge fan ofSuper Mario 64, rumors about a direct sequel have interested me for years. This game had one of the longest and most secretive development cycles in all of video games, mentioned by Miyamoto for nearly a decade across three console generations. Miyamoto later said that the game, which eventually came to be known asSuper Mario 128, had its elements incorporated into other games such asPikminandSuper Mario Galaxy. Still, I would love to see a playable demo of the N64 version.

Next, we have a game that Ididn’tknow existed until I happened upon the article in Nintendo Power recently. I know thatResident Evil Zerois a GameCube game, butdidn’tknow that it had its roots on the Nintendo 64. From the start, the game was Nintendo exclusive. The N64 version appears to have the same story and framework as that of the final release. However, the game’s size necessitated a release on the GameCube. 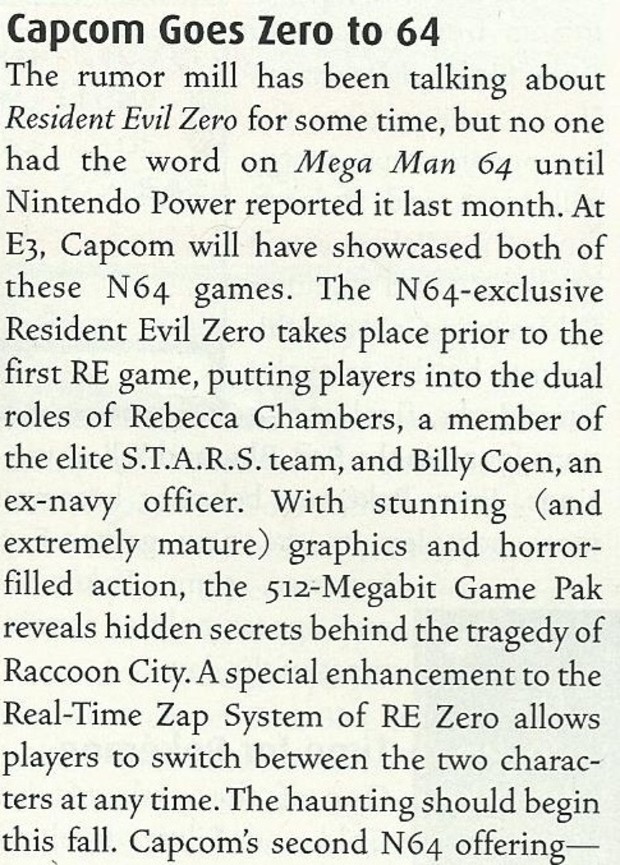 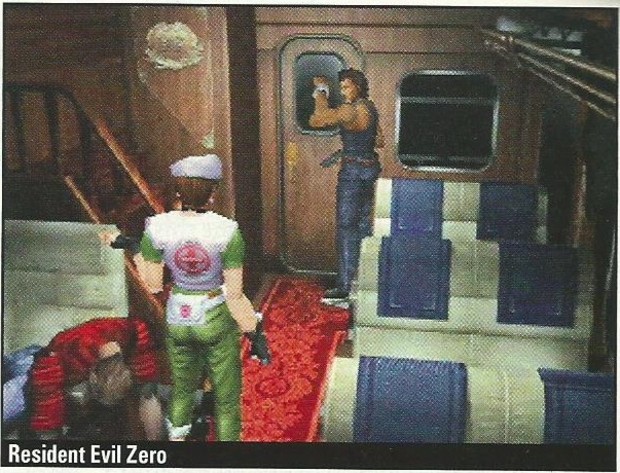 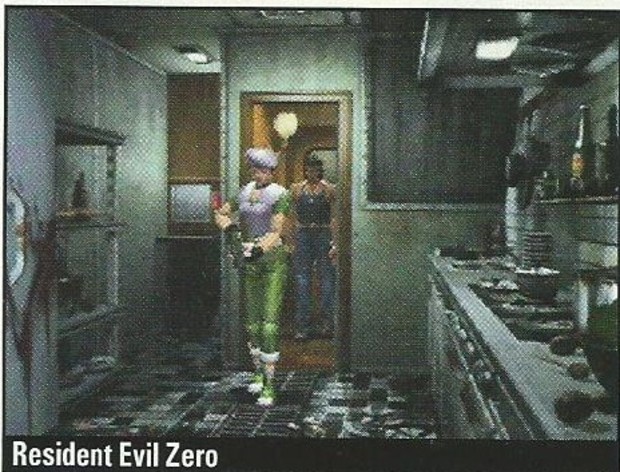 Lastly, let’s turn to two additional Rareware games that were heavily modified before their final releases. The first game was a 3D platformer which would eventually be released asConker’s Bad Fur Day. For a good chunk of development, the game was a lighthearted, kid-friendly platformer that was being developed concurrently withBanjo-Kazooie. 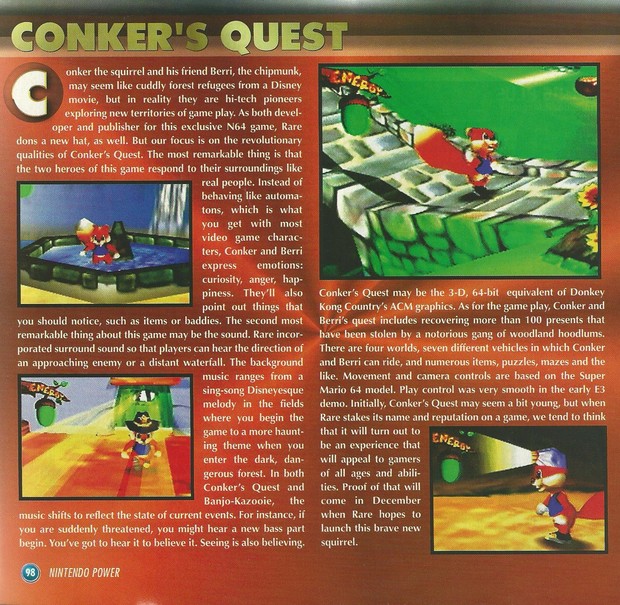 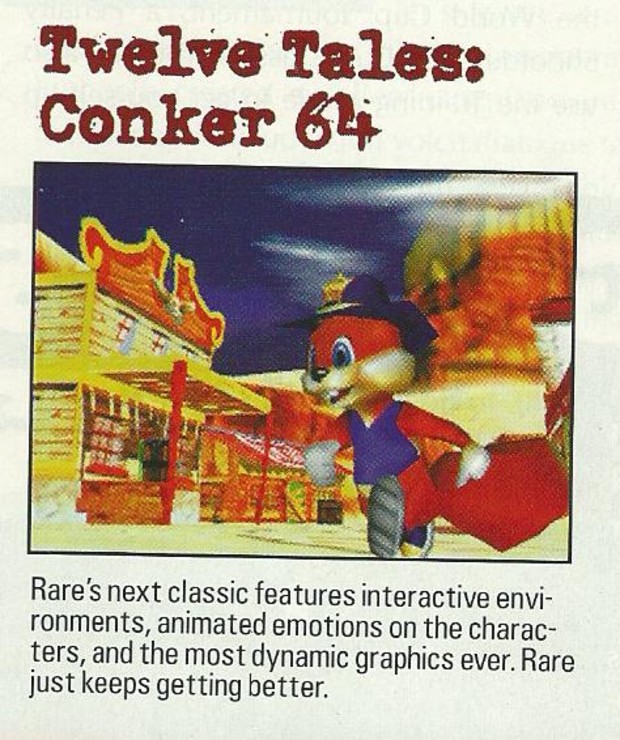 Partway through development, the title was changed toTwelve Tales: Conker 64. It looked to have a hub world and series of levels based on various storybook themes. As you might expect, the game was never mentioned in Nintendo Power once it became the mature-rated, comedic game it was eventually released as. 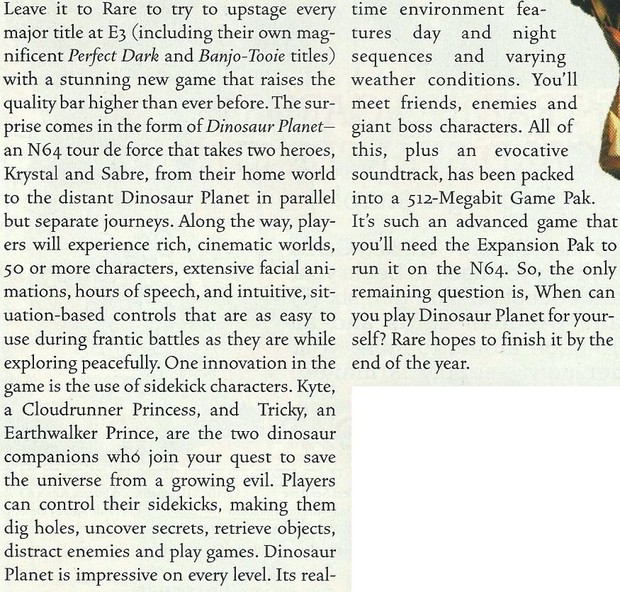 The second game from Rare is an adventure title calledDinosaur Planet. It involved two heroes named Krystal and Sabre who fight to save the universe from a foe unspecified here. While Rare hoped to finish the game by the end of 2000, development was delayed when the original idea became a Star Fox game. Sabre became Fox and the game was released two years later asStar Fox Adventures. I have never played the game, but recognize some of the names mentioned here. Characters such as Krystal and Tricky were kept in the final form of the game relatively intact, it seems. Still, I wish the original version of this game had been released for the Nintendo 64. As the article mentions, the game was one of the biggest for the Nintendo 64 and would have been only the third game to require the Expansion Pak, afterDonkey Kong 64andThe Legend of Zelda: Majora’s Mask. 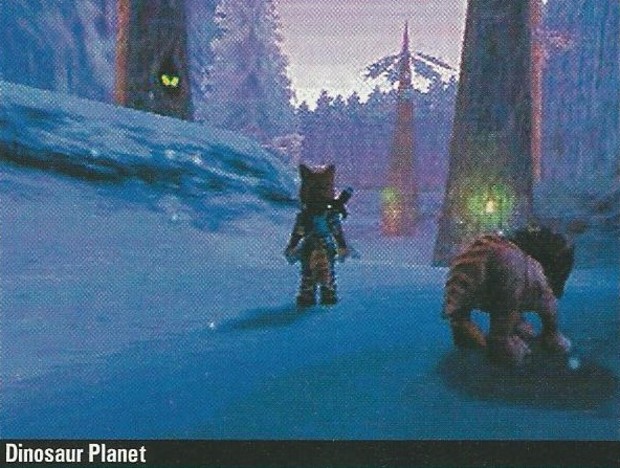 While it is fun looking back at the games we know and love, I think it is just as interesting to look back at the games thatdidn’tquite make it, at least in the form we recognize. For every game that makes it to release, there are many that don’t make it out of the planning or design stage. One reason why I enjoy looking at beta versions of games is that it offers something brand new about a gameI’veplayed and enjoyed since childhood. Even after all these years, there is still something new to discover.