First, let’s take a moment to really appreciate my tequila sub header. It’s the little details that count. That’s what D4: Dark Dreams Don’t Die is all about. Sure, when a catgirl is doing karate in your face it’s easy to think subtlety has gone out the window, but then watch David piling and piling breadcrumbs in his chowdah over the course of an entire cutscene or sit down to brush up on obscure Stanley Cup trivia.

D4 is the same bizarre adventure, point and click style adventure game on PC. Detective David Young lost his wife and his memories, but gained the ability to “dive” back in time through items of, uhm, substantial memorial value. And there’s weird Americana and avant garde fashionistas bedding mannequins and who the hell knows, it’s great.

You can find Chris’ original review of the Xbox One release here. 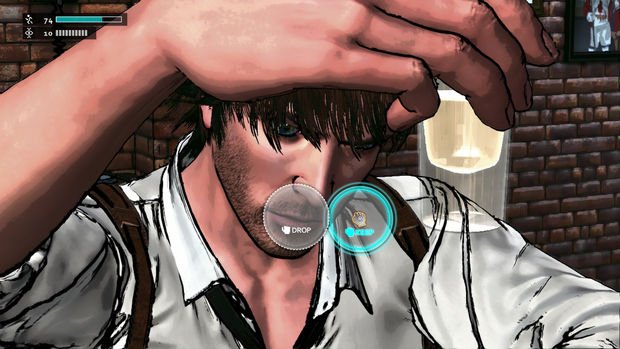 D4 isn’t a robust PC port, but it’s functional. There were two instances of models (once a full character, once a tie) kind of spazzing out and shaking for a bit; I had a crash trying to bow out to the main menu between episodes; and things aren’t crazy cleaned up from the Xbox One release, but the port is a fine option and not any kind of messy downgrade from the original.

It’s clear a lot of work went into adapting usable mouse controls (replacing the stripped out Kinect controls), UI, and so on. Not that it needs much else. Xbox One DLC is packed in with a “free shirt” section of the store that hilariously gave me a Gears of War tee right off the bat. Buying clothes is very important for no reason. Nice to see a game with different outfits in this day and age. There’s some new DLC if you’re into that sort of thing.

The controls are the big thing, though. Chris was sure it was better without Kinect when he played it, but I do feel there is something missing, oddly enough. Never thought I’d be going to bat for the Kinect. I also never used Kinect controls for longer than 30 minutes at a time, so maybe that would drag after a while. It’s just that some of the mouse swipes, especially when your cursor is at the opposite end of where you’re being prompted to begin swiping across, don’t quite have that same tactile connection. It feels like flailing more than literal arm waving.

Clicking, pushing, grabbing — those all work, maybe even better with point-and-click precision. But then I sort of miss those dramatic, painterly slashes across the screen. Particularly during big action sequences, but also for the rote swipe-to-do-somethings, like opening doors. And the middle mouse button to look around felt finicky to me, but that may have something to do with my broken finger. Mouse versus Kinect versus controller, it’s mostly preference.

The best thing about mouse controls is pure one-handed play, leaving the other hand free to sip some tequila.