Preview: Castle Story has me stacking bricks for hours

The closest you’ll come to playing with LEGO bricks today

When I first saw the adorable Castle Story at PAX East earlier this year, it immediately grabbed my attention. Its simplistic brick stacking and mining are very enjoyable and addicting, and the animations are a joy to watch.

The game is out now on Steam Early Access, and I have had a chance to dive into it some more to check out the survival and sandbox modes. There is multiplayer available in this build, but I haven’t had a chance to play around with it yet since it requires you to manually connect to another user’s IP at this point. It’s still a little rough around the edges, but the core gameplay is good enough to have me hooked.

The goal of Castle Story is to build a castle. Depending on the game mode, this castle will be for your creative pleasure, or for defense. The player guides Bricktrons, the yellow protagonists, to mine materials and to build fortifications. In the Sandbox game mode, you can just build as much as you want without having to worry about anything bad happening, and in Survival mode evil Rocktrons come out in waves to destroy everything you love.

Sandbox mode is fun, good way to get the hang of the mechanics, but Survival mode is where I tend to have the most fun. Every few minutes a wave of Rocktrons spawns at the edges of the map and rushes towards your Blue Crystal, which is the heart of your castle. The Blue Crystal is how you spawn more units, and if it’s destroyed you lose the game.

To defend the Crystal, you’ll want to build a castle around it to keep out the Rocktrons for as many rounds as you can. You can also spawn warriors and archers to fight them off. To get more units, you have to collect blue crystals from mining to bring to your central Blue Crystal.

This is a simple economy that actually works out pretty well. You need to have workers to harvest stones, wood, and crystals and to keep your castle and units growing. Each round of attackers has more Rocktrons, so after playing for an hour or so things can start to get crazy. You have to constantly build and repair broken walls, and mine to expand your army and workers.

The player doesn’t really take direct control of the Bricktrons like in most real-time strategy games. Instead, the player sets up tasks and then assigns units to them. So if you want to chop down trees for wood, you have to establish a wood-harvesting task near some trees and then assign some Bricktrons to it. Once on a task, the Bricktrons will take care of moving the goods around and will keep working until they either run out of things to harvest or don’t have anywhere empty to put the materials. 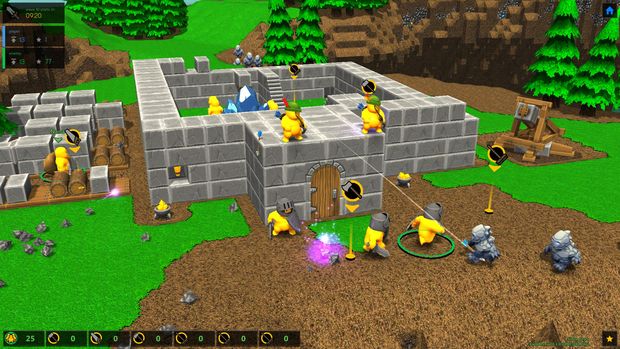 This system is controlled by a contextual radial menu that might seem a little foreign to some players at first, but once you get the hang of it it’s an easy and fast way to control the game. It hides any options that don’t apply to what you are clicking on and it’s always intuitive to figure out how to do what you want.

Building a castle works by laying out a blueprint of what you want first. A blue transparent outline will show you where you want your builders to place bricks, stairs, doors, and arches. There is a limited number of parts available to you, but it’s still possible to make a very cool castle from this selection. Once you have the plans laid out, the Bricktrons assigned to the construction task will carry blocks from stockpiles and start stacking them in place.

The units move at a relaxed pace, which makes the game calm overall. It doesn’t require the fast decisions of other strategy games, and it feels much more like a city builder with its speed and pacing. It’s the perfect type of game if you enjoy watching little people carry out your bidding. The animations are fun to watch if they work right, but since the game is in beta that’s not always the case. 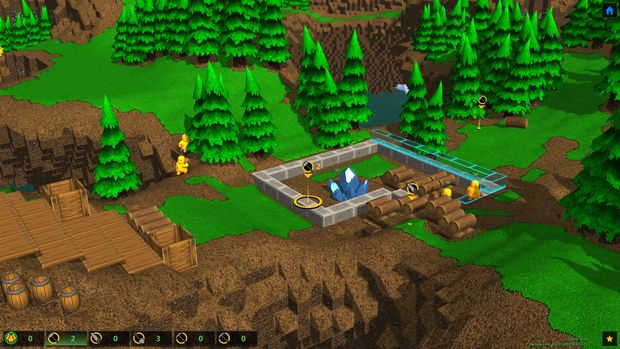 While I really like Castle Story so far, it is still in beta as an Early Access title. Sauropod Studio did recently have a patch after the game hit Steam, but there is still a lot of polish and bug fixing needed to really make this game shine. It’s a smaller studio, and the development is slower than some people in the Steam forums would like, but progress is being made.

I have lost save games, I have had Bricktrons wander off to their deaths, I have had them get stuck staring at a wall, and I have seen them just not behaving in any way they should. The AI is a little wonky at times, and while this can lead to some very entertaining antics, it can break the game.

As it is right now, it’s a good concept that some people will really enjoy despite the bugs and lack of polish. Other people might not want to spend twenty bucks on a title that isn’t completely ready, but that’s an overall problem with anything you buy when it’s on Early Access. I’ve played about seven hours of the build on Steam, and it works well enough for me to enjoy playing. 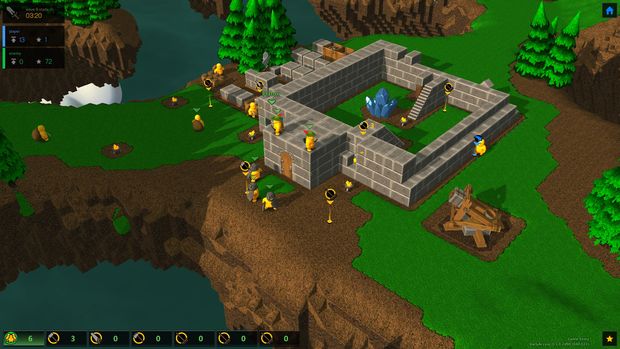 This is still a work in progress, and down the road there will be more polish and fewer bugs, and a world builder to let players construct their own levels. There also might be more materials and units, but nothing has been confirmed about that yet.

If you decide to buy the game this early, you are essentially helping them fund the continuing development. It’s better than backing most Kickstarters — you will immediately get a functioning build of the game to play — but it’s not the same as buying a finished product. I really like Castle Story, and I think fans of games like Stronghold or Settlers will also enjoy it — but just be aware that it’s unfinished.