Truth be told, I’ve never beaten Okami. I’ve played it twice over in the past, first on the Nintendo Wii and got about halfway through the game, around that same time though, I got a PlayStation 3 and simply never found myself returning to finish it. Then with the PlayStation Network release in 2012, the same result ensued; I got about halfway through it and ended up getting distracted by another game altogether, never finding myself coming back to it. 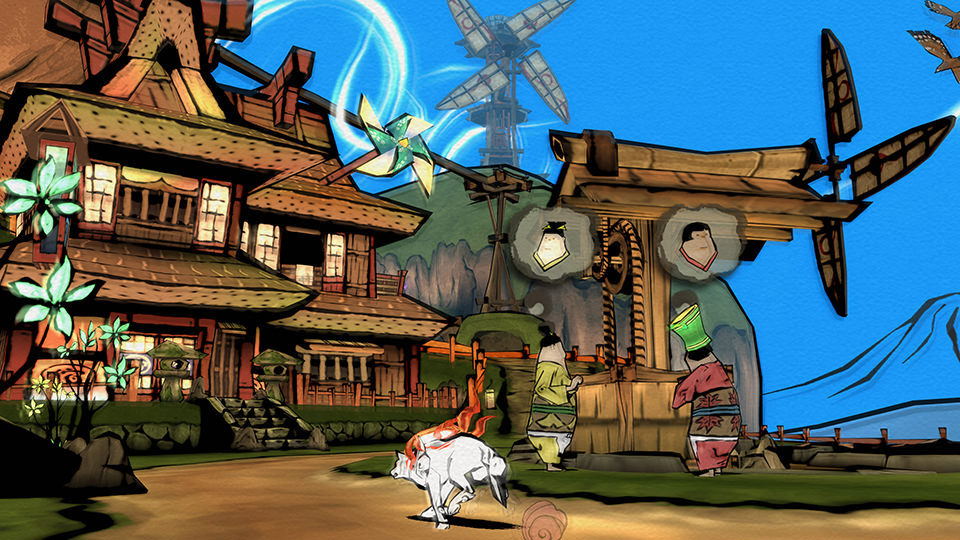 With the massive critical acclaim Okami has garnered over the years, I feel pretty guilty about never actually having beaten the game. Thankfully, now I have no excuses. But, if there is still one major takeaway I’ve had in my roughly eight hours or so of playing the game so far on PC, it’s how gorgeous this game still looks, considering it was originally released on the PlayStation 2.

Okami HD is another example of how a game with a distinct art style will always look better in the long run, than a game simply attempting realism, because in terms of graphical prowess, there will always be something more “realistic” within a couple of years. Meanwhile, Okami‘s cel-shaded art style still looks incredible and holds the test of time, an art style that utilizes thick black outlines and is heavily inspired by Japanese water coloring and woodcarving techniques known as Ukiyo-e. 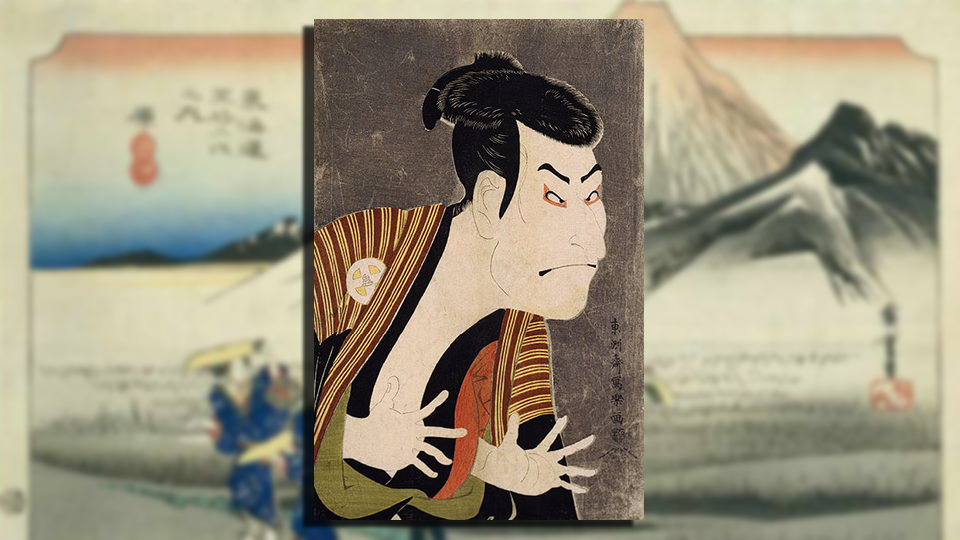 Mind you, all of this in an HD resolution certainly helps, playing Okami again all these years later in a native 1080p resolution really showcases what I mentioned above. This particular release of the game also supports a 4K resolution on PC, PlayStation 4 Pro, and Xbox One X. So, if you’re lucky enough to have a 4K monitor or TV setup, then you can’t go wrong with having Okami HD being a showpiece.

Although, I am a bit disappointed the framerate on this now third re-release of the game, over a decade later no less, is still locked at 30 FPS. Capcom had this to say regarding the choice to lock the framerate:

“We actually experimented with 60FPS and uncapped frame rate mode, but unfortunately it breaks the game logic, collision detection, and animation speed in certain areas of the game. The reality is that it would take a Herculean effort, time, and cost to manually fix and QA by trial and error since we’re working with legacy code from PlayStation 3 that was originally intended with 30FPS in mind.” 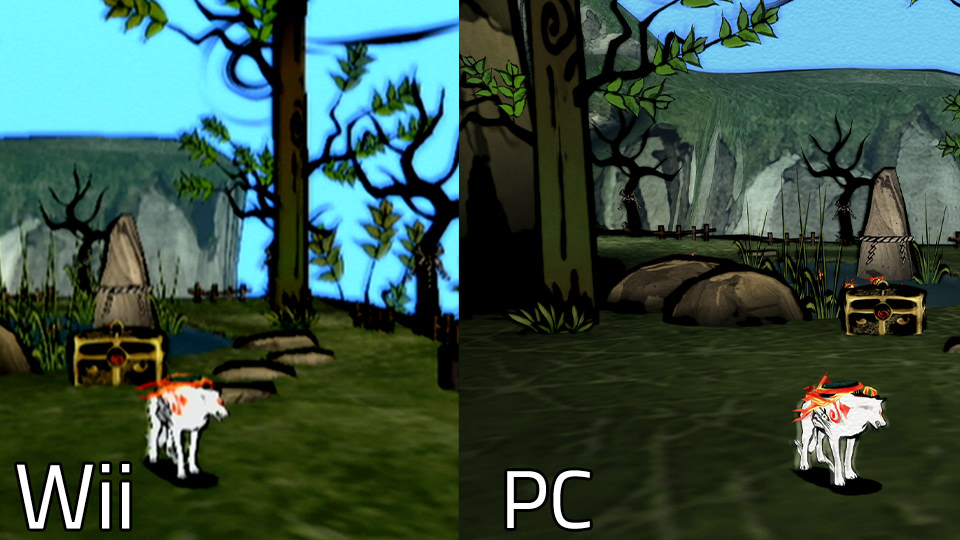 As for the PC version in particular, I am also a bit disappointed in terms of the amount of graphical customization at your disposal. There is no specific options for basic things such as anti-aliasing or draw distance (the game still has loads of pop-in issues, even on the highest settings), it all just boils down to a tab labeled “Graphics Settings” — with the only options being: low, medium, and high. Chances are, what you’ll be getting on PC on the highest setting, is going to be no different than what you’re getting on current consoles. Which is to be expected for an 11 year old game, but the lack of deeper graphical settings may disappoint PC enthusiasts none the less.

Notably, I also couldn’t seem to get my PlayStation 4 controller working on the PC release of the game, either natively, or with third party software, despite my controller working fine on other games and ended up just sticking with the mouse and keyboard. Which at first, I dreaded the thought of, but the moment I was able to use the Celestial Brush with the mouse, it immediately felt natural and instantly became my proffered method — even over the Wii Remote and PlayStation Move motion controls. 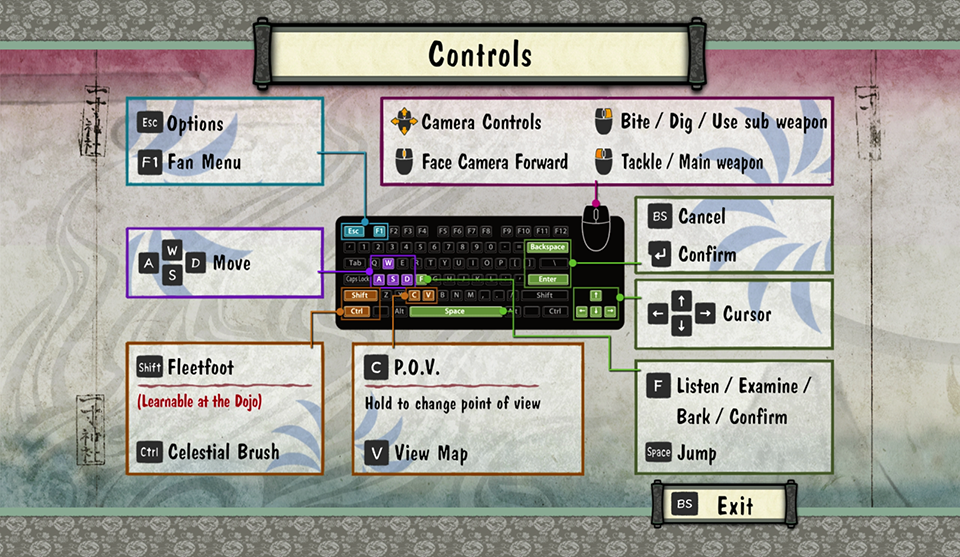 That said, I’m not exactly crazy about the default key-mappings, such as “Backspace” being utilized as the cancel option, thankfully you can still re-map keys. Using both the right and left mouse buttons for combat also took me a few moments to adjust, but soon afterwards, felt natural as well. Notably, all the in-game menus of the game also don’t support the mouse, so you’ll have to navigate them with the keyboard.

Aside from this, after playing the PC version for a short time, I genuinely think the PC controls are my new preferred way of playing Okami overall, simply for how well the Celestial Brush translates to the mouse and how natural it feels to use. Okami HD‘s PC port does come off feeling rather lazy overall, especially when compared to other Capcom releases on PC, take for example Dragon’s Dogma: Dark Arisen, which had a host of graphical options for its PC release last year.

But, if more re-releases of Hideki Kamiya’s masterpiece on other platforms potentially lead to a proper sequel one day (yes, I know Okamiden was a thing) — then I’m all for it. For those of you curious about my full opinion on the game overall though, then stay tuned as I continue my journey into collecting all 13 Celestial Brush techniques and beating the game for my full review. (Expect a video review as well!)