Not quite the market leader

Game capture devices have gotten easier and easier to use with each passing year. What once was an elite craft is now easily accessible with the right unit, as it’s as simple as plug-and-play functionality. Recently I had the chance to test out the Elgato HD — a device that I now use on a weekly basis for all my recording needs.

So how does theRoxio Game Capture HD Pro compare? Well, it works as advertised for the most part, but it’s a bit of a downgrade. 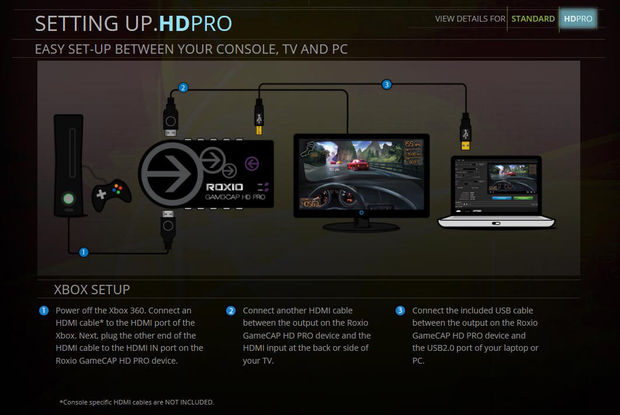 Aesthetically, the Roxio HD Pro is unflattering with tons of connections popping out of it, and the top is busy with logos and icons. It’s very lightweight however, and easy to transport, which is a plus. But what really matters here is the functionality, and the good news is that it’s very easy to use. The Roxio is simple to hook up and run with, and either capture video directly (720p, 1080/60i or 1080/30p with HDMI or component support), or stream to Twitch. SD resolutions are supported, but there is no directcomposite support — so no legacy devices.

My tests with the Xbox 360 and PS3 in particular were practically flawless. All you need to do is connect a console to the Game Capture HD Pro, run a cable to your TV, attach the USB cable to a PC (it’s bus-powered, so you’ll need to have it attached at all times), and you’re pretty much good to go. The software will pop up a tiny view window for the captured console, and from there, you basically just press record, or set a finite record time — at which point, the video will record in your selected format and render itself in the folder of your choice (with anh.264 encoder). It only comes with the USB cable, so you need another HDMI cable to handle the video out — not a big deal, but it’s kind of annoying all the same. 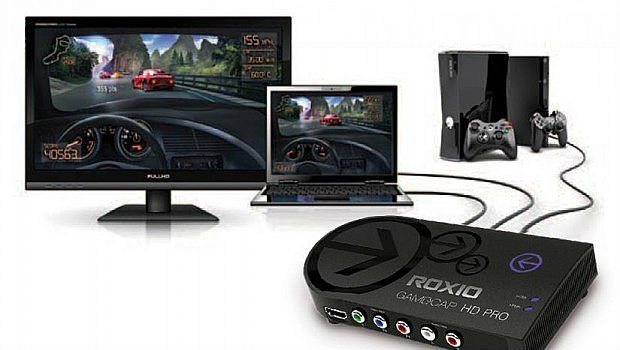 What is a big deal is thatthe unit doesn’t come with the appropriate PS3 cable, which you’ll need since Sony’s console doesn’t support direct HDMI capture (and is limited to 1080i at that). Whereas the Elgatodoes include the special PlayStation 3 hookup in its package, you’re basically left on your own to order it and configure your console properly with the Roxio. Just like the Xbox 360, the Wii U is plug and play.

So how does it hold up on the newest consoles? The Xbox One is supported, but the Roxio is a bit janky on it at the moment. Evidently, the software will lock you out of recording “protected content” if you’ve watched certain videos on it within a given time period. In order to fix the issue you have to restart your console at least once, then re-run the software and hook the unit back up. At that point, it shouldwork, but it still locked me out roughly 50% of the time.

The PS4 however, doesn’t support any form of video capture, so the Roxio (or any other unit) isn’t going to help you out there. I reached out to a representative to see if this will ever be a possibility, and they noted that Sony will “eventually” update the firmware to allow capturing — but there’s no timetable in sight. In short, your options are limited for the brand new generation. 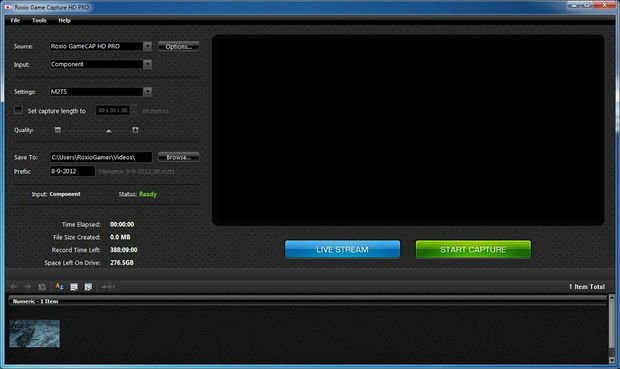 The software is where the Roxio is a step up, as it offers up a few more options than its competitors, complete with a decently packed editing suite. After installing it with a CD key, all the typical extras are here, including audio and mic support, as well as the ability to encode and convert videos into a number of formats with Videowave.

Voice mod support, captions, and other animations (including 90 transitions) are at your fingertips, keeping this a cut above a simple “copy and paste” tool. The encoding rate also caps out at15Mbps, whereas the Elgato tops at 30. As a side note,FFSplit doesn’t work with the Roxio, whereas XSplit does if you have the premium version.

All in all I’d still recommend the Elgato Game Capture HD over the Roxio. It’s easier to use, it sports a sleeker design, it comes with a PS3 cable, and the software is much simpler. Roxio does boast a better in-house editing suite, but you’d be better off with a superior third-party piece of software anyway if you really care about video.