The last time we saw Rock Band VR, the best summary of the experience was a simple “Well, it’s Rock Band, but in VR.” Six months later, that’s no longer the case. Not even close, actually. Harmonix has completely reworked the game, to the point where the guitar and the headset are the only things the two versions have in common.

This new take on Rock Band VRtrades the series’ signature note highway for something more creatively interpretive. Remember the freestyle solos in Rock Band 4? They’re the guitar parts that favored playing stylistically instead of playing technically. Rather than giving the player a challenging set of notes that perfectly follow the song, the freestyle solos basically just asked that something good-sounding be played.

That idea is the core of Rock Band VR. The entire game is one big freestyle solo.

The way it works is that the neck of the in-game guitar lights up a vague chord shape. For instance, if two dots are illuminated with a space between them, you should strum either green-yellow, red-blue, or yellow-orange. If it’s two dots next to one another, any combination of two buttons next to one another will work.

But it’s not as if the game throws a rapid succession of dot prompts. There’s always a lengthy break between them, allowing you to constantly strum to the beat, changing chords but keeping the shape. Eventually the next part of the song will come along and a new set of dots will guide you. 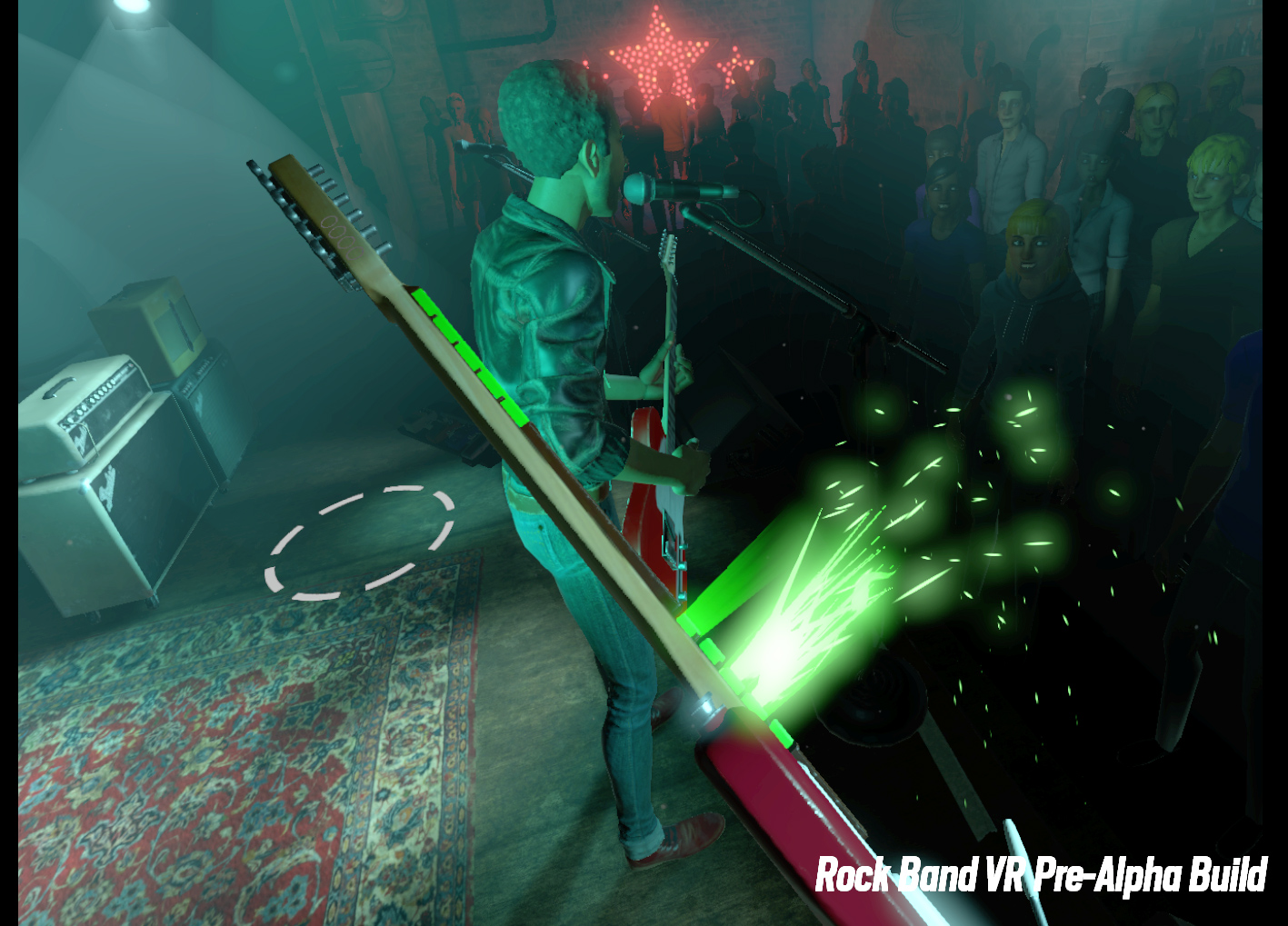 Rock Band VR‘s Overdrive system similarly favors style. When it’s activated, more points are earned by striking poses. Getting on a knee and shredding to the crowd, or putting the axe behind your head are some ways to earn extra points and extend the length of Overdrive. We’re told that there are a whole bunch of different poses to discover.

This is a completely different take on Rock Band, and it’s not one that strikes a chord (ha!) with me. It strips away the feedback loop of doing something impressive and exchanges it for just kind of being there. It’s sort of neat being in a virtual rock club, but I certainly didn’t feel any accomplishment playing Rock Band VR. As a player who chases gold stars and full combos, this game just felt like a lot of strumming until the song was over.

Contrary to my initial impressions, several Harmonix representatives insisted that Rock Band VRis also for the competitive player. Each song has a set of missions that award extra points. They seem to mostly be for things like playing a certain part of the song similar to how it actually goes. There wasn’t a star system after the track was over, so I’m not sure where performance is actually judged. Maybe it just hasn’t been implemented yet.

But, whether or not Rock Band VRhas systems to entice the competitive player seems like kind of a moot point. The heart of it is too entrenched in non-structure to entice anyone who’s after perfection. The tech is undeniably impressive, but this just isn’t what I want from a rhythm game. Rock Band VR lives up to the franchise expectations of making you feel like you’re in a band, but not of making you feel like you’re excelling at being in a band.