The French Revolution, though a fascinating period of history, is hardly renown for its hearty alliances and political friendships, with a chunk of the crooked, and not-so-crooked aristocracy and monarchy doing whatever it takes to keep their head above water, lest it be removed from their affluent shoulders.

I’ve always thought that the grim machinations of that time-period would make a great setting for a good game. This desire wasn’t exactly sated by the wreck-faced monstrosities of Ubisoft’s Assassin’s Creed’s Unity, which nailed certain aesthetics but missed the point entirely. However, all is not lost. I may finally get the opportunity to fulfill my somewhat niche fantasy of being a beautiful-but-conniving 18th century femme fatale, courtesy of Ambition: A Minuet in Power, now crowdfunding on Kickstarter. 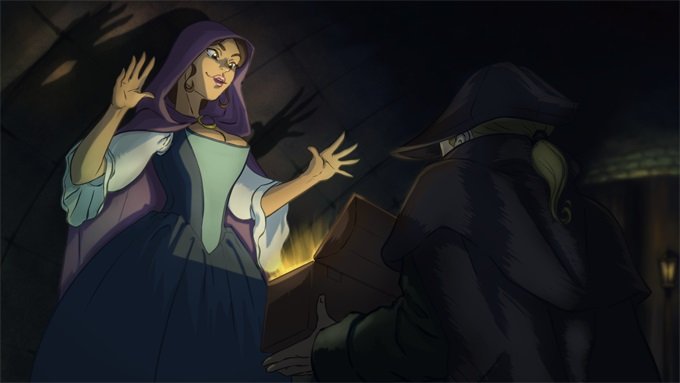 Ambition is being put together by San Francisco outfit Joy Manufacturing Co. and appears to be a combination of story-driven gameplay, dating sim, and resource-management title, while also including elements of procedural-generation. In Ambition, you play as the Yvette Decaux, a young woman whose beauty is matched only by her avarice. Set during the times of pre-revolutionary France, the player’s goal is to guide Yvette to the opulent lifestyle she believes she deserves. By any means necessary.

Using psychological manipulation, sweet seduction, and a carefully spun web of secrets and lies, Yvette will attempt to secure her role within the approaching political upheaval. Using her wits, her ruthlessness, and her wardrobe, Yvette will charm and carouse friends and suitors alike, securing herself safe passage to the top of the aristocracy. Success could see her become a powerful and feared figurehead. Failure could see her head in a basket.

The game will use a variety of mechanics, including dialogue options, clothing choices, and relationship decisions to allow the player to build, or destroy, Yvette’s social network (she don’t need no stinkin’ Instagram). This can be done by deciding who to befriend or snub, what to wear and where to be seen, who to court, and when to callously discard them. Basically, to constantly adapt to the given political and social situation in order to keep Yvette atop of the affluence food chain.

Not alone in her quest to grab the brass ring, Yvette can call upon a trio of associates. Maurice the Tailor can provide her with the finest garments for her parties, showing off her, erm… assets for knuckle-headed nobles, or keeping here pure and angelic for religious types. Hansel the Bodyguard is a little more hands-on, as in, hands-on-the-throats of anyone foolish enough to bar our heroine’s progress. Finally, Therese the Spymaster can be used to uncover information about others, which can be used to further maneuver Yvette toward or against them. Think of it as the 1785 equivalent of checking someone’s Facebook profile before a date.

Ambition is one of those titles that sounds like a clever and delightfully sly adventure in concept, but this will, ultimately, come down to its execution (no pun intended), and whether the developers can make the flow-chart of choice accurately come together for the finale. Joy Manufacturing Co. has also said that the game will change every time you play, with events and characters switching around on each playthrough, requiring fresh scheming. 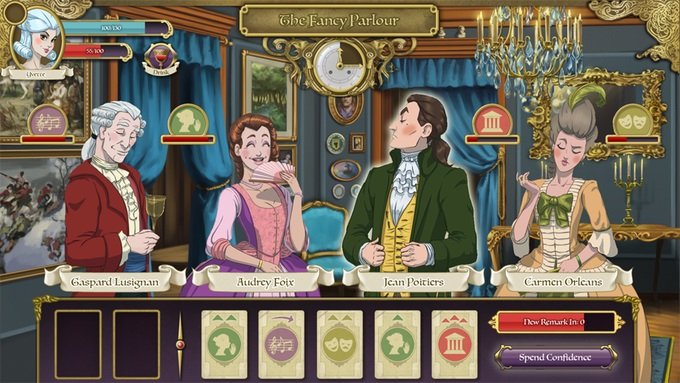 Ambition: A Minuet in Power is currently crowdfunding on Kickstarter, where it has reached half of its goal. It is an all-or-nothing affair, with the game only going ahead should the team hit their $45,000 total. I hope they do, because this is my only chance of looking amazing in one of those 18th century ballgowns as I’m ever gonna get.

Will you take Yvette DeCaux to the top of the aristocracy? To the forefront of the revolution? Or will the crowds bay for her blood, as the guillotine falls on her hedonistic desires?

Ambition: A Minuet in Power [Kickstarter]