Sega hosting survey in order to gauge interest about Yakuza: Kiwami 2, Fist of the North Star

Were you excited by the announcement of Yakuza: Kiwami 2 and that sick-looking Fist of the North Star game on August 26? Do you know someone who was interested in them? Are you looking for a way to express interest to Sega that you would throw money at them for those games besides screaming on social media and buying a dozen copies of Yakuza Kiwami and Yakuza 6?

Well luckily for you, Sega has the answer in the form of a four-question survey.

The survey is extremely simple compared to many others of its kind. It’s just four questions, and no personal information is required. The questions ask if you had heard of any of the three games involved before taking the survey, and individual questions for how interested you are in Yakuza: Kiwami 2, Yakuza Online, and Hokuto ga Gotoku. You can see the exact contents of the survey below. 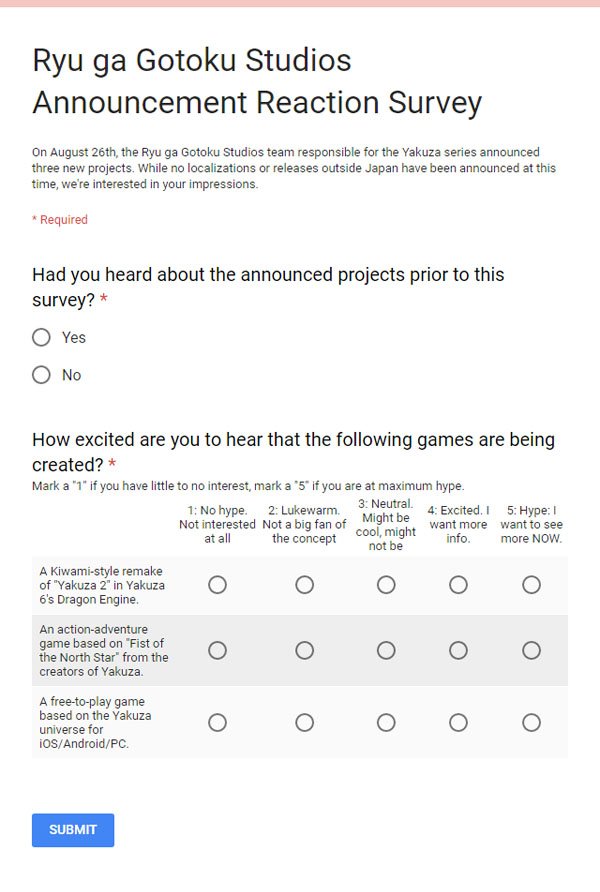 Remember, if you, or someone you know, is interested in these games, vote on the survey. The survey is for Sega to judge how much interest there is before localizing them. Everyone wins by getting more games out of Japan, and it potentially encourages Sega to take more risks down the road. Hell, when was the last time we had a decent Fist of the North Star game? It takes next to no time to vote, so if you have any interest at all, or want to help bring the games over for someone else, show your support. It’s also not clear when the survey ends so get your votes in as soon as possible.

You can find the survey here.