It’s bad enough dying a humiliating death at the hands of some random orc, but “Azdush the Dung Collector?” Really? He couldn’t have been “Azdush the Shield Breaker” or “Azdush the Invincible?”

I could have taken a bit of consolation dying to someone with a straight-up badass name like that. But The Dung Collector? I knew I’d never live it down, and his constant taunting certainly made sure of that.

Like a bad penny, Azdush the Dung Collector kept coming back at the worst times. I’d be in the middle of fighting two other orc captains when he’d wander up full of piss and nerve and try to horn in on the fight. Or I’d be chasing down an orc fleeing the battlefield and bump into him, forcing me to choose between sweet satisfying revenge on the fresh-and-ready-for-a-fight Azdush, or finishing off my already weakened prey. He kept worming out of my grip and I kept shaking my fist at him and swearing “next time!”

Eventually, as I cleared out the higher ranks of the orc power structure, he was promoted to one of the freshly vacant Warchief positions. Good for you buddy. I sent him a customary death threat as congratulations. 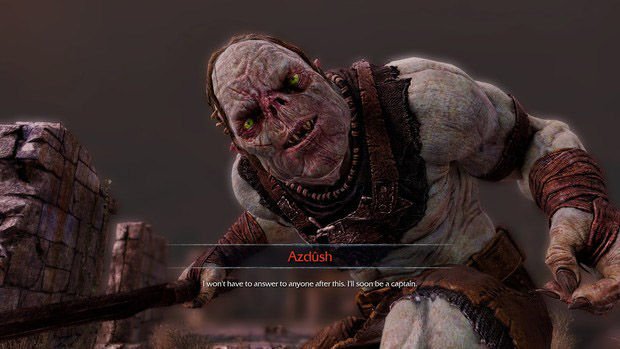 I started filling in the little details in my mind, unconsciously creating a back story for my one-time murderer. Azdush’s sudden and unexpected rise to power shocked everyone. His bizarre fascination with scat had made him an outcast even among the orcs, but a lucky swing propelled him from a nobody to a major player overnight. Azdush was living out a classic underdog story, like The Mighty Ducks! But with more skull-crushing and bloodletting than Emilio Estevez would probably have been comfortable with (probably).

I was tickled by the idea that this vile, filthy dude, who literally picks up poop and keeps it, was able to ride my coattails into the upper echelons of orc society. I pictured other orcs reconsidering their stance on dung-collection as a hobby — “Sure it’s nasty, but look how it’s working out for Azdush!” — setting off an unhygienic and utterly ineffective trend among low-ranking but ambitious orcs. I was still mad that he, you know, killed me, but I also vaguely proud of him. Look at you go, Azdush!

I couldn’t bring myself to kill him. Even after I ruthlessly turned his bodyguards into my pawns and had them poised to assassinate him at my command. For better or worse, he was my pet monster — a disgusting, pig-nosed, foul braggart who reveled in taking cheap shots, and was scared shitless (ironically) by Caragors. I made him, and even though I kind of hated him, I couldn’t bring myself to end him. It must be the same way Batman feels every time he has the Joker dangling off of a building.

Azdush the Dung Collector finally gave me the next-generation experience I’ve been waiting for. 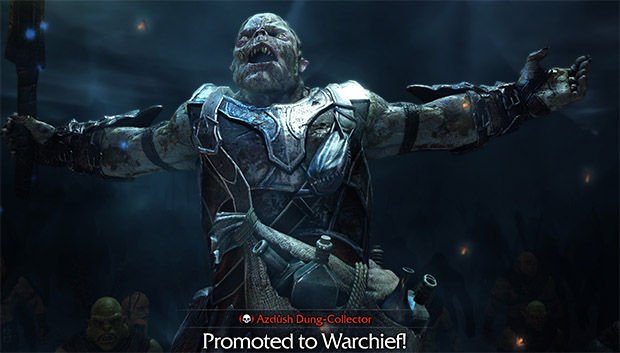 The Xbox One and PS4 have been out for almost a year now, and so far we’ve seen a lot of sequels of established franchises that are being released across all platforms (limiting how far the new systems can push them), and plenty of HD remasters of last-gen games. It’s not all that surprising, new consoles generally need a year or two before the games start to showcase their full potential, but still, it has been a little disappointing.

We’ve all waited so long for these systems it feels like we should be seeing new and exciting things, not just prettier versions of games we’ve played before. Even new IPs that were developed specifically to lead on the new consoles, like Titanfall, have cleaved closely to established formulas. I think it’s reductive and snarky to call Titanfall “CoD with robots and jetpacks” but not entirely inaccurate either.

To be honest, I didn’t pay much attention to Mordor as it was being developed and hyped because it also looked like more of the same. An ArkhamsCreedgame set in the Lord of the Ringsuniverse. A neat idea that I could definitely see the appeal of, but not something I would consider groundbreaking, nothing I was hungry to tear into.

But I was wrong, VERY WRONG! Thanks to its Nemesis system, Shadow of Mordoris the first game I’ve played that really feels like it’s pushing into what these new consoles are capable of and where games could be going in the near future, and that has me EXCITED. 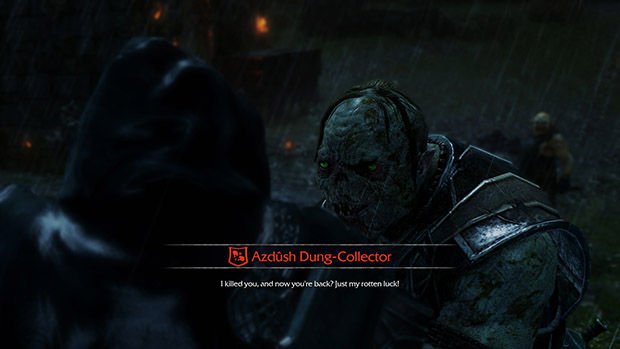 I played Mordor for more than ten hours before I realized there was no quick reload button or way to start over at a checkpoint. I never noticed that basic feature was missing because I never felt to urge to take advantage of it. Sure, I was annoyed every time an orc took my head or skewered me on the end of a pike, but I was also interested in the story that was slowly taking shape with each dirt nap. I liked how the orc that killed me grew in power, and that I could look forward to repaying the favor. Or how the other captains capitalized on my time in the grave to hold lavish feasts or settle scores with rival orcs. I wanted to get back in there and dish out some steely vengeance. I wanted to single out the most ambitious or troublesome of the bunch for execution, or to forcibly convert them to my side and build the strongest orc army ever. I never wanted to hit reload or take a do-over, I wanted to keep going.

In most games, failure is, at best, a waste of your time. You get killed, see the Game Over screen, hit continue, and try again like it never happened. In many games, death doesn’t just waste your time, it will add insult to injury; you lose half your gold or ammo, or have to repair your gear. Or you can continue, but you’ll get a shitty ranking at the end of the stage or even at the end of the game (thanks Metal Gear). In any case, if you’re like me, you’re probably going to be mashing through menus and starting over from the closest save file as fast as possible. We’ve been trained to do it.

Mordor breaks the mold. In most games you want to play as perfectly as possible, but inMordor, not only is death not the end, you’ll probably have more fun ifyou take the occasional dive. You’ll have more interesting encounters with orcs you’ve crossed swords with in the past, and the orc political map will move around more instead of falling into stagnation.

Yup, they found a way to make death fun. How cool is that? 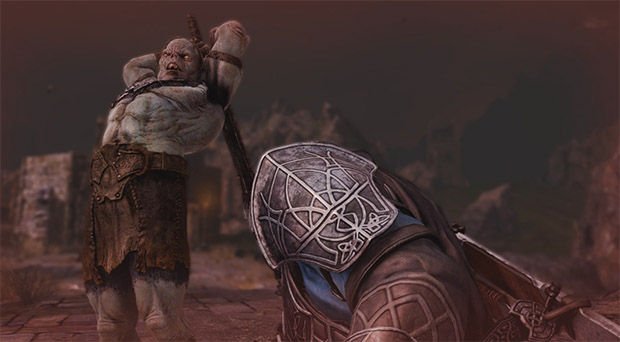 Narrative content is expensive and time consuming. It takes a lot of effort to put together an awesome quest in an RPG, or a kickass action sequence in a shooter. It’s one of the reasons so many games will crutch on meaningless fetch quests or sealed arena shooting galleries. Gameplay elements that are cheap and easy to put together and will pad the playtime of a title. It’s why so many open-world games “that let you do anything” often feel boring and empty, because “let you do anything” is code for “kill everyone in the village and then reload from last save.”

Mordor‘s Nemesis system offers an interesting in-between. It builds procedurally generated content that feelslike narrative. It’s a way to let the game and the player build their own story outside of the main plot, without having to devote tons of development time to individual story hooks and set-pieces. It leads to all sorts of awesome personal moments and memorable characters (like my pal, Azdush), creating cool stories to swap with other players — who will have their own tales to tell. It’s a trick, a veneer of narrative pulled over the typical Arkham/Assassin’s Creed exploration and combat, but it’s one I don’t mind falling for. It makes the game feel more alive, more interesting, and I’m excited to see how far they can take the illusion.

It’s new, it’s different, it’s something I’m not sure would have been possible on the last-generation systems, and to me, that’s a breath of fresh air. 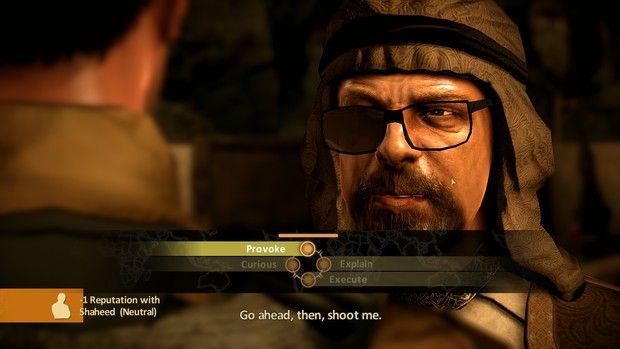 I love any game that lets you cultivate relationships that change the way the story plays out, the more dynamic, the better. I put up with Alpha Protocol‘s many flaws because I enjoyed wooing spy ladies with my suave charm and creating lifelong enemies with somewhat less charm. It was mind blowing when Mass Effect let me take the choices and relationships I built in one title and carry them over into the next. I loved how the Dragon Age games would twist the knife and put you in situations where you had to choose between friends, and how their attitudes towards you could affect the outcome of those tense moments.

But as cool as those games and the choices they offered were, they were always fairly obvious. They came from dialog trees, binary choices, or obvious piss-off moments (“Hum, is the battle nun in my party going to be upset when I desecrate the holy grail with dragon blood? Nah.”). I’d love to see games take the groundwork built with the Nemesis system and run with it (and please, lets find a better name for it before we’re referring to every game with a similar system as “Mordor-like”). It would be great if next year’s games all found a way to neatly fold more relationship- and history-building moments into the gameplay itself, and feature fewer blatant “MAKE YOUR CHOICE” cues.

Granted, the system at work under the hood in Mordor is fairly simple. You burn a guy, he’s gonna show up later with burn scars and an attitude. If you chicken out and run from a Warchief? You can be sure he’ll remind you of your cowardice next time you see him. It’s pretty easy to peel back the layers of how the system works after spending some time with the game, and to be fair, orcs aren’t the most nuanced bunch to begin with. But imagine what more iteration and a different setting could do for a mechanic like the Nemesis system like that. Mordor is only the first step, and while I’m totally in love with what it is laying down now, I can’t wait to see the games that will be coming out two or three years from now that will expand on that system. 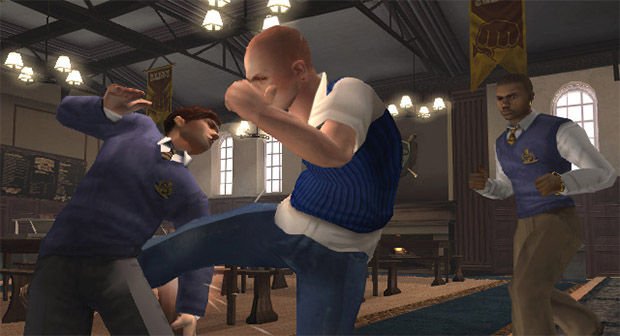 Imagine an espionage game like Alpha Protocol that lets you threaten other agents and goons into giving you information or sabotaging a target. Missions that could be randomly interrupted by an enemy you made on a previous job, or a mysterious ally lending a hand in exchange for a favor. Or how about you transplant the orcs social power struggle system into a game like Bully, where no-name punk kids could climb to power one atomic wedgie at a time? (It isn’t a huge jump to make, high schoolers are basically orcs when you think about it.)