Except now she’s a cop, or something

A new fighter has been added to the roster of upcoming all-gal brawler SNK Heroines: Tag Team Frenzy. The new entrant is none other than King of Fighters XIV and pachinko star, Love Heart, as announced in the new issue of Japanese magazine Famitsu.

Love Heart, who made her debut in pachinko title Sky Love, pilots her flying galleon, the Elicon III, on a quest to avenge the death of her father at the hands of the Skull D. Falcon, captain of the notorious Devil Pirates. Players achieve this, I guess, by dropping hundreds of little steel balls into a slot.

The queen of the skies joined the roster of 2016’s King of Fighters XIV, where she proved herself as adept at hand-to-hand combat as she is at navigation. In fact, she was a little too good, quickly becoming an S-tier character and requiring some early nerfing.

Now, Love Heart returns for another bout of fisticuffs in Tag Team Frenzy, where she appears to have switched her buccaneer gear for a police uniform, having made the obvious transition from inter-dimensional sky-flying to law enforcement. With Love Heart on board, Tag Team Frenzy’s roster currently stands at ten characters. I’m sure we’ll be seeing a trailer for the new challenger soon.

SNK Heroines: Tag Team Frenzy launches September 7 on PS4 and Nintendo Switch. An arcade version of the game is also in the works. 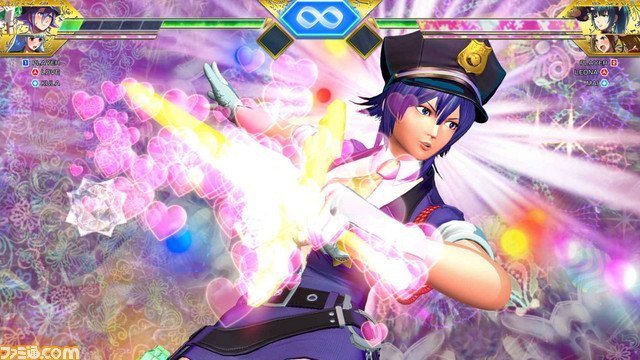