An interview with Spearhead Games

Making a brand new game studio isn’t easy. So imagine the undertaking of creating a new brand, crafting a never-before-seen IP, gathering a production crew, and shipping a game in a year. That’s what Spearhead Studios did with Tiny Brains, and they went through quite the adventure to do it.

I had a chat with Spearhead’s Simon Darveau and Malik Boukhira to find out what makes an indie studio tick, what they’ve learned so far, and what they have planned for the future. 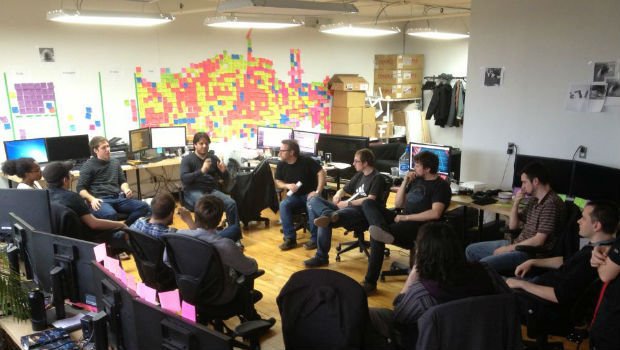 Destructoid: So tell us a little bit about where you guys came from, and why you decided to start an independent studio.

Simon Darveau: Basically, we are both from AAA studios. We both worked at Ubisoft on most of their major franchises, and specifically, I was the lead on the Assassin’s Creed IIInaval sequences. Malik also worked for EA. The game industry is shifting into a totally new direction, so what we felt is that we’re ready, and young, and we felt like we mainly wanted to “spearhead” and be part of the future. We needed to take some risks to make a new fate and try a new direction. Tiny Brains is a fairly unique game, so the first thing we learned is how to develop a game from scratch. Building a new IP from scratch and building a new team in one year is pretty tough, and we’re proud that we were able to do that. We’re also working on something much crazier in the near future. You can have a lot more fun with an independent studio as well — we really feel like a team and are able to work together.

Mailk Boukhira:We have a lot more flexibility and possibilities as an independent studio. We have very little limitations in terms of trying new things. We wanted to try new approaches to game development, and since it was the first time ever we went from conception to shipping a game, it was a unique experience.

When did you come up with the idea for Tiny Brains?

Malik: We were basically playing co-op games together with friends, and since we’re all gamers we really enjoyed our time together. But eventually we ran out of co-op games to play together, and since we were all game designers, we all started to think about what would make a great co-op game. So when we started Spearhead, our first idea was to make a co-op experience, which was something we’ve been dreaming about for forever.

Simon: I kind of realized that. The first thing we came up for Tiny Brains was the environment for the game. Then we nailed gameplay first, and made sure co-op worked naturally and that every player could have fun. Then we tried to find levels that would fit.

About how long did it take to work on the game?

Malik: About a year, which included finding a place to work, and creating the game.

Simon: And we kind of realized that the online play was a lot harder than it seemed. It took around 30% of production to get down online play. I was kind of burnt out, and I said to myself “this is so hard to do,” but it’s nice that we got it out of the way, since it’s probably the hardest thing I’ve done in my life.

Malik: We hadn’t fully worked with our own online functions before on our own game, so it was tough. 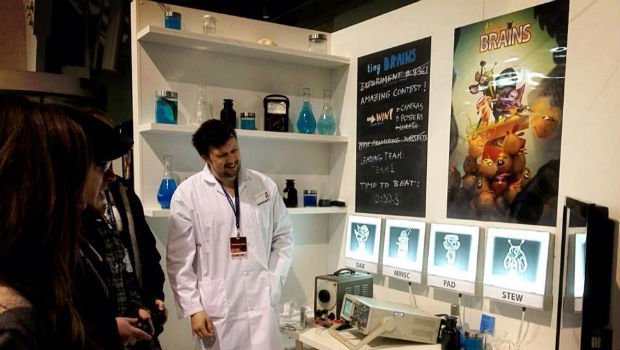 Tiny Brains has only been released on the PC and Sony systems so far. Has working with Sony been a good experience?

Malik: It was pretty cool actually. They were very helpful throughout the process. I met someone from Sony very early, and the existence of the game was in prototype form at that time. But even then Sony was very helpful with providing us with the tools we needed to actually realize that. I met someone at Sony at PAX Prime in 2012, and from there went to present our game that next year.

Simon: They were very genuine. We barely even had a company, and Sony was still supportive.

Is there a particular reason why the game isn’t on Wii U or 360 yet?

Malik: We definitely feel like the game would work on Nintendo platforms, especially on the Wii U. But for us, we never seem to find an avenue to get on the Wii U. Whether that’s getting in contact with Nintendo or getting the game on the platform, we’ve found that it’s easier to work with Sony in particular. Right now the 360 version will be driven by a business consideration more than anything. We’d love to have it on XBLA since it looks like it fits on the platform. I would say Microsoft has been more receptive than Nintendo — but Microsoft is still in the older way of thinking on the 360, with the heavy approval process that the Xbox One system doesn’t have anymore.

Simon: Nintendo’s classic games really influenced our game and we are fans, but yeah, it’s tough to spread ports around as well. We only have 12 people on-hand, and it’s tough to spend how to find our time. Much of our work is inspired by Nintendo however.

What happened specifically with Nintendo?

Malik — We actually contacted Nintendo at GDC, to see how we could get our game on the Wii U. But the follow-up wasn’t as sufficient as we needed to be, and since our turnaround time was short, we needed to move forward with more receptive platforms. It would have been great, but it didn’t work out. 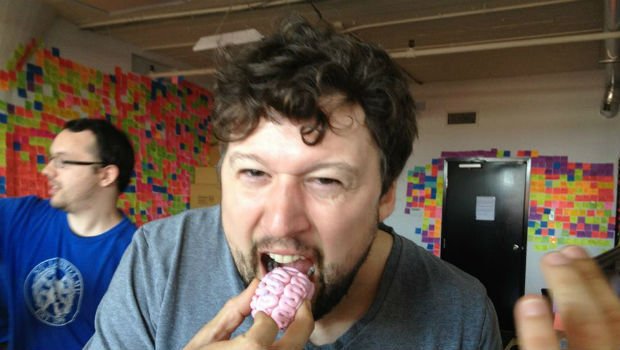 What was the reasoning behind releasing it on PS4 first?

Simon: It was a partially attempt at getting more visibility with a brand new platform, definitely, since we’re so small. We’re all learning right now as well since we’re an independent studio, and we have to evolve and learn about so many topics, like for instance, PR and promotion. It’s crazy how much you change when you start a new studio — we were former AAA developers and felt like we had a handle on our craft — but once we went independent it was overwhelming in many ways.

Malik: It’s also a practical issue. We had to delay the PS3 game to get onto the PS4 since we’re so small. It would have been nice, but we have to remain practical as well.

How does the Cross-Buy system work exactly? Do you decide to make it Cross-Buy and then Sony says “okay?”

Malik: That’s pretty much how it felt to us. There’s very little to do other than just requesting it.

Simon: It was just natural. I don’t like the idea of having to purchase multiple copies on the same platform so we requested it.

Would you say Tiny Brainshad a successful launch?

Simon: My personal take is that honestly, it’s an outstanding success given that in one year we build a team and released a game on three platforms. Doing that is almost unprecedented. But, we were also hoping for better Metacritic scores so far on the game. Next time we’ll do so much better that they won’t even expect it. We have boiling blood because we want to address any problems with the game so much. 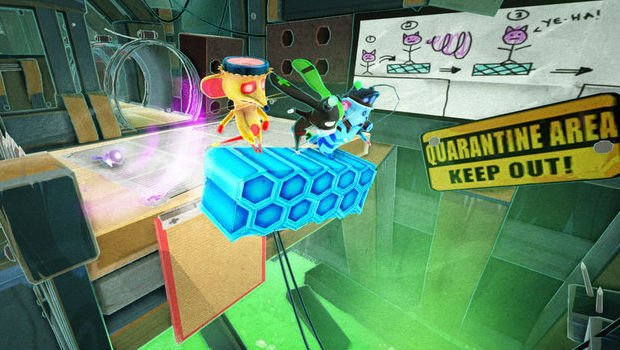 How would you rate the sales, specifically?

Malik: I’d say below expectations, but that’s also proof that we have a lot to learn on everything that has to do with the gaming industry, not just making a game, but beyond that. We’re also very motivated now.

Simon: We don’t have any specific figures, but we need to find more ways to build, grow, and interact with the community. This is one process we’ve put a lot of energy into. We’re still brainstorming, and it’s such a thrill to work in this organic way and have fans participate. I think in 10 years we won’t be able to mention development without community. Basically I just feel like right now the creation process isn’t on par with on the technology we have now. This is one of the topics we’re getting a lot of feedback on now. We’re doing a weekly show on Twitch, and this is our first step in a new direction.

Would you consider adding the game to PlayStation Plus eventually? How beneficial would that be sales wise?

Malik: That’s something that’s a discussion with multiple people, like the publisher, and Sony. It’s definitely something we’d consider, because to us, having people play our game is quite interesting and important. So having an arrangement with PlayStation Plus is something we’d look into.

Simon: The relationship between indies and Sony feels like a real partnership. It’s more of an open discussion rather than a business negotiation. Sony works with you to promote your game and does a great job of it.

Can you say anything about potential DLC for Tiny Brains? 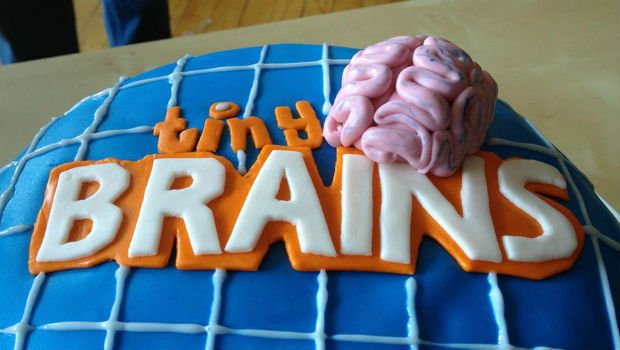 Speaking of Tiny Brains, do you have a favorite character?

Simon: Visually I love Stew the rabbit more than anything else. I love the floppy ears, but gameplay wise, I’m a fan of Dax — and the future will be great for Dax fans.

Malik: Dax I’m a huge fan of visually. But Pad the mouse with his teleportation power is my favorite.

Thanks for your time, and congratulations on shipping your first game, guys.