Our first look at the overhauled environment

Though it’s quite endearing the current visual style of SpyPartysorta looks like crud. We already know that the game is getting an artistic revamp, but so far we’ve only seen the new character art. Well, of course the environment is getting a similar overhaul, and I’m here to tell and show you just how it’ll look. The screenshots provided showcase two maps: one modern in design, the other traditional.

I got to speak with Chris Hecker, the man behind SpyParty, about the new art style and just how much went into making it and what he’s trying to achieve with it. 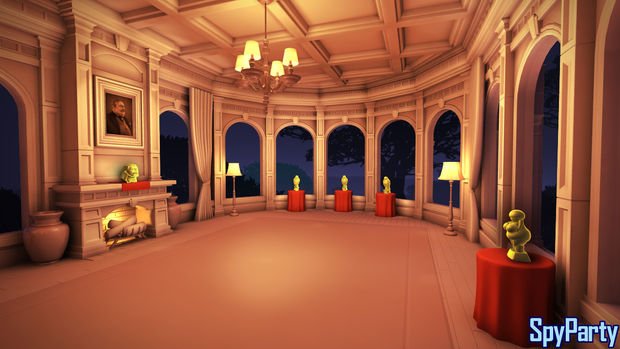 First thing to note: if you cycle through the screenshots in the gallery, you’ll notice that the ones from outside the maps are the sniper’s perspective, in order. These concepts are more than just “hey this is probably what it might look like one day maybe,” and instead have a lot of thought and design embedded into their core. Also each statue, now that it has more polygons, is a recognizable and famous statue! Apparently that’s what they represent now, but you’d never really know it.

Speaking with Chris Hecker, he made sure to note the warm vs. cool aesthetic visible in both of these maps. If you analyze both of the maps, you’ll notice that all of the areas that the spy can be are a nice bright warm tone, while the sniper areas are much cooler and dark. The way the shadows work are also different, solidifying the stark contrast between the two players. It’s a small touch that many people (myself included) probably won’t even notice at a first glance, yet it helps solidify the dichotomy between the two players without also being too blunt and obvious.

Another thing to notice is how the statues have a sort of extra glow to them, making them stand out even more than the rest of the background. Mr. Hecker said this is intentional and draws inspiration from old cartoons like Scooby Doo, where you could always tell what objects in the scene were going to move because they were drawn on top of the cels instead of being part of the background. The sniperknowsthat the spy will likely attempt to interact with the statues due to the objectives and will already be looking at them and waiting for something to happen – just like when kids wait for a vase to fall over because it’s way brighter than anything else in the shot.

Mr. Hecker used the words “illustrative” and “timeless” to describe the art style. Illustrative refers to the fact that the art isn’t realistic, yet isn’t quite a cartoon. It’s somewhere in between, more akin to an illustration. Hence, illustrative. The timelessness is evidenced by the two different styles of maps used to demonstrate the art: one modern and the other traditional. Both of the maps really evoke the appropriate feelings and tones; the modern is smooth and sleek while the traditional is rustic and filled with rough corners. 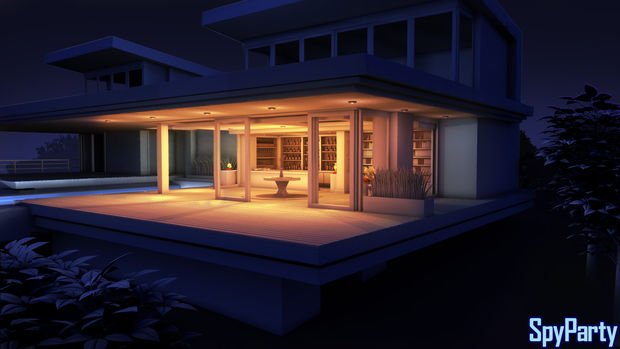 I also asked about the conversation circles, which indicate where a spy player can stand in order to join in a conversation. It’s a large part of the spy’s game, but I thought it might detract from the pretty and smooth visual style of the environment. Chris told me that they will still be there, though they won’t be the “jaggy OpenGL” rough circles they are now.

While these shots are concept-only, they are a very nice indication of what’s to come. If you’re headed to PAX Prime, you’ll be able to see the new art in action. If not, just make sure you’re participating in the less-pretty-but-still-intense open beta.