[Update:The same day this story went live on Destructoid, an update launched for Stardew Valleythat alleviated some of these concerns. For starters, outside of festivals and special events, the game will now quick save when you close the app. Fishing is slightly easier than before and there are multiple control options, including a digital joystick and button, that players can switch between on the fly. Not every control option is equal — the invisible joystick and buttons can be frustrating — but these additions are only improving an already great game. Now, how do I woo Shane…]

ConcernedApe really knocked it out of the park with Stardew Valleyin 2016. It’s the farming sim everybody wanted to play, and very slowly developer Eric Barone and publisher Chucklefish have put the title on as many devices as possible. Now it’s come to mobile, and while this is the full game people have enjoyed on those other devices — with no in-app purchases to speak of — Stardew Valleyon mobile still has some kinks to work out to keep on par not just with other ports of the game, but with most other games on the mobile market.

At this point, I’m fairly confident I don’t need to explain what Stardew Valley is. It’s been out for more than two years, has sold more than three million copies, and is on every major console on the market as well as the Vita. We all know Stardew Valley, we all love Stardew Valley, and with this beautiful mobile port, more people than ever can experience the joys of farm life in Pelican Town.

Stardew Valleyon iOS is the 1.3 version of the game, released over the summer on other devices, but only for single-player content. That means the Night Market is here, as well as Christmas decorations, indoor farming, and hats on horses. As of right now, it’s possible multiplayer might come to mobile devices, but only after The Secret Police finish porting the game to Android.

When porting a traditionally PC or console game to mobile, the biggest decision to make is how to handle controls. Many games opt for something resembling the control schematics of their original versions — touchscreen control pads and whatnot. Stardew Valleysettled on a point-and-click approach to gameplay and for the most part, I quite like it. You can touch any square on the map and your farmer will move there or hold down to keep them moving continuously. Want to talk to somebody? Just tap them and your farmer will run right over. Handling the fields is mostly contextual as your farmer will switch tools depending on what object you want them to take care of, but be warned this isn’t perfect. I lost a few crops in the early days of my farm attempting to water them when my farmer would instead strike them down with the sickle. If this wasn’t such a lackadaisical game, I might have been upset. 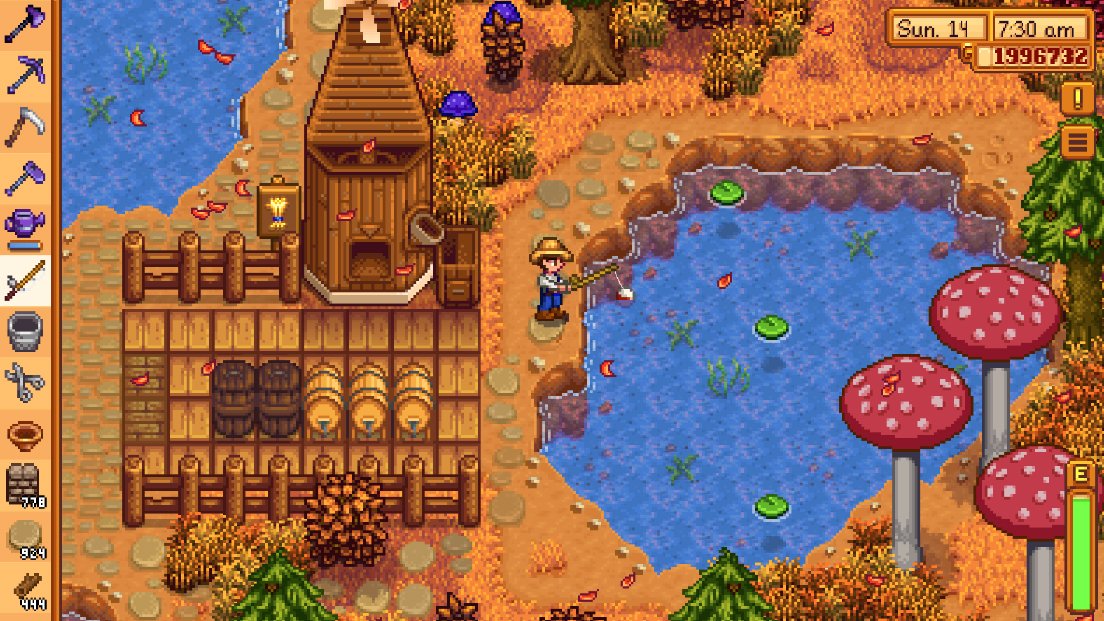 It’s not all wine and roses, however, as the move to touchscreen-only controls doesn’t lend itself well to every aspect of the game. Early on, fishing can be a bother trying to keep the reel over the fish as it bobs up and down on the meter. I wasted a lot of in-game time those first few weeks failing to bring in any fish because of how finicky the system can be. Combat could also use another pass as neither auto nor manual attacks work well when facing off against mobs. I can make it and out without losing all of my health, but doing so was a lot easier for me when I last played this game on my Mac.

By far, my biggest concern with the port is the save system. Mobile gaming tends to be something you can pick up or put down at a moment’s notice, that’s the beauty of the system. Stardew Valleyhues too closely to its PC roots in that it doesn’t save automatically. You have to go to bed, just like in the original game, to save and depending on when and where you’re playing this, that can lead to lost progress. I personally lost an entire day of farming after I forgot to save while getting off the train for work. I know programming save files isn’t easy, but a quick save feature would be a godsend here.

If you’re looking for a portable version of Stardew Valley, and you have a Switch, go with that port as it’s the best way to experience this game by far. But if you don’t have a Switch or you’re like me and curl up every night with your iPad before bed, you really can’t go wrong with the mobile version. It looks absolutely stunning on a retina screen and, for the most part, its conversion to touchscreen controls is acceptable. Now all I can do is hope The Secret Police continue to adapt this game further for a mobile audience and implement some of the features we’ve become accustomed to on our smartphones.

[These impressions are based on a retail copy of the game purchased by the reviewer.]