A few months back at E3, I was lucky enough to be able to get my hands on both the retail version of the Oculus Rift, as well as the PlayStation VR, back then known as the Morpheus.

As a big fan of VR in theory, if dubious about the tech in practice, I was impressed by the leaps forward being made in frame rate, resolution, comfort, and responsiveness by both manufacturers. Both headsets were fairly impressive leaps forward from early development kits, and far closer to what I imagined would be a viable version of VR for the average consumer.

This past weekend at EGX I got to try Valve’s VR headset, the HTC Vive. Holy shit, the Vive blew the competition right out the fucking water.

Over the past few months I’ve heard people evangelizing the leap in technology that the Vive represents. Stories of developers crying, journalists shaking, and the general public speechless. I went into my hands on demo with the Vive dubious. I came out a shaken, crying, speechless VR evangelist.

So, where to start. I was brought by a couple of staff members into a large, square, empty room. A small computer sat tucked away in one corner. Otherwise, the roughly 12-square-foot room I was in was completely empty. 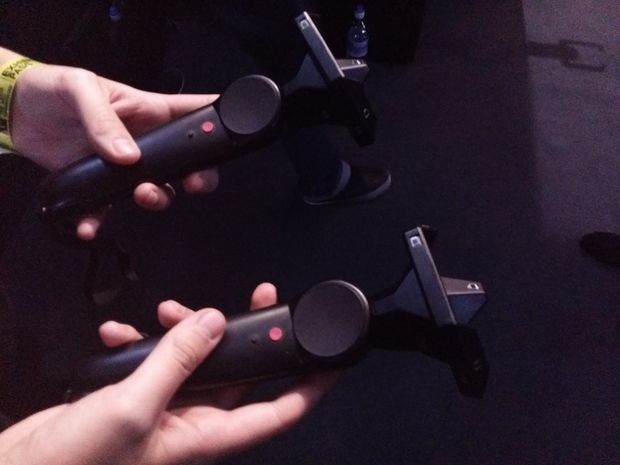 Before trying out the headset, I was handed a pair of controllers and shown how they worked. The controllers featured a pair of clickable track pads on top, triggers underneath, and a weird angular antenna on top to facilitate 1:1 motion controls. Oddly, considering how closely I had been following the Vive, this was the first time I had actually seen the Vive’s dedicated motion controllers.

Once I had a handle on the controller layout, I was told to put on the headset. Much like the competition, it’s a single set of elasticated and solid straps that’s fitted by sliding it simply over the top of your head.

The Vive was by far the most comfortable of the VR headsets I have worn to date, although it lacked the retail Oculus’ built-in headphones. As a result I also had to find the pair of external headphones once the set was covering my eyes, ensuring they were on the correct ears so that sounds would emanate from the correct locations. This is a very real drawback to headsets without built-in headphones.

Straight away, as soon as the demo selection screen was booted up, I could see that the Vive was going to be a step above the competition. The 1:1 motion tracking of the pair of controllers was superb, with no disconnect whatsoever between where my brain new my hands were, and where it could see them in game. Head tracking was unbelievably fast and responsive, and I had no issues at all with needing the headset centered. Everything was working flawlessly right off the bat. 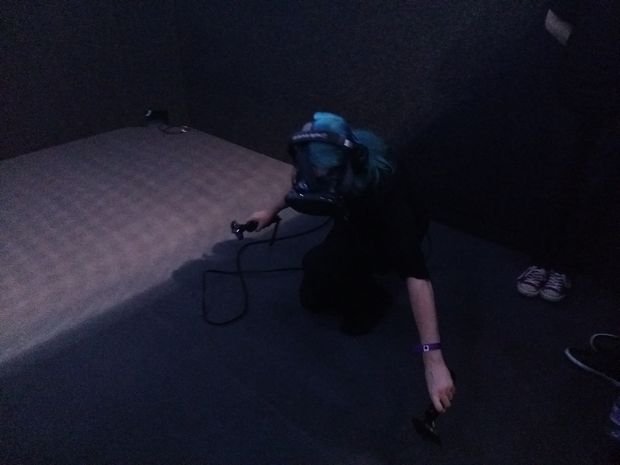 The first demo shown off had me stood on the deck of a sunken ship underwater. I could walk around the deck by walking around the room, with a checkered grid of blue lights appearing if I got too close to the physical edges of the room. I wandered around the ship touching fish, interacting with the ship using my hands, and eventually stood face to face with a whale, who followed me with his eyes as I walked around the deck.

I looked down off the edge of the ship into the dark chasm below, and I felt a pang of terror flood my system, quickly stepping back from the sense of height.

This first Vive demo was the first time I have found myself truly immersed in a VR world, an experience best equated to a Star Trek Holodeck. I was walking around a world, interacting in a way that felt tangible. I felt a physical connection between my body’s movements and the world I was exploring. I truly felt like I was exploring another world.

This connection to the game world was in part due to the impressive tracking of my body in 3D space, but also in part just down to the technical specs of the device. The resolution was crisp, the field of view was wide with minimal visible edges, the audio was coming from the right locations relative to my position in the world, and everything was responsive enough to avoid pulling me from the world.

This was everything VR immersion could hope to be. 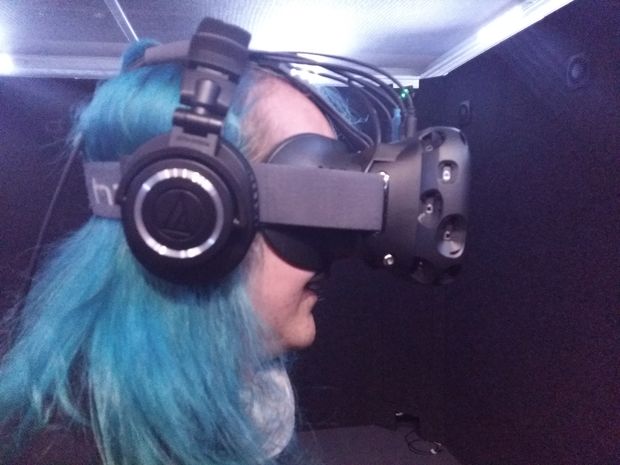 Over the course of the following thirty minutes, I explored a number of virtual worlds. I built machines out of physical parts, stretching them to fit my needs and slotting them into each other. I finely chopped vegetables and put them in a pan to make soup. I drew physical waves of glowing art into the air and explored them from differing angles. I was drawn into a virtual space that felt unbelievably real to me. I even explored an Aperture Science lab and caused untold havoc.

Then, I had to remove the headset.

It dawned on me I was in an empty room.

It dawned on me I had spent the past half an hour wandering in circles around an empty room.

It dawned on me those experiences, which had felt so real, were gone from the room that had been my escape from the busy, loud, stressful convention that once again surrounded me.

I found myself shaken in a way VR had not previously left me.

This was a game changer. 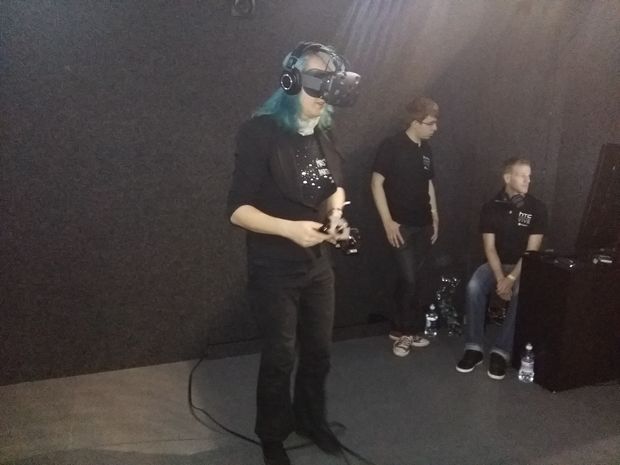 With all this said, the experience I had with the Vive left me dubious if that same magic could be captured in a consumer setting. As stunning and immersive as the experience was, I could see the places where a home VR experience is likely not to stack up.

The demos shown were all set in set-piece environments that were single square boxes, which limits the experiences available to the player. Most consumers don’t have an empty room in their homes that’s as large as this room was available to use as a dedicated VR room, which it currently feels like the Vive would need. The encouragement to walk around the room also meant I had to constantly be aware of the cable attached to the back of my own head and trailing behind me on the floor.

These are all serious barriers to replicating the experience I had in a home setting.

Still, I walked away from my time in the Vive headset sold that a Holodeck-esque VR future is attainable. The experience I had was the first time a video game has ever truly made me forget the physical world around me, immersing me entirely in a new set of worlds I felt unbelievably connected to.

Compared to my demo experiences with the Oculus and PlayStation VR, my demo of the HTC Vive felt like something in an entirely different league. If only that were an experience I could bring home and replicate.