But you can still play it by yourself if you want

Lara Croft and the Guardian of Light was pretty fun for what it was: a new take on the beloved character where you’re running and gunning with a friend through all sorts of dangers.

Now, Lara Croft and the Temple of Osiris is bringing that same formula over to the Xbox One, PlayStation 4, and PC, with the major addition being four-player co-op. Quadruple the fun!

The story revolves around Lara (the voice actress from Guardians returns) and another archeologist accidentally freeing Osiris, the Egyptian god of death. They also end up freeing two Egyptians who want to help send Osiris to hell. Or whatever Egypt’s version of hell was back then.

Those coming in from Guardian know what to expect here. You’ll use the right analog stick to aim your variety of guns, shoot with the right trigger on the fly, drop remote-control bombs, do rolls to get through traps, and of course you can jump around to get to higher ledges and such.

The grappling hook returns, and plays a big part in co-op. You can hook on to other players which will allow them to climb up or lower themselves down ledges, or it can be used to hook to far away objects so players can tightrope walk across large gaps.

The Egyptian characters, on the other hand, have a staff they’ll use to destroy big objects blocking the path. They can also turn on this energy shield which a character like Lara can jump on to and use to grab a ledge that would otherwise be out of reach.

On top of all that is a player upgrade system to gain new perks and abilities. There’s also an amulet system where one player can buff the entire team. So for instance, I was able to equip an amulet which added fire damage to all of my teammates’ projectiles.

Co-op is completely drop in/drop out, and the levels will change to reflect the amount of players. One example I saw was a certain section that had pressure plates. Two people needed to stand on them, but if there were more players, there would have been more pressure plates to reflect the player count. You can also totally play alone too. 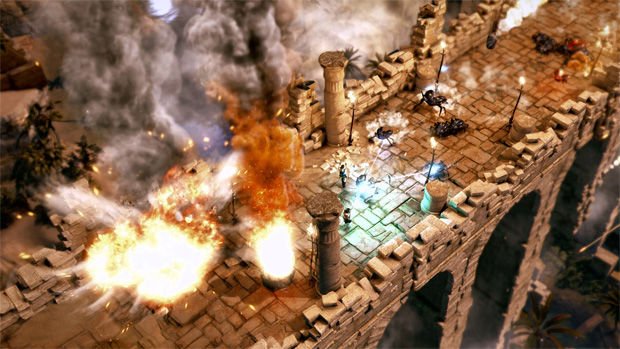 The demo ended with a big ghost crocodile beast chasing us through the level. It was fairly intense, as there were a ton of traps and enemies obstructing the path, and one misstep would see the crocodile smashing you beneath its feet. You’re able to quickly respawn though, so long as at least one person is still alive.

The new Lara Croft seemed enjoyable from my hands-on time. More of the same, but that’s not a bad thing when the original was pretty fun.