‘Whatever kind of baggage you carry around with you, you’ll be able to express that in the game’

Nestled in a parking lot across the street from the convention center in Los Angeles was Devolver Digital’s phalanx of air conditioned campers. The publisher had a good mixture of highly anticipated titles like Hotline Miami 2 and Broforce, and more recently announced titles. The Talos Principle is one such game, and as usual, Devolver knows how to curate good content.

Though it is being developed by Croteam, which is probably best known for its over-the-top first-person shooter series Serious Sam, The Talos Principle has more in common with Portal. Its first-person puzzle platforming is not built off the most mindblowing ideas, but it is only part of the focus. The rest is on a deeply philosophical narrative, courtesy of Tom Jubert, who delivered a fantastic story in my favorite game from 2013: The Swapper.

Suffice it to say, I left the camper with fairly high expectations for this. 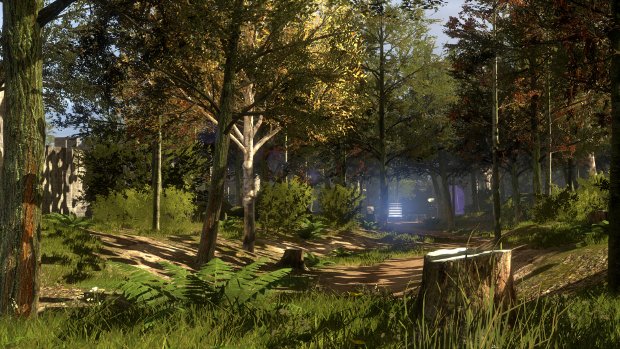 The Talos Principle has three main parts to experience, though they run together throughout. Most of the core gameplay involves solving puzzles from a first-person perspective, using various gadgets scattered around the environment. The puzzles are self-contained, so the player knows when he is entering and exiting a particular puzzle, and that any given challenge can be completed without using outside items.

There are several tools and traps that appear in the puzzles, though the ones shown during the vertical slice were a bit on the mundane side. There were impassable energy barriers, automated turrets, and tripod-mounted jammers that would shut either of the former down. There were lasers that needed to be shone into detectors, and beam splitters to redirect them.

An early puzzle involved three barriers but only two jammers. Picking up a jammer deactivates it, so players cannot just walk through with one in hand. The solution involved pointing both at one barrier, allowing the player to sort of leapfrog them past one another. It was simple, but still satisfying to figure out and implement. The puzzles do get more difficult; one of the later puzzles required me to get a tip from the developer in order to solve it before the appointment was up. 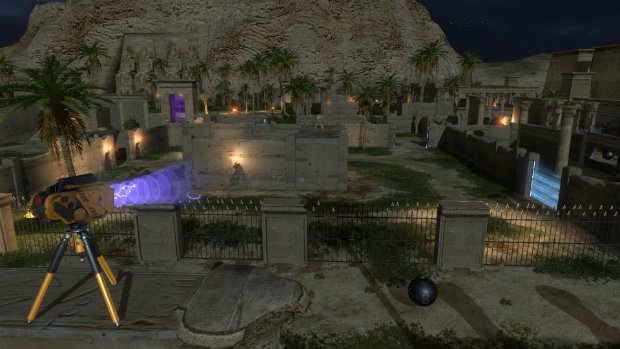 By solving puzzles, the player gains tetrominoes, and once a set is acquired, they can be arranged into blocks at specific terminals to unlock new sections to explore. That said, progress is not locked to any one specific puzzle. If a player is stumped, he can save it for later, explore elsewhere, and move on.

Exploration is a key component, because a good portion of the philosophical questions are delivered through it. Jubert’s goal in crafting the story was to make it a personal affair, with the idea that “whatever kind of philosophical baggage you carry around with you, you’ll be able to express that in the game.” Part of the time, a godlike voice in the sky will talk to the player, and part of the player’s expression is that he can choose to listen or ignore the voice at will.

More interesting are the data terminals scattered throughout, which allow the player to interact with an unknown entity on the other side. Upon walking up to one such terminal, the protagonist’s hands are shown as fully metal, robotic facsimiles, hinting at a theme of artificial intelligence. The terminal is then interacted with in the form of dialogue trees, but one player’s experience can vary from another’s pretty substantially. Jubert explains, “Because everything is philosophically focused, we can actually go into a lot more depth and give you much more genuine agency within that. So, you can come to this as someone who believes in God and have a largely different conversation and relationship with this character than another player would.”

Jubert continues, “You can try and defend your ideas while he challenges them, you can give up on them and tell him he’s right, you can do a bunch of things and he will do his best to remember. Philosophy isn’t the sort of thing you can do very easily by just shouting at someone.”

Therein lies the hidden strength of The Talos Principle. By using dialogue trees in this way, the game intends to discuss philosophy through conversation with the player, rather than through a single rehearsed monologue. Though a lot of the player’s attention will be spent in solving puzzles, Jubert and Croteam also want the player to think about issues centered around personhood and its relation to advancing technology.

Jubert closes, “Most of us think that by being persons who are self-governing and make our own decisions, that makes us different from everything else. That makes us moral beings. As we look forward, we’re going to have a lot of very difficult questions to solve as soon as we start with genetic manipulation and fucking around with people’s brains. These are going to be really political hot topics in the next hundred years. It’s pretty fucking shocking to me, having to discuss them in videogames.”

It sounds like it is aiming to be very thought-provoking. My one concern at this point stems from Jubert’s previous work. One of the reasons The Swapper was so incredible was its marriage of gameplay and theme, in which each fed off the other in a very meaningful way. It is not clear yet how closely the puzzles will tie in to the narrative of The Talos Principle, but if Croteam and Jubert manage to pull it off, this could end up as a great example of videogames as a powerful form of philosophical expression.