Timeless is currently in limbo, and it's all your fault

Seriously, why didn’t you watch more of it?

Time-travel and comedy, two things that go hand in hand like peanut butter and jelly, bacon and eggs, or rum and coke. We’ve seen the popularity of films like the Back to the Future trilogy, Bill & Ted’s excellence in the genre, and Army of Darkness’ following. Likewise, Dr. Who has been a mainstay of British television for more than fifty years.

And so it goes without saying that NBC’s Timeless tries to get people to tune in as it deals with predominantly US history using a mixture of socio-political quips and jabs. Sadly, best efforts don’t usually translate to unparalleled success as the series finds itself in limboonce again as NBC has yet to decide whether to renew it or not.

And it’s all your fault. Why didn’t you watch it? 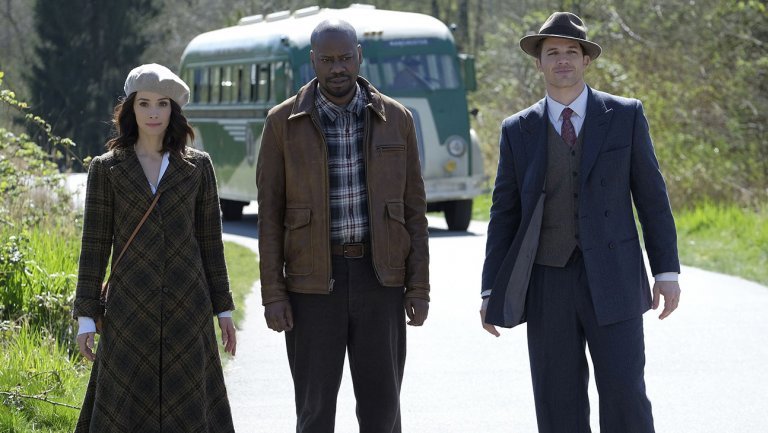 I mean come on! Wouldn’t you love a show that blends the overused deus ex machina of a time-travel machine, the common trope of a conspiracy-shrouded organization, and the controversies of history while doing all of that with such gusto and quirkiness? That’s basically what Timeless is about — a fun romp through history where one needs to suspend disbelief in order to enjoy it; an adventure show with some light comedy and drama mixed in for good measure.

Time-travel complexities? You got none of that — all you need to ensure is that you don’t wind up in a period where you already exist. You also cannot go back to the same destination as before aboard The Mothership (the grand machine itself) or The Lifeboat (it’s low-quality counterpart which our heroes are using).

Evil organization hell-bent on world domination? They have one in Rittenhouse — but it’s not as taxing as facing off against Agents of S.H.I.E.L.D.‘s Hydra, or God-forbid, any of Jack Bauer’s old nemeses in 24. Some scenes even have the villains become more forgiving, where a death threat isn’t so much an immediate concern and more like a slap-on-the-wrist.

And historical jokes are a given, not so outrageous and juvenile as Bill and Ted, but with a combination of both seriousness and snark. For instance, if the team were to end up in some part of America during the early 20th century, Rufus, their African American programmer and pilot of the Lifeboat (played by Malcolm Barrett), might quip that he’s going to be in a lot of trouble “if white folks see him all alone.” The deadpan delivery works at times and is also underscored by the gravity of the situation, such as when Rufus encountered a squad of black freedmen soldiers fighting for the Union during the Civil War. The music shifts to a more serious tone when their leader explains to Rufus that he cannot write, and he would like for him to compose a letter so he can find his missing family. 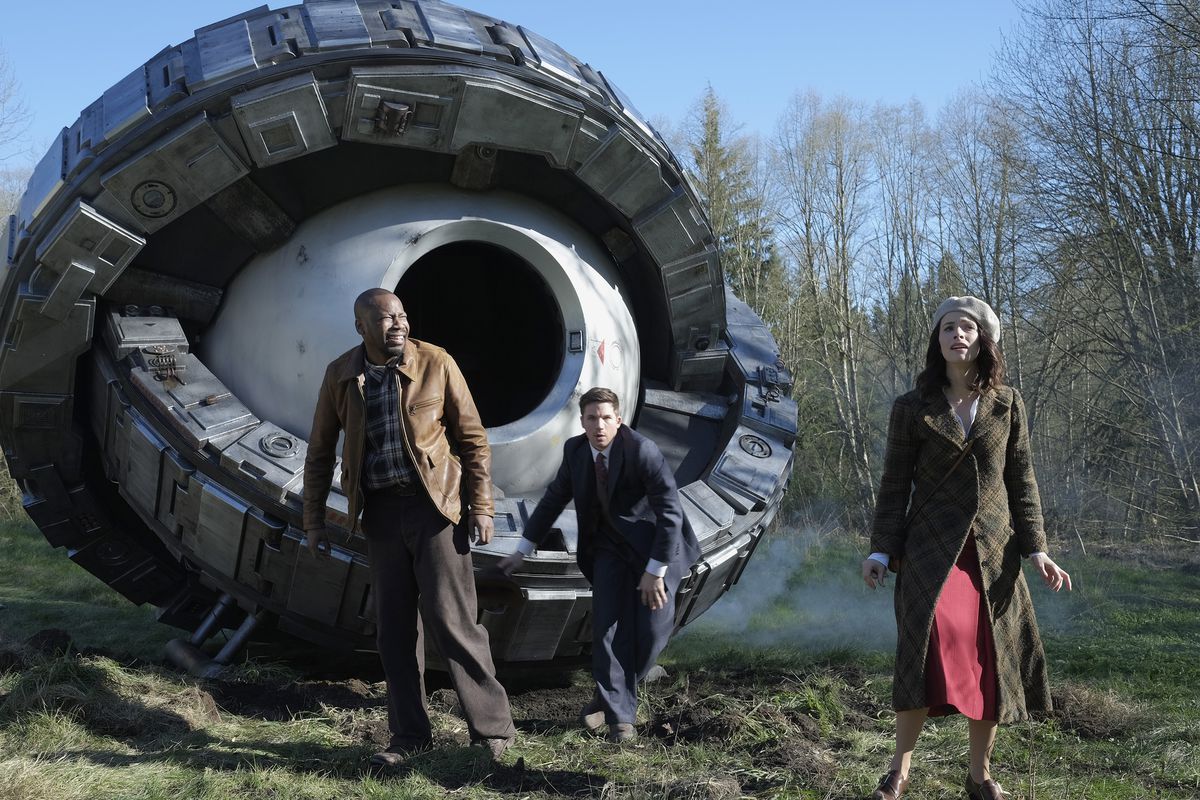 The trio is comprised of the aforementioned Rufus, historian Lucy Preston (Abigail Spencer), whose personal relationships hold a dark secret, and Wyatt Logan (Matt Lanter), who tries his damnedest to save his deceased wife while having an on-screen chemistry with Lucy that’s characterized by tension so hot it can melt butter.

Joining them to form an even bigger collective are Connor Mason (Paterson Joseph), billionaire-extraordinaire — think Elon Musk plus Stephen Hawking minus their technical expertise, Agent Denise Christopher (Sakina Jeffrey) of Homeland Security, essentially their handler, Jiya (Claudia Doumit) another programmer and Rufus’ love interest, and a couple of team members whose identities would spoil the series if I write about them here.

Their adventures include attempting to prevent the assassination of Abraham Lincoln, tracking down the kidnapping of JFK’s mistress, meeting Marie Curie and her daughter Irene in the trenches of World War I, and encountering Bond author and spy-in-real-life Ian Fleming dressed as a German officer in a Nazi gathering.

Perhaps my favorite has been the team’s visit to the 1893 World’s Fair held in Chicago to thwart the attempted murders of Thomas Edison, Henry Ford, and J. P. Morgan (who were apparently part of a secret cabal). Who saves the day? Well, none other than fledgling magician Harry Houdini and his sleight-of-hand tricks. Oh, and not just that, they end up entering the Murder Castle of America’s notorious serial killer H. H. Holmes.

What made the episode hilariously fun was how it had these historical figures just popping in and out, interwoven together with the major event at the time — and further research would prove that, hey, they were actually all there! 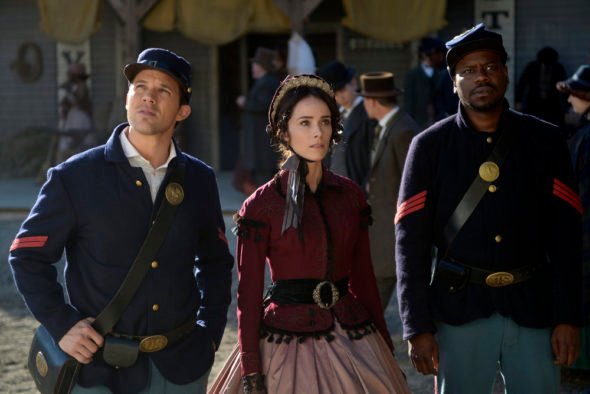 Season 1 dealt with the team tracking down terrorist Garcia Flynn (Goran Višnjić) dead-set on destroying history as we know it, with every episode dealing with the aftermath of each mission, whether it was successful or not. It’s worth noting that, despite its ambitious period pieces, NBC ended up canceling the series, only to be renewed for a second season after much clamoring from fans and pushing from the producers at Sony Pictures Television.

Season 2 begins with an explosive bombshell — literally and figuratively, as the team tries to fight back against Rittenhouse’s centuries-long plans. This time, they’re assisted by old foes and newcomers alike.

The season finale aired last May 13 with two episodes back-to-back and an intense cliffhanger to boot. Sadly, the 2.43 million viewers for both episodes leaves much doubt for NBC as that minor uptick only denotes that the series is in a downswing when it comes to ratings, and the series is in danger of getting canceled once more. Really guys? You’re telling me Keeping Up with the Kardashians has fourteen seasons, and this one is in danger of ending at two? Shame!

UPDATE: We know it’s frustrating to our fans to not have an answer yet re: #RenewTimeless. We’ve been led to believe a couple times that an answer was imminent only to have answer pushed. Unsure if that’s good/bad. Just know we’re fighting hard for #Timeless.

Timeless’ showrunner Eric Kripke even tweeted to fans to demonstrate their support with the hashtags ‘#RenewTimeless’ and ‘#Clockblockers’ (told you these guys loved quirky fun). They even gained a thumbs up from RogerEbert.com, American Idol winner Kelly Clarkson, and comedian Leslie Jones who said she would march nude straight to NBC if they don’t renew the show.

It’s a show that my wife and I have watched every week. What provides a more meaningful connection is that I’m a history nerd and she isn’t — and hey, we both aren’t from the United States so not knowing about every historical figure is forgivable. That means when she starts asking about a certain event or personage, I’d promptly turn into a human Wikipedia which totally turns her on. So if you love history and your special someone isn’t as well-versed, get them hooked on Timeless.

If you haven’t watched it on its previous run, you can definitely catch it still on Netflix or Hulu, and naturally, be one of its thousands of supporters on social media conveying an outpouring of love, and hoping-against-hope to see it renewed. It’s your fault if the show gets canceled (hah!), but hey, it’s going to be one of the proudest moments in your life if you prove that time has not yet run out on the series.