Ubisoft's Roller Champions isn't quite fun and I'm not sure why

Round and round we go

There is no such thing as high-level Roller Championsbecause Roller Championsitself barely exists. Its introduction to the world came last week with an E3 announcement and a surprise technical alpha that was open to everyone. At this stage, everyone’s an amateur.

That’s a tough spot because Roller Championscould shine once players become competent enough to perform cool feats. The problem is that I’m not convinced the framework is flexible in a way that will allow players to continually get better. The skill ceiling might be too low.

Roller Championsis a free-to-play three-on-three roller derby game by way of Rocket League. Well, at least Rocket Leaguefeels like the most obvious analog; the color scheme is nearly identical and both games prominently feature riding on the walls. Roller Championscertainly falls into its own little niche.

The objective is to carry a ball around a track while the other teams tries to jar it loose. If you’re able to complete a full lap while maintaining control of the ball, you can throw it into a goal that sits high on the wall. That’s worth one point. Making it two laps and scoring is worth three points. Three laps and scoring is worth five points. Games are seven minutes long or until one team earns five points.

It’s so much easier said than done, though. The opposing team will do anything to tackle the ball carrier. They’ll feverishly skate to catch up, and they’ll loop back the wrong way on the track. Whoever has the ball can dodge incoming tackles with a single button press. They can jump too. Ideally, the two offensive players without the ball will knock down any incoming attackers. 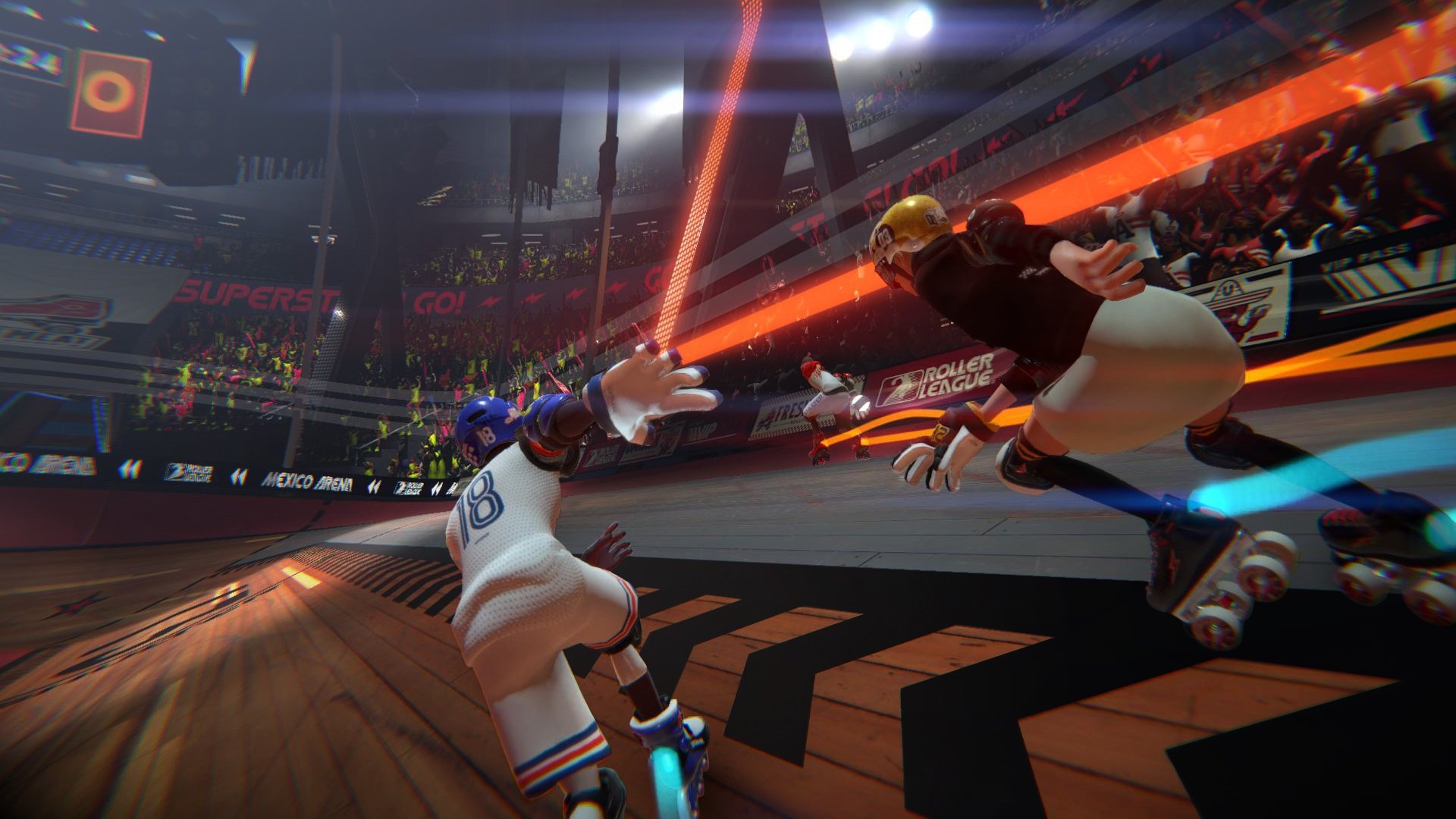 This is the whole loop (pun intended) of Roller Champions. Get the ball, lose the ball, chase the ball, get the ball. It’s not quite satisfying. Maybe it’s the way you frequently find yourself skating backward toward an empty track. Maybe it’s the way defenders have to be so singularly-minded in their pursuit. It just feels like there’s no strategy beyond throwing everyone at everyone else and hoping you come out of the fray unscathed.

That’s why I’m curious to see if seasoned players can eventually turn Roller Championsinto something that’s more akin to an esport. It could be neat to see the perfectly efficient use of downslopes to maximize momentum. Team passing plays around the rink might be nigh indefensible with the right spacing and timing. It would be badass to watch someone perched high on the wall, goaltending any shot that comes close to scoring.

Whether that’s possible remains to be seen. Right now, Roller Championsis missing some sort of x-factor that would make it the sort of game you want to play over and over. Is it something that could be added, a mechanic that could be tweaked, or something more integrally off at the core of the game? It’s tough to say, but Roller Championsleft me feeling like it was more frustrating than fun.