First footage of Viewpoint 2064 since 99

History is littered with the bones of games like Viewpoint 2064, the unreleased sequel to Sammy’s 1992 Neo Geo shooter Viewpoint. The Nintendo 64 project was first (and last) seen at Nintendo’s Space World event in 1999, before being cancelled, uncancelled, and disappearing for good.

Well, maybe not for good. A prototype cartridge for the game materialized last month on eBay, where it sold for nearly $3000. That would probably be the end of the story if it hadn’t been for YouTuberRama Shotton, who contacted the buyer and requested some gameplay footage.

Here is that footage, likely the first to emerge since the turn of the century:

It’s challenging to assess something based on seven minutes of poor-quality off-screen footage, but it appears the Star Fox 64-reminiscent Viewpoint 2064 was at least in a near-finished state.

On August 14, 2000, IGNreported Sammy had plans to exhibit the game at Tokyo Game Show the following month and release it in Japan on November 24. It seems something must have happened in the final months of development to prevent the title from crossing the finish line.

The developerRacdym(now known as Racjin) went on to make a number of Bomberman and Snowboard Kids titles for Hudson and Atlus, and is currently co-developing Final Fantasy Explorers with Square Enix. Sammy merged with Sega in 2004 to formSega Sammy Holdings. 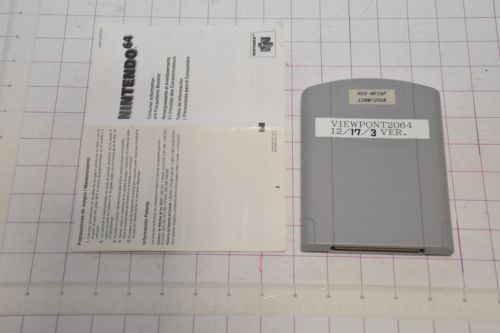